The Dying Light 2 features a bigger map than its prequel. And sometimes running around from one point to the other can be boring and time-consuming at times. So if you are looking to beat the game quickly, then you should start using Fast travel more. But the ability to Fast Travel isn’t available from the start. You have to unlock it before you can use it. So, this article is going to guide you on how to fast travel from one location to the other in Dying Light 2.

Dying Light 2 is an open-world action-adventure game developed by Techland. This is the second installment of their Dying Light Series. The main elements of the game include parkour movements to get anywhere, with a combination of slides and jumps from one point to another. As the whole city is overrun by Zombies, much like its prequel, you would have to fight and dodge all of those to complete certain objectives and missions.

Like the original Dying Light, this new Dying Light 2 Stay Human game allows all the players to explore the open world. The open world is filled with a lot of elements and thanks to in-game parkour mechanics which works well with the environment. The paraglider which you will unlock in the later missions makes travelling across the map easier and much faster. Despite facing a lot of criticism initially relating to startups and low performance, the game still managed to have over 150K players online at Steam on the launch Day.

It is to keep in mind that Dying Light 2 has a bigger map along with zombies crawling from everywhere. So if you don’t want to engage and only focus on doing the objectives, then use the fast travel.

So, this guide is going to help you understand how to unlock and fast travel from one location to the other in Dying Light 2. 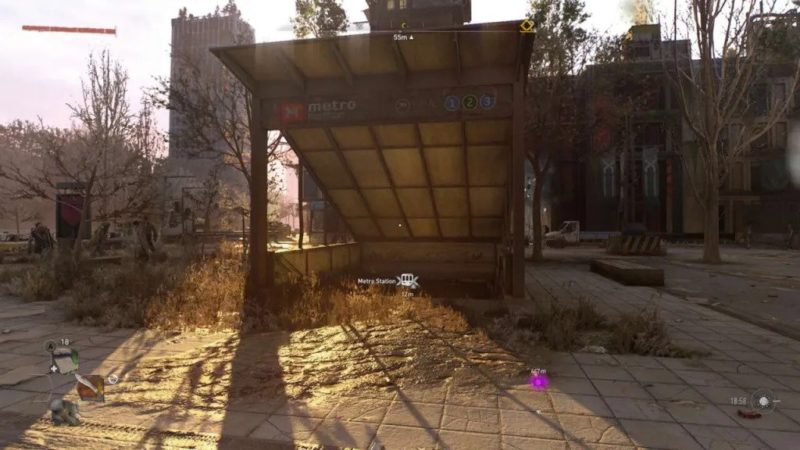 You have to unlock a total of 9 metro stations and the first two stations, Holy Trinity and the Downtown Court, will unlock as soon as you complete the “Lets Waltz” story mission. This will thus allow Aiden to travel between two districts using the fast travel feature. However, these are the steps to unlock the first Fast Travel:

How to unlock the first Fast Travel

The first station that you should unlock is the Hayward Square metro in Downtown Central Loop. The underground station is totally filled with zombies, and you have to clear those out, but the rewards are very promising. It is up to you if you want to clear out all the stations first or unlock them one by one.

But make sure you have good weapons, as it can be quite challenging for you when they will start attacking in large numbers. Since the in-game parkour mechanics is where the game shines, don’t use the Fast travel way too often as you might be loosing out a couple of items and secrets. There are seven more stations which you can choose to unlock, but it can be extremely time-consuming. But it is worthwhile if you want to do so some quick side missions.

So that was all about How to unlock and fast travel from one location to the other in Dying Light 2.

So this was all about Dying Light 2 guide on “How to unlock and fast travel in Dying Light 2”. If you think this guide has helped you, then let us know in the comment section below. Also, for more guides on Dying Light 2, keep an eye on Frondtech! Happy Gaming!