Batman Multiversus – Getting to know the game Multiversus, as you start playing it, soon you’ll realize that among the many characters that are in the game.

You’ll only be given a few for free, as in unlocked and ready to use from the beginning. There’s much more to this, in its open-beta version, the game has a huge variety of characters, including Scooby-Doo, Batman, Superman, Tom & Jerry, and many more! Quite an interesting concept for a game, I’ll confess.

So, to play any character that you do not have from the beginning or one you desire to have, you’ll have to unlock them.

In this article, I’ll cover how you can unlock these characters and what it actually takes precisely to unlock Batman, why Batman you ask? That’s because a lot of players demand to have Batman in the game, so here’s how: 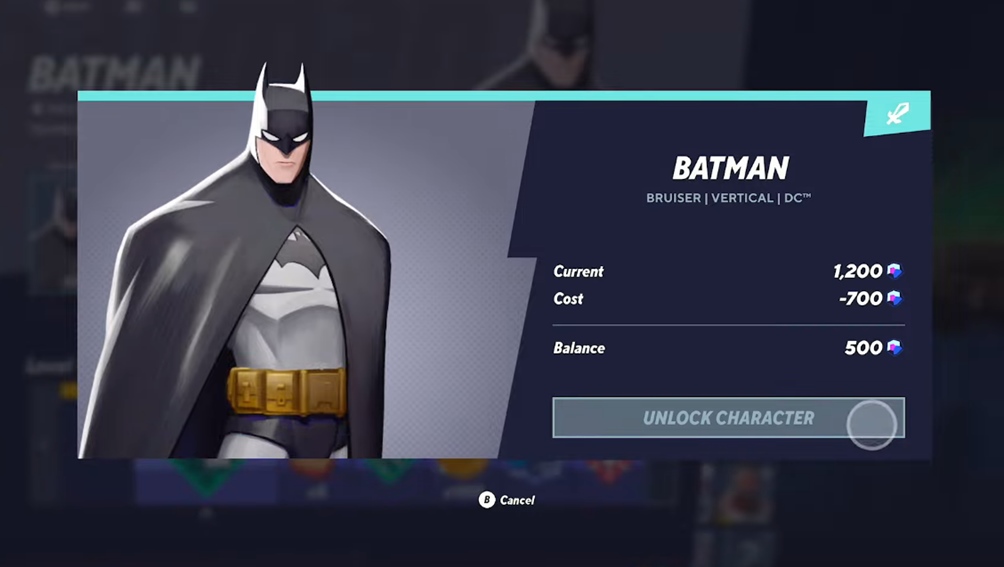 How to unlock Batman in Multiversus

So, Batman isn’t a character you may access right away; instead, you must use Gold, Gleamium, or buy the Founder’s Pack to unlock him.

Usually, 15 to 30 Character Tickets, including Batman, are included in the Founder’s Packs. The catch is that these Founder’s Packs must be bought with actual money; after doing so, you’ll be able to access the majority of the character roster.

In MultiVersus, Gleamium (the in-game currency) is the quickest way to unlock a character. You can either buy the Founder’s Pack or Gleamium separately if that’s how you want to go about it.

Batman costs 700 Gleamium to unlock, therefore if gamers want to do it with Gleamium, it will be a costly deal. Additionally, Gleamium can be used to buy cosmetics.

How to get Batman for free

Although there is another option if you don’t want to spend money to unlock Batman. The character or any other character can be unlocked by earning Gold which is another in-game currency in the free MultiVersus game.

Matches, character leveling, and completing various tutorial assignments are all, ways for players to gain gold. Players receive a lot of gold from each of these actions.

Once completed, missions can net you roughly 2000 gold, while matches can net you up to 100 gold even if you lose. Batman can be unlocked once you have enough gold to do so.

Generally, 1000 to 3000 gold is required to unlock new characters. While purchasing the Founder’s Pack, or Gleamium, and obtaining those characters that way takes less time, gathering this much gold requires patience.

However, the purchasing process is quite pricey, let’s say. The Founder’s Pack is your best option if you don’t have a lot of time to grind through the game but still want all the characters.

If not, you can play the game endlessly to earn gold and unlock Batman.

That’s pretty much it, guys, that was all you need to know about how to unlock Batman in Multiversus.