Die-Vergent Wonderlands – Just like other Borderlands titles, Wonderlands also has a ton of Legendary Weapons and Gear. These Legendaries are, in no way, easy to find. And, if you do not have any idea about where to look for them, your mind ends up wandering the huge open world of Wonderlands, endlessly.

In this article, I am taking a look at the Die-Vergent in Tiny Tina’s Wonderlands. Let’s check out what it is, and where you can farm for it.

Die-Vergent is a Shotgun of the Legendary or Orange Rarity type in Tiny Tina’s Wonderlands. There are several variations of the Die-Vergent present in the Wonderlands game, and the prefix and suffix of this weapon will change depending upon the card that you get. It is a Feriore weapon, and it comes in all the elements. The specialty of this weapon includes an explosion after the thrown weapon bounces and knocks off the enemies.

This shotgun shoots out a giant dice that bounces off on impact. The bullet diverges on impact and bounces off in hexagonal patterns. This is where the name Die-Vergent came from. And once you reload, it is going to chuck out a giant dice that bounces off and explodes after a certain period of time. Also, you have to be extra careful while throwing it because the explosion can inflict self-damage as well. The giant dice that you throw when reloading this weapon can knock any enemy in its path, just like a giant bowling ball. Despite being a shotgun it has great ranged damage as well. Although it is one of those weapons that are good only for crowd controlling but not at all a good choice against bosses. 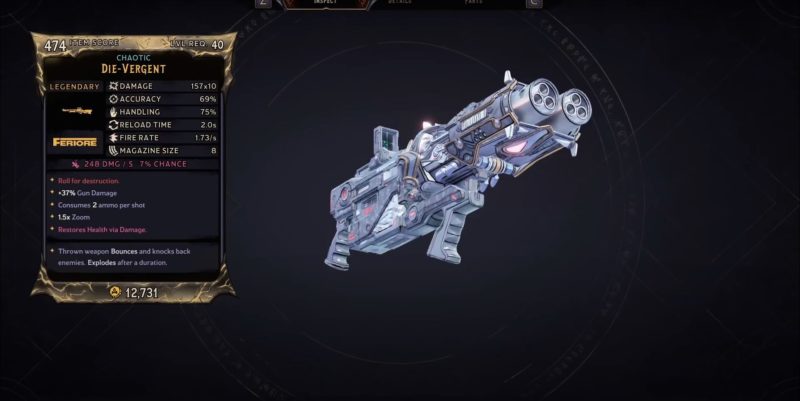 How to get Die-Vergent in Tiny Tina’s Wonderlands

To get or farm the Die-Vergent Shotgun, first, you need to have the all-new Coiled Captors DLC installed. To play the Coiled Captors DLC, you need to have the full Season Pass. If you have already purchased the Chaotic Great Edition during the preorder days of the game, then you already own the Season Pass. If not, then you can easily purchase the full Season Pass or only the Coiled Captors DLC separately from the market. This is not free content for those who own the standard base version of the game. Now, make sure that your game or the Epic Games Launcher is not offline, and that you have downloaded the latest update which is supposedly around 4 GB.

Head over to the Overworld, and you have to find the entrance to the Dreamveil Overlook just near the Green Shrine, on the green grass area. It is the starting area of Overworld which was first introduced to you when you started with this game. The entrance to The Dreamveil Overlook is as marked on the map. To make it easier, the location is just near the huge soda can.

Chums is a Shark type of boss that you will get at the end of the Coiled Captors DLC missions. The boss fight is pretty easy, and you won’t take time taking him down. Interact with the Mystic Mirror you will find in the eerie Dreamveil Overlook.

This boss drops the Die-Vergent Legendary Shotgun. And his attacking pattern is the same as how the shark enemies attack in the game but deals a bit more extra damage and feature new moves in his arsenal. The attack that might take away your ward and health is when he starts chasing you while trying to bite you. The boss also emits an electric pulse-like shockwave which deals damage to your ward directly, if you are nearby Chums. The boss can also try to suck you in if you are standing very close to him.

There are going to be many Seawarg type enemies for you to take down if you need a death-save. Also, try dodging his attacks and moving all the time while shooting at him as this is one of the safest and the fastest ways to take him down. Furthermore, don’t forget to carry a good Fire build along with you for much faster takedowns and forget to increase the loot luck before fighting Chums by finding all the lucky dices in the area to help you get closer to the chances of getting this legendary launcher as a drop from the boss.

2. As a drop from any of the enemies in the DLC

You can get the Die-Vergent Legendary shotgun as a world drop from any of the enemies inside Dreamveil Overlook. Kill every enemy you can find and increase your chances of getting this weapon.

3. By Feeding Crystals to the Chaos Chamber Bunnies

Once you finish the Coiled Captors DLC, all the weapons and the legendary items will be available with the Chaos Chambers bunnies as well. Do Extended Chaos Runs, earn enough crystals, and feed them to the bunnies at the Chaos Chamber, and if you are lucky they should drop the new Die-vergent Legendary Shotgun.

4. Spin the Wheel of Fate

The Wheel of Fate is a new machine for getting loot. Each of the Wheel of Fate spin costs 25 Lost Souls which gives you one of the following pieces of items like Wards, Rings, Armors, Necklaces, Spells and Weapons. The items are random but depends on your loot luck as well. The type of equipment will depend on which icon on the wheel the pointer lands on.  As it is a random drop but before trying completing the Shrine of Aaron G first and collect all the lucky dices in the area for a better chance of getting the Die-Vergent Legendary Shotgun. To collect the lost souls, you will have to open the chests inside Dreamveil Overlook and complete Coiled Captors Dungeon runs.