Horizon Zero Dawn PC crashing at startup or won’t launch fix – The PC release of Horizon Zero Dawn has to be one of the most anticipated events in the world of gaming in 2020. Now that the game has finally launched, PC gamers all over the world are rejoicing.

Performance issue are very common in AAA games these days. Especially in the ones that are ported from console to the PC platform. Death Stranding and Detroit Become Human has their fair share of problems. Same is the case with Horizon Zero Dawn. Some players are reporting that the game is constantly crashing on the forums. While for some the Horizon Zero Dawn won’t even launch. While we wait for the developers to release a patch here are few steps that you can try to fix the issues.

You can also download the driver directly from the link below. Just fill up the details and your driver should be available for download.

Though AMD has not released any driver that specifically supports Horizon Zero Dawn, it is wise to keep your drivers updated. If you are an AMD user then you can find the latest Adrenaline driver from the link given below.

Windows 10 64 bit is mandatory to run this game

The PC version of Horizon Zero Dawn does not support any other OS other than Windows 10, that too the 64-bit version. So if you have a different OS installed then you are out of luck here. Neither this game will run on Windows 7, nor will it run on Windows 8.1 or Linux.

If you have purchased Horizon Zero Dawn on Epic Games Launcher then you can repair the game by verifying the in-game files. Here is how to do it :

Now if you have Horizon Zero Dawn on your Steam account then verify the in-game files of the game to check whether your system is missing any files that might be causing the game to crash or freeze: 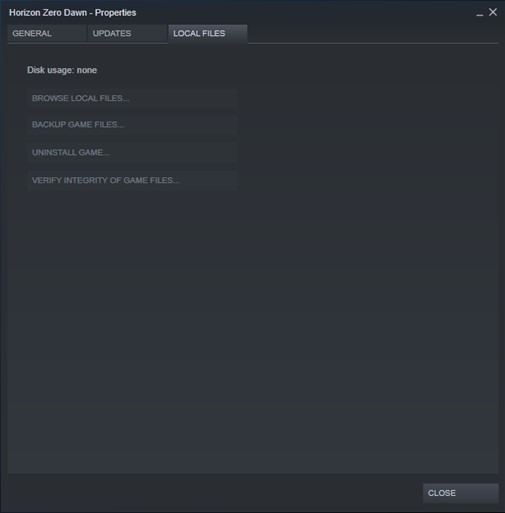 Anti-Virus software hooks very deep into user systems and can affect disk and network operations which can cause crashes in games. Some games also use copy protection technology that can appear as malicious software to an AV scanner, resulting in potential false-positive alerts.

Close any kind of recording or overclocking utility that is running on your PC. Overclocking applications like the RivaTuner or MSI Afterburner, are causing crashes for a lot of games. Sadly, Horizon Zero Dawn is one of them. Even the slightest change in the base memory clock or core clock via an overclocking application is causing the game to crash after few minutes. A lot of games had the same problem. So it is better to stay on the safe side

Wait for the developers to release a patch

Considering how big the launch of Horizon Zero Dawn is on PC is, the developers are constantly on their toes, addressing the issues coming their way immediately. So be patient and wait for a word from the developers. We are pretty sure that they will be releasing a patch to fix the crashing issues pretty soon.

These are all the fixes we have for people for whom Horizon Zero Dawn is crashing and won’t launch.

The DirectX issue could be related to your Windows 10 version. Windows 10 updates cannot be trusted. The recent Windows 10 updates have already caused loads of problems for a lot of AAA titles. The Windows 10 KB4512941 update that was released few months ago gave some serious trouble to gamers all over the world. From high CPU usage to constant stuttering while playing games or running heavy applications, people had to face everything.