Camerupt Location Scarlet Violet – Camerupt is a great Fire Ground Pokemon that looks like a camel that you can add to your Pokedex collection.

So if you wish to add this Pokemon to your collection, this guide will be perfect.

The Camerupt can be found at any time of the day, specifically in the Rocky Biomes. It is a common Pokemon, so finding it won’t be that hard. It can be found in Habitats like the Area Two of the North Province and The Great Crater Lake of Paldea.

You can spot these Camel Pokemon surrounded by Numels as they graze the land. They are aloof from their surroundings and will neither run nor attack when you approach them. Remember that both regular and shiny Camerupt can be found grazing in Scarlet and Violet.

The exact location of the Camerupt is marked in yellow.

Camerupt is a Fire Pokemon of the Ground Type that you will find in Scarlet and Violet. The Camerupt is the second stage of evolution, as it evolves from Numel once it reaches level 33.

It is an eruption Pokemon and falls under the Field Egg Group. It is a camel-type Pokemon with a height of 1.9m and has a catch rate of 150 while having a base friendship of 50.

Not only that, but it also has a Medium Fast EXP Growth range and weighs around 220kgs. Pokemon Brilliant Diamond Shining Pearl was the first game that had Camerupt Pokemon. 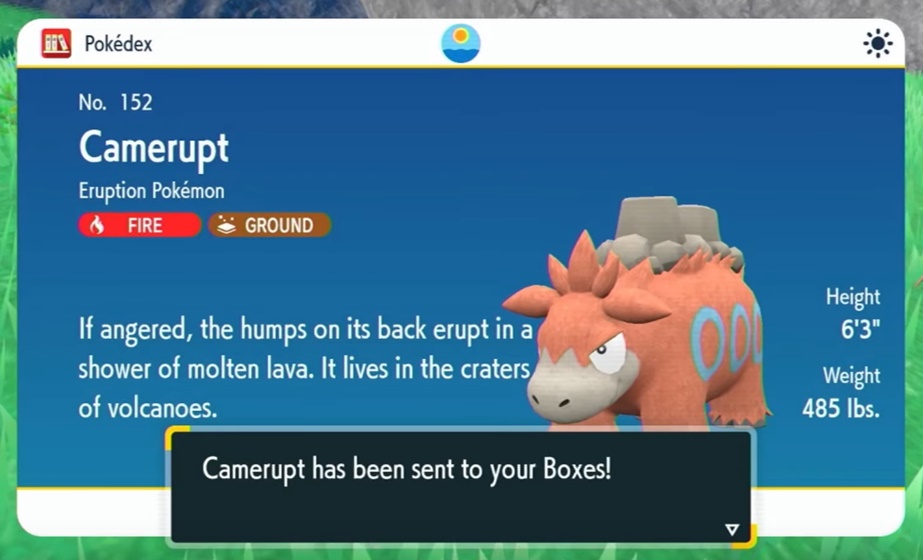 How to defeat Camerupt in Pokemon Scarlet and Violet

Camerupt is a very peace-loving Ground Type Pokemon. But still, if you have one in your Pokedex and wish to take it to battle or if you are facing one, then you should be aware of its abilities, weaknesses, resistances, and immunities.

Here are the Camerupt abilities in Pokemon Scarlet and Violet.

Camerupt is weak against the following Pokemon or Moveset types.

The Camerupt can be damaged by

It is immune to Electric Type Pokemon and Movesets. At the same time, resisting the following types of attacks and pokemon.

So this was all about how to get Camerupt in Pokemon Scarlet and Violet.

Scarlet and Violet is a Pokemon game developed by Gamefreak and published by Nintendo for Nintendo Switch Consoles. The game has got a huge number of positive reviews because of its newer and interesting storylines and new Pokemon for you to catch, train, and battle with.