Austringer God Roll – The launch of Season of the Haunted has been going decent, so far. The release has nowhere near the hype that Witch Queen had generated. But, I guess, there are many destiny 2 players who just want something new to dive into. They don’t really like to analyze the quality of the updates. That doesn’t mean that Season 17 has not received criticisms, though. Many players are particularly mad at the fact, that Bungie took out the Menagerie weapons, just to recycle them and bring them back again as a major ISP of an update.

Personally, I don’t mind the move. Bungie has to make sure that the game doesn’t become stale, and for that, they are forced to completely push updates. And not every update is going to be as godlike as Forsaken or Witch Queen.

Anyway, all the Menagerie weapons are back again in Destiny 2. And with that, my favorite Hand Cannon of all time is also back. Austringer was my baby back in the day. I had farmed 100 different variants of the hand cannon. So when Bungie decided to sunset it. I actually stopped playing Destiny 2 and didn’t return until the launch of Witch Queen. Yes, I was that mad.

Coming to the main topic, the Austringer is probably the best weapon that Season 17 has to offer, and I think everyone should farm for it. It is a 140 RPM Hand Cannon with the Magazine Size of 11. The weapon is an Adaptive Frame and feels just as crisp as the Palindrome. 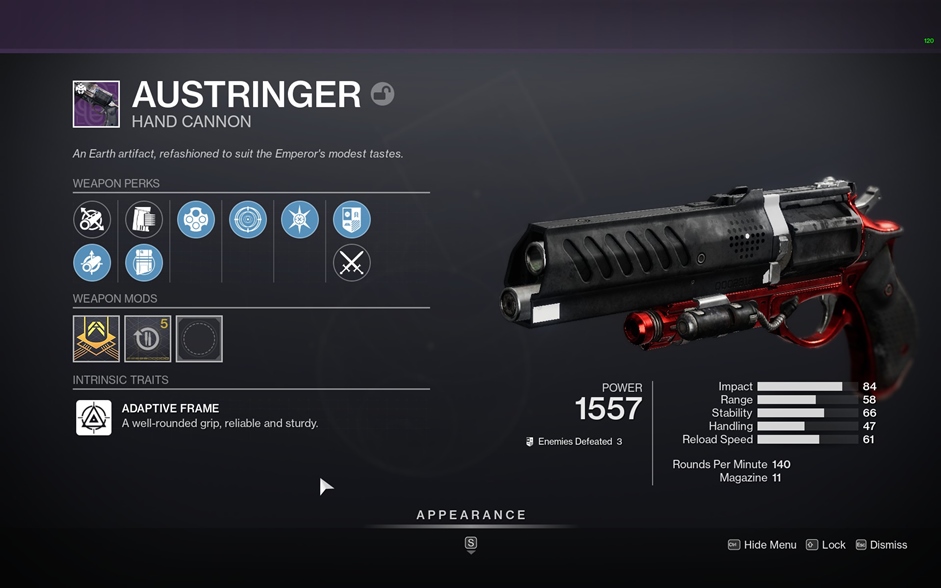 Before you start farming the Austringer, it is mandatory to know about the God Rolls for the weapon. Here they are.

Now, people who would be farming the Austringer, are primarily going to farm for a PvP God Roll. The idea of a God Roll can be different for different people. If you ask me, then a Austringer PvP God Roll should be:

Just wanted to share this. I finally managed to craft a God Roll Austringer with Enhanced Rangefinder and Enhanced Eye of the Storm. Check out this beast:

Again, the idea of a God Roll can be different for different people. If you ask me, then a Austringer PvE God Roll should be:

How to get Austringer in Destiny 2

To get the Austringer in Season 17, you have to unlock the Opulent Weapon Focusing Upgrade on your Crown of Sorrows artifact. Then you can claim as many Austringers as you want if you have enough Umbral Engrams, Opulent Umbral Energy and Legendary Shards.

You can also get Austringer by opening Opulent Chests that are scattered across the Leviathan Derelict. You need Opulent Keys for that, though.