R6 Extraction system requirements – After a whole lot of delays, Ubisoft’s coop tactical first-person shooter, Tom Clancy’s Rainbox Six Extraction, is all set to release on January 20, 2022. The game was revealed during E3 2019, and at that time, it was called Tom Clancy’s Rainbow Six Quarantine, and was set to be released in 2020. But due to the obvious circumstances, the release got delayed. Now, it is finally going to get released.

Ubisoft has revealed the System Requirements of Rainbox Six Extraction. Here they are. 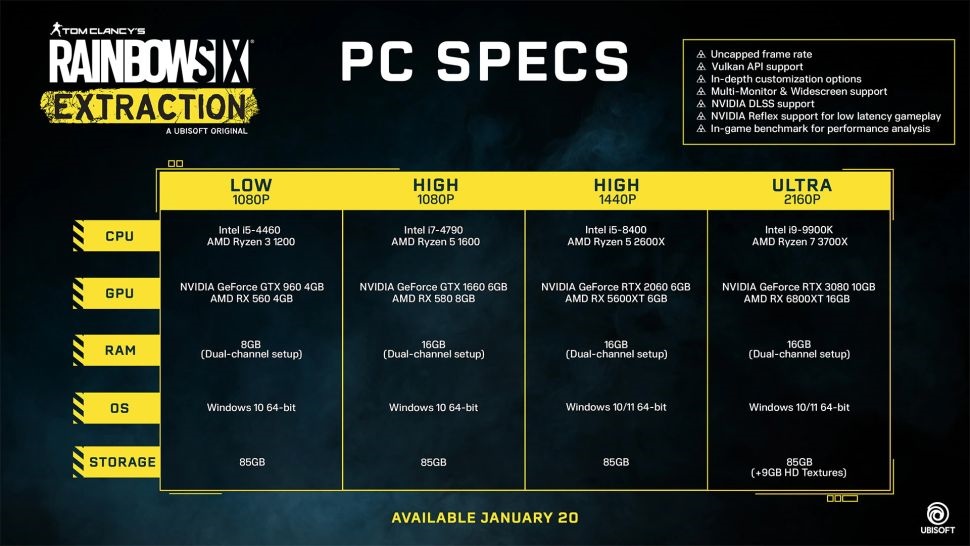 If you ask me, I am really happy with the requirements. I had an idea that Ubisoft wanted to make this game available to a larger player base. If a GTX 1660 can really run this game on 1080p at High settings. Then I can safely assume, that people with GPUs like the GTX 1050ti, RX 470, GTX 1650, etc., would be able to enjoy the game at playable frame rates, on 1080p.

This shows that the developers have taken their time to optimize the game properly. This would allow players with low and medium-end rigs to enjoy the game as well. And, the fact that R6 Extraction, has support for NVDIA DLSS, is really huge.

Check out the Gameplay trailer of Rainbow Six Extraction, while you are at it:

If you think this guide has helped you, then let me know in the comment section below. And for more R6 Extraction guides, keep an eye on Frondtech. We will be covering every single technical issue of the game on the launch day. Good luck!