New World Server Status – Are the servers down – How to check

One of the most anticipated games of 2021, New World is finally here. People can now finally experience what this new MMO and RPG title is all about. Since the Closed Beta launch, New World has been getting a huge number of players, trying the game every day. The game has been getting 150,000-200,000 players playing the game consistently. This is probably the highest that I have seen this year.

But that doesn’t mean New World is in a perfect condition. Since New World is an always-online title, it is quite obvious that some players will experience some connection issues. This is something that is inevitable nowadays. Connection related problems like lag and disconnections are quite common in online games now. But if you ask me, I won’t call this a matter of concern. I mean, this is what betas are for, right? I am really happy that Amazon Games decided to release a beta, as this would help the developers get some actual feedback. Trust me, this is nothing compared to some other horrendous releases that I have seen this year(*cough* Outriders *cough*).

It looks like the New World servers have been going down very often lately, and there is not much that the players have been able to do about it. Since the release of the game, the servers have gone down at various instances. But I won’t blame the developers for that because the servers constantly need maintenance. And server issues are pretty common in MMO games.

Now the question is, how to know whether the New World servers are actually down or is it because of your poor and horrible internet connection(jk XD), that you are not being able to get in the game? Here is how to check the New World server status.

Are the New World servers down?

The good news is, Amazon Games has already launched a website where you can track the server status of New World. It is the best way to know whether the servers are down or up.

All you have to do is:

For example, I play on the Manasic server, that is located at EU Central. Right now, there is a cross beside Manasic. This means I won’t be able to play New World for the time being. 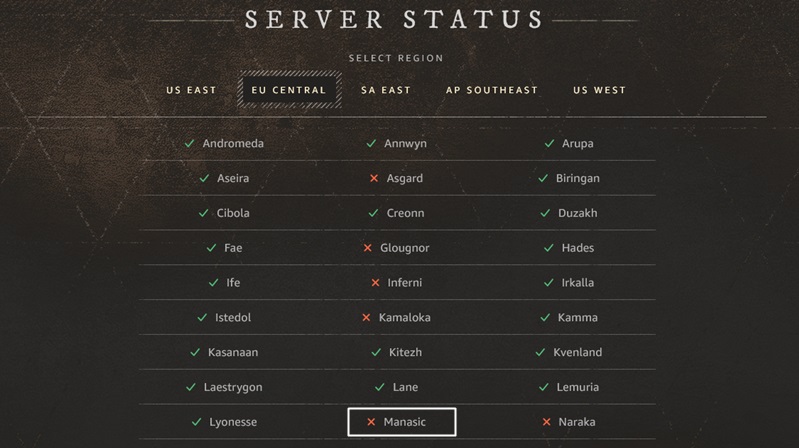 Apart from that, you can also check out the official Twitter page of New World. Where the developers are constantly tweeting about the game. Look for tweets like these:

We will be performing server maintenance for the #PlayNewWorld Beta at 2:00am Pacific Time (11:00am CEST). Downtime is expected to be ~4 hours
You can also check out our Server Status page for availability information. https://t.co/0748XgvrV0

This way, you would be confirming your doubt.

One thing you have to keep in mind that New World came out just a while ago. The game is brand new, so everybody is rushing to play it right now. The servers are at load most of the time. Give it some time, and you will get your share of good experience soon.