New World fps drops and stuttering – This guide contains some simple and basic fixes or solutions for PC users who are facing fps drops, low fps or stutters in New World on PC via Steam.

After a ton of delays, and a couple of successful betas, the launch of the final version of New World is finally here. So far, from what I have seen, New World is undoubtedly one of the most popular games of 2021. The game was averaging between 100,000-150,000 players on Steam, during the beta only. And it wasn’t even an open beta.

I personally played the game a lot during the betas, and came across a ton of bugs and errors, unfortunately. But, I don’t blame the developers at all. Considering how big the scale of this game is, it is almost impossible to ship something like this in a perfect form, completely free from bugs and issues.

I have already covered some of the major bugs and issues in my other New World articles. This time, I am talking about the FPS drops or low framerate issues in New World. There is already a huge batch of posts about the stuttering issue in the game, on the Steam discussions page of New World, and on various forums. Check out this post:

Terrible stuttering
On a 3080 and 10900k with 64GB of RAM, I am getting large FPS drops of like 10-20 for a split second every so often. It appears as stuttering. Someone made a comment it was related to camps or players loading in. Whatever it is it’s unbearable.

Personally, I have tried the game on three systems on time. The first system consisted of Ryzen 5 5600x+RTX 2060, Ryzen 5 5600x+RTX 3070 on the second one, and i3 8100+GTX 1050 ti on the third one. The game ran flawlessly on the first two systems. Yes, the was some high GPU usage and overheating issues. But it was nothing alarming. I did experience quite a lot of stuttering on the third system, though.

What I have done is, I have listed some tested methods that would help troubleshoot the fps drops and stuttering issue in New World. 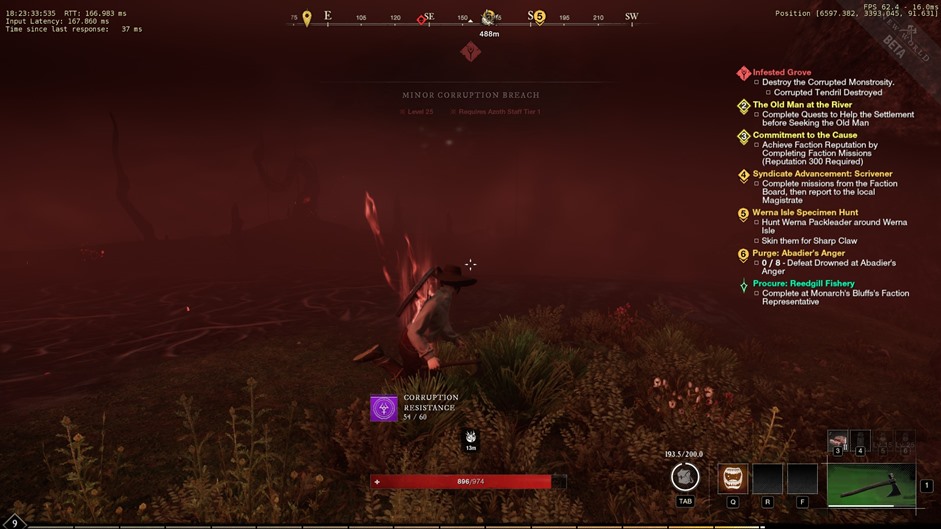 [Note: Most of the methods mentioned on this article, have been recommended by actual New World players only. Who have tried these and then went on to confirm that these work.]

How to fix the FPS Drops and Stutters

Compare the System Requirements of New World with your Hardware Specifications

According to the official system requirements, a gtx 670 2 GB, paired with i5 2400 and 8 GB RAM is enough to run New World at 1080p 30 FPS. To that, I would like to say, it is extremely inaccurate. I am not sure whether the developers tested the game on low-end GPUs or not. But a gtx 670 and 8 GB RAM just won’t work.

I have personally tested this game on my most low-end system, consisting of a GTX 1050 ti, i3 8100, and 8 GB RAM. And I can confirm that New World runs horribly on low-end GPUs. I was hardly getting 30-35 fps at the lowest possible settings. And this was during the closed beta, when not many players had access to the game. And there weren’t 50 players running around on my screen at the same time. The only way to get playable fps on these GPUs, is by lowering the resolution to 900p or 720p.

Nvidia has already released a driver that is optimized for New World. And I don’t see a reason to not install it. The version is 472.12.

AMD, as well, has released a driver that is optimized for New World. It is called Adrenalin 21.9.2 Optional.

I have already written a separate guide on this. The guide is fairly detailed, and should help you get your ‘settings game’ right.

Check out the guide here. 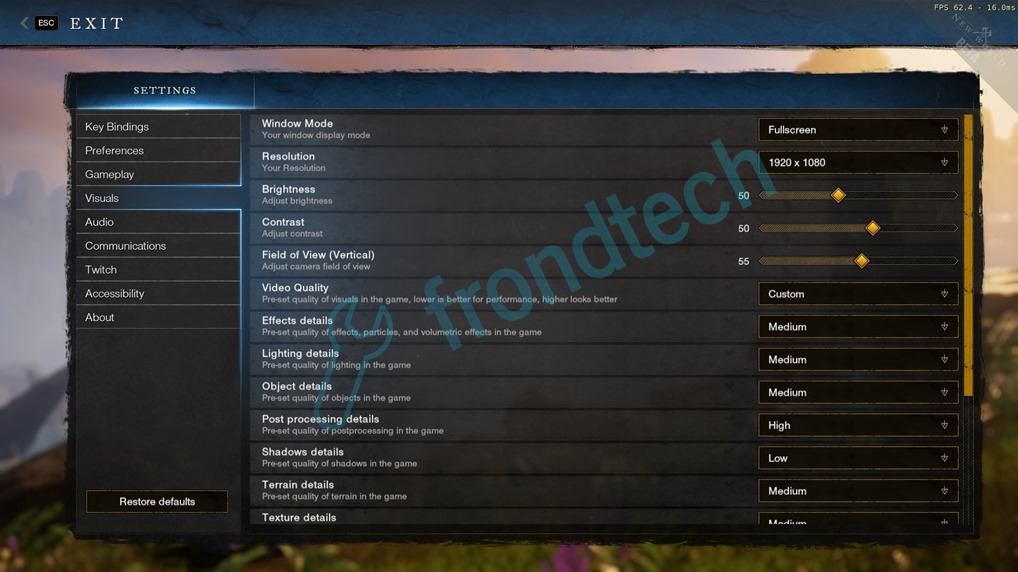 First, go to your Nvidia Control Panel. Click on ‘Adjust image settings with preview‘ located on the left side under 3D settings. Select ‘Use my preference emphasizing‘, and set it to ‘Performance‘. Now try playing New World again and see if you are getting fps drops or stutters or not. If the game ends up running smoothly for you, then you do not need to do anything else.

If New World is still stuttering for, then you need to configure your Nvidia Control Panel Settings manually. Here is what you need to do: 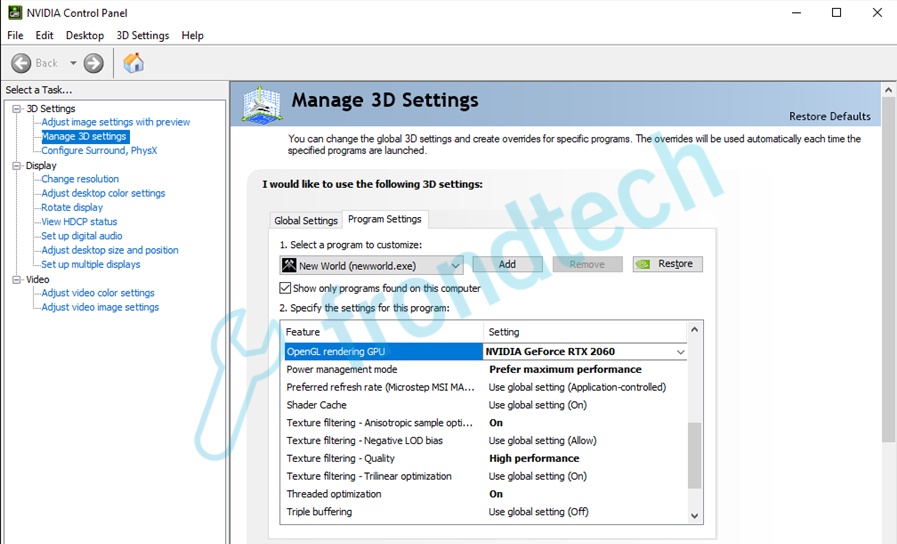 Click on the Gaming tab, then on Global Graphics, and set your Graphics Profile to “Custom”. 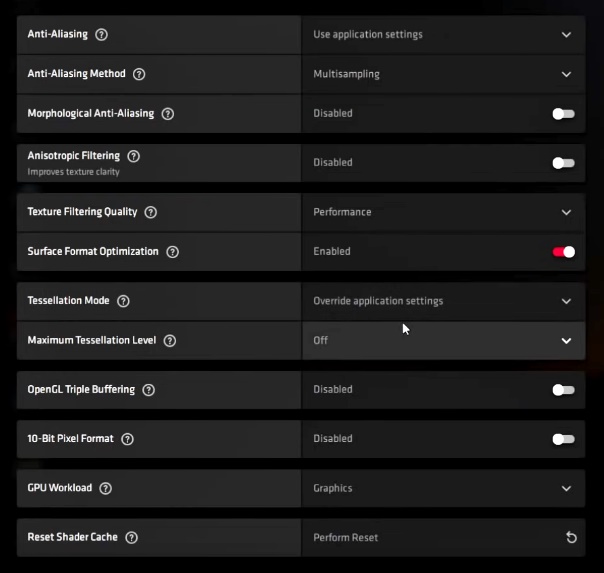 Now reset the Shader Cache by hitting Performance Reset at the bottom of the list.

If you are trying to play New World on a laptop, that has a dedicated Nvidia GPU, then make sure that your laptop is using the dedicated GPU and not the integrated one.

Limit your FPS in New World if you are getting extremely unstable frame rate, and huge fps drops. You can even use V-Sync to solve this problem. There are two ways to limit your fps. You can either do it via the in-game settings menu, or via your GPU Control Panel.

Nvidia in-game overlay has a lot of utilities that eat up a lot of resources. Especially, its Instant Replay feature. Turn if off from GFE. As a matter of fact, turn off every single overlay that you have at the moment.

Windows Background Recording could be a reason. Turn it off by heading over to the “Gaming” settings located inside the Windows Settings menu. There you should find something called “Captures” on the left. Click on it and disable the Background Recording feature inside it.

Make sure that your GPU is not getting throttled

GPU throttling is an issue with New World. I have already talked about this on one of my other New World articles. Go ahead, and give the ‘High GPU usage and CPU usage problems‘ section in this article a read.

If you have heavy applications running in the background, then there is a chance that those stutters in New World are being caused due to some applications eating up a lot of resources. Just open your Task Manager, select the Processes tab and click on CPU. Make sure the arrow beside it is facing downwards.

Doing this will pull the resource hungry applications on top. Look for the processes that are useless, and yet they are consuming a hefty chunk of the CPU. Right click on them and click on “End Task”.

Try these for now and let me know in the comment section below whether your issues got fixed or not. I will be updating this article with more fixes every day.