A “shared open world RPG,” Tower of Fantasy enables you to create a character and pick a server from a number of locations.

Although the two games are quite similar, this is one of the main differences between Tower of fantasy and Genshin Impact, positioning the earlier more in the MMORPG genre than Genshin’s largely solitary RPG experience.

The game Tower of fantasy in the limelight here includes a number of currencies. However, the one in question here is Tanium.

Below, we at frondtech, we’ll cover how you could get your hands on Tanium in Tower of Fantasy. 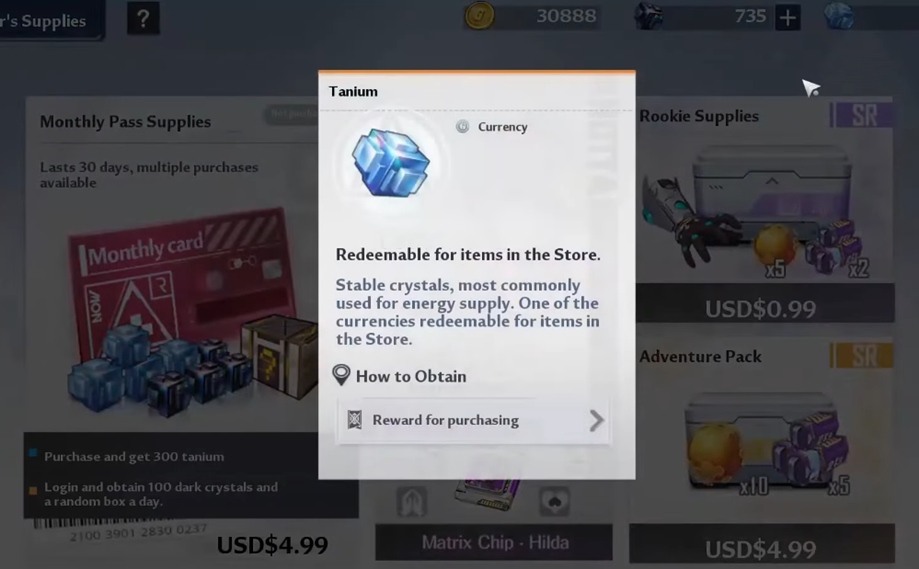 How to get Tanium in Tower of Fantasy

Tower of Fantasy has a distinctive feature that many other games lack, that is the ability to use real-life money to purchase the currency Tanium, which is, as termed, a premium currency.

Tanium is supplied in packages ranging from 1 USD to 100 USD in the game’s shop, where you can also find the Purchase Reward option. When you complete your purchase, you will also receive a special gift of some Dark Crystals if you are comparatively a new player to the game.

This is the only way to get Tanium in the game, that is, you cannot do quests whatsoever to get rewarded Tanium, you could get other currencies, although Tanium isn’t one of them.

Dark Crystals, which can be used to buy practically anything that is available in the game store, can be obtained from spending Tanium. The currency can also be used to purchase other things like Daily Supply Boxes. Not to mention, there are lots of prizes, such as materials, a number of uncommon items, and even Gold and Red Nucleus for summoning.

You also have the Limited Gift Pack menu as an alternate option here. You could find Beta Packs, Red Nucleus Packs, and a special August Gift Package here.

The cost of the gift packets ranges from 120 Tanium, all the way to 3280 Tanium, which is not to mention, the same as the Supply Boxes.

That’s pretty much everything we have regarding Tanium, the premium currency in the game, we’ve covered above the uses for it, and also, how you could get your hands on Tanium in the game itself.

If you think this guide has helped, then let us know in the comment section below. Also, try checking out our other guides on Tower of Fantasy. Who knows, you might find something you have been looking for. 🙂