This guide will show you the best graphics settings for Spider-Man Remastered PC for low-end gaming PCs. You will have a smoother experience in-game, and it might also help you eliminate various performance issues if you are having any, of course.

Spider-Man Remastered is finally available on PC. Who would have thought? A Spider-Man? Making a comeback On PC? This surely is awesome! I mean, this is one of those games for which people actually buy PS4s over Xbox.

You guys have no idea how many people are there who were waiting for all these years for another Spider-Man game to release on PC, after Amazing Spider-Man 2, which was released almost 8 years ago

Speaking of the performance of the game, Spider-Man Remastered on PC is fairly optimized and runs quite well for the most part.

I have tested the game on four different systems, consisting of GPUs ranging from RTX 3070 to GTX 1050 ti. And I didn’t face any sort of game-breaking performance issues while playing the game.

But I can understand that not everyone is sitting with a high-end GPU. That is why I decided to make this graphics settings guide, catered towards the users who are experiencing problems like fps drops and stuttering during fights. Let’s check out the guide now: 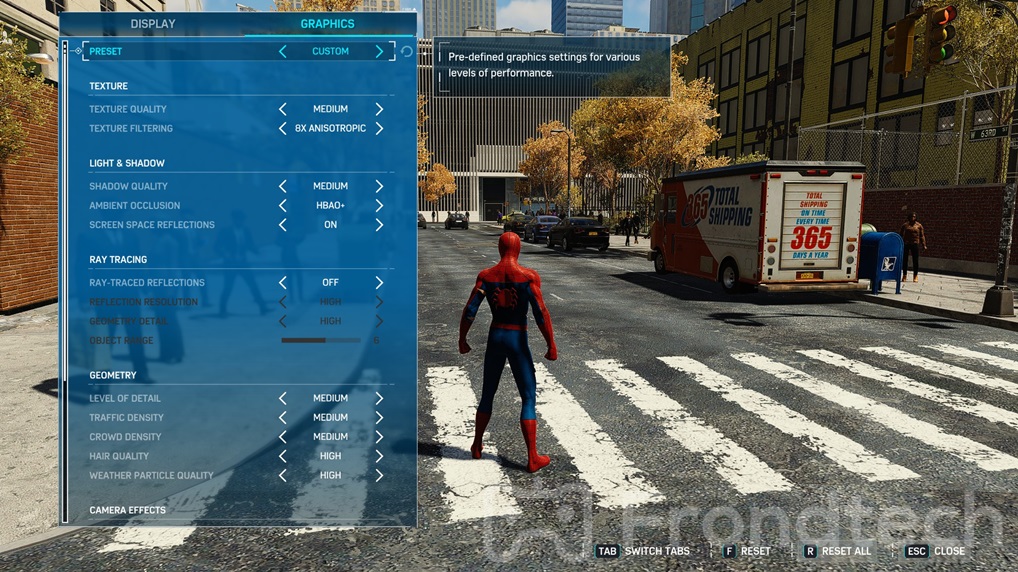 I could have easily decided to set everything to the lowest possible. But, I didn’t want the game to look too bad. The settings given above will give decent performance, without sacrificing too much on the visuals department.

Before moving on to the performance analysis, check out the official system requirements for Spiderman PC once:

I am seeing a lot of articles and videos, where content creators are testing Spider-Man Remastered on RTX 3080s, 3090s, RX 6800 XTs, etc. What is the point? We all know that the game will run flawlessly on those GPUs

First, let’s take a look at how Spider-Man Remastered looks with the settings given above:

Honestly, this looks still looks better than the PS4 version. In fact, I would say that in some places, the PC visuals beat the PS5 version, as well.

The game runs flawlessly on the GTX 1650 Super, with the settings given above. I don’t think there is even a need for me to mention its performance on my other cards, like the RTX 3070 or the 3060 Ti. I even tried the game on my Lenovo Legion 5 Pro, which has a mobile RTX 3060m, and as usual, the game ran flawlessly there too.

Overall, Spider-Man Remastered is really well optimized on PC. And not even a single time, during my six hours of testing, I felt the game was not running well. Trust me, when I say, you can get ‘playable’ fps in this game, even on a GTX 1050 Ti. Yes, there were a few minor hiccups when swinging through new areas. But, that is because of shader caching.

Props to Insomniac Games and Nixxes Software, who managed to make a 4-year-old game meet the standards of 2022 in the Graphics department.

Spider-Man runs really well on PC, and you should not have any problem playing this game on low-end GPUs like the GTX 1050 ti, or the GTX 1650.

If you want, you can actually check out this benchmark video of Spider-Man PC, running on a RTX 3060 ti, paired with a Ryzen 5 5600x. All settings are maxed out:

If you think this guide has helped you, then let us know in the comment section below. And for more Spider-Man Remastered guides, keep an eye on Frondtech. We will be covering every single technical issue of the game on the launch day. Good luck!