Season 18 is going so far so well, in Destiny 2. We just got the first Iron Banner of the season. Overall, the content is still popping. And, in my opinion, one of the biggest reasons for that, is definitely the King’s Fall Raid, and the stuff you can do in it

There are a lot of Triumphs associated with the King’s Fall. Some are easy to obtain, while some aren’t so much. ‘Overwhelming Power‘ is one of them.

So the title you get after completing the ‘King’s Fall’ Seal in Destiny 2 is called Kingslayer. Now in order to obtain it, you must perform Overwhelming Power. How do you do that?

Once you’ve come across Oryx, is when eventually you’ve got to reach the Final stand in one single DPS phase. The only logical way to achieve this is to detonate 16 bombs at once, but as the encounter has recently changed, here are some key things you should probably know: 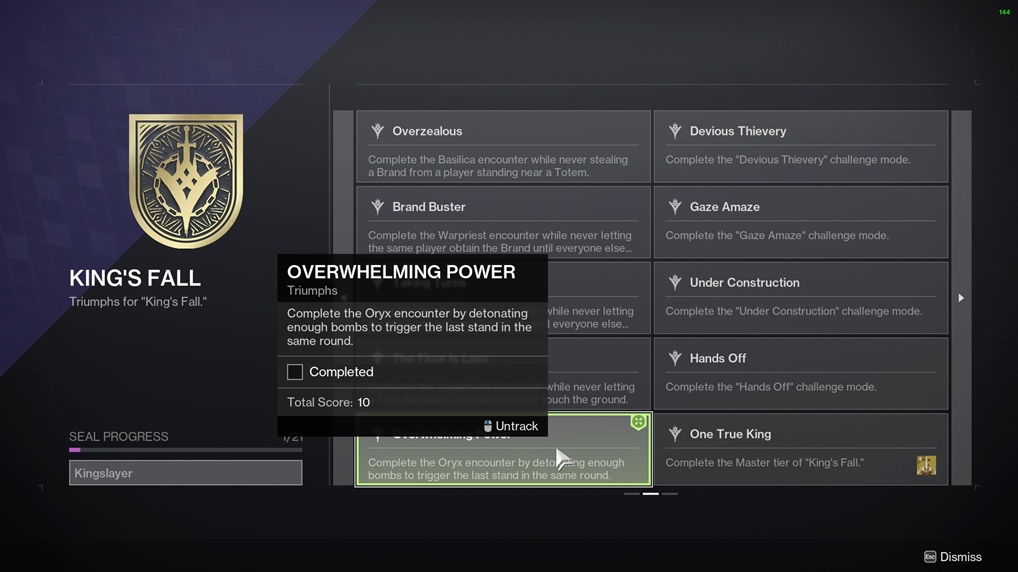 Here’s everything you need to do to complete the Overwhelming Power triumph:

Detonating those bombs in the first place does not do anything or any damage to Oryx. However, it does enhance or extend the DPS window, moreover what’s required is that you detonate one bomb to first prevent the wipe mechanic itself.

To complete it is not a huge task, all you need to do is to play it normally, as you would but with a few changes. You’ll first need to defeat 4 Light Eater Ogres that spawn near the L1, R1, L2, and R2 plates.

Once you’re done with it, just detonate one bomb when you are about to start the DPS phase, which’ll stun him. Now, the upcoming part is important, that you do not damage him in any way hereafter. All you got to do is stun him and stay in the area. You need to do this 3 times in total, this is the first, that means two more.

Now that you’ve done that, in the last stun-phase or the DPS phase, you need to detonate all the remaining bombs. All 13 of them at once near the Oryx.

Following this, you’ll get quite a long damage phase window to make it to the stand in one go itself. If during this time, you run out of ammo by any chance, all you need to do is just scout the area, you’ll find plenty, hopefully.

All of the above is also possible with a lower number of bombs, but to make up for the remaining ones you need to deal a lot of damage and that will probably lead you to run out of ammo a couple of times, at least. So we recommend you do this with the bombs, to save a lot of effort, let’s say.

That’s all we had regarding the Overwhelming Power triumph in King’s Fall, in the game Destiny 2, for more such guides, stay tuned with frondtech. See you all in the next one!