Tiny Tina’s  is a first-person shooter game that features the classic borderlands feel but with a fresh new spin to it. Packed with action and RPG Elements, Wonderlands is a fantasy prequel to the already famous title Borderlands while being a sequel to Tiny Tina’s Assault on Dragon Keep, which was a Borderlands 2 Expansion released back in 2013.

The one thing that will attract Borderlands fans to Wonderlands, is definitely the different classes, and their synergy with each. We have already fully covered the Brr-Zerker class. “Clawbringer” is the topic of discussion here.

As told on our Clawbringer Class Guide, The Clawbringer class in Wonderlands, is a character class that wields a big hammer and is accompanied by a fire breathing dragon called the Wyvern Companion. These warriors are fiery and make use of both flames and thunder to take down their enemies. They are mainly focused on dealing with Elemental damage like Lightning and Fire. The Clawbringers are the “Borderlands’ version of Thor” as you can throw your Spectral Hammer at your enemies which deals lightning damage. This class of warriors are very versatile and can damage enemies both in close and ranged encounters.

You can also utilize the “Clawbringer’s” Skill Tree to upgrade your Lightning and Fire Damage while using your trusty dragon companion, Wyvern. So this article is about everything you need to know about the Clawbringer Skill Tree. 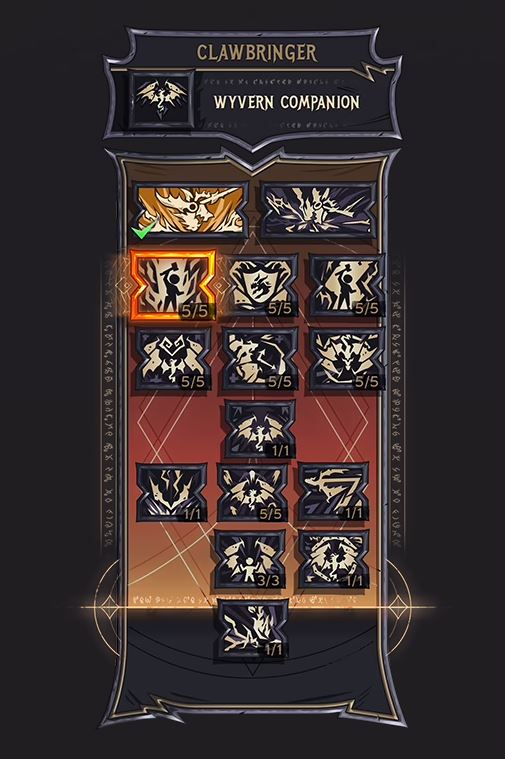 There are 6 different tiers dedicated to the Clawbringer Character Skill Tree. We also included the points needed to unlock that specific skill.

So this was all about the Clawbringer Skill Tree in Tiny Tina’s Wonderlands game.