Packed with action and RPG Elements, Wonderlands is a fantasy prequel to the already famous title Borderlands while being a sequel to Tiny Tina’s Assault on Dragon Keep, which was a Borderlands 2 Expansion released back in 2013. It is a first-person shooter game that features the classic borderlands feel but with a fresh new spin to it.

The world in Wonderlands is open-word and is quite huge. The locations are colorful and are filled with massive, majestic monuments. A couple of new features have made their way to Wonderlands, which will include a character creator, an RPG Styled Skill Tree, and a lot more.

The Clawbringer is a character class that wields a big hammer and is accompanied by a fire breathing dragon called the Wyvern Companion. These warriors are fiery and make use of both flames and thunder to take down their enemies. They are mainly focused on dealing with Elemental damage like Lightning and Fire. The Clawbringers are the “Borderlands’ version of Thor” as you can throw your Spectral Hammer at your enemies which deals lightning damage. This class of warriors are very versatile and can damage enemies both in close and ranged encounters.

So this is a quick character guide for the Clawbringer Class in Tiny Tina’s Wonderlands. 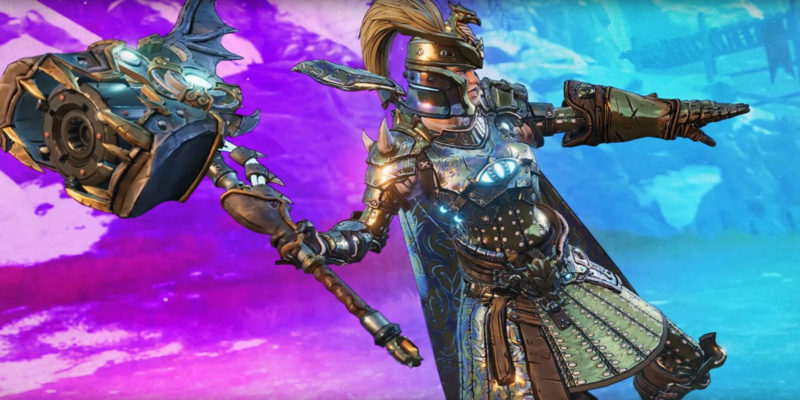 The Clawbringers mainly focuses on dealing with lightning and fire damage. The Dragon Aura move gives an additional Fire damage boost for your whole team. These Clawbringer class of warriors can throw their Spectral Hammers towards enemies while dealing heavy lightning damage.

The Spectral Hammer is also capable of slamming down the enemies on the ground. The Wyvern Companion dragon flies towards the enemies and breathes fire on them while slashing them off with its razor-sharp claws. The damage boosts are also mirrored on to your companion dragon when you increase or modify your damage capability.

Each Fatemaker has its own set of Action Skills, so these two Action skills are exclusive to this class only. You will be able to use it once you select the Clawbringer as your primary class either at the start of the game or when you can choose a secondary class or the Multi-class.

With this skill, you will be summoning your giant spectral hammer and slamming it onto the ground which will not only deal melee damage to the enemies in proximity and will also create a massive Fire Nova which will deal Fire Damage to those enemies.

Storm Dragon’s Judgment attack lets you become “The Thor” as you can throw your giant hammer and deal massive damage upon impact on anything that comes in its path. Once your Hammer hits a surface, it will emit a lightning shock bubble which will deal damage to anyone who goes inside that bubble. Once you recall your hammer back it will again damage anything that comes in its path.

After a certain point of the game, you will get access to Class Feats when you are multiclassing. Multi-Classing is adding the other available classes to your very own character. This gives you access to that certain Class’s Action skills, features and skill trees. This means that you will be a having a total of 4 Action Skills with 2 Class Feats and 2 Skill Trees.

The Clawbringers are very versatile, and they are typically a great class that you should want on your team as it features abilities that directly affects the team mates as well as the Wyvern Companion.

So this was a quick Clawbringer Character Class Guide in Tiny Tina’s Wonderlands game. You can also utilize the Clawbringer’s Skill Tree to upgrade your Lightning and Fire Damage.

We have also sketched a Brr-Zerker Class Guide, as well. Check that out if you want.