Pokemon Scarlet and Violet was released on the 18th of November, 2022, creating a lot of hype among the Pokemon fans.

The Game contains a lot of TMs that you can utilise in-game to teach your Pokemons wide range of moves. This means TMs are specific to the Pokemon-types, like the Flamethrower TM for fire-type Pokemons.

Out of all the Electric moves in Pokemon Scarlet and Violet, one such is the very powerful and iconic Thunderbolt that is always reliable.

It is an ability that is a must for the Electric Powerhouses in the game! But like the other TMs, where is Thunderbolt TM in the game?

For your rescue and to aid those who want to teach this move to their electric Pokemons, here is a guide on where you can find the Thunderbolt TM in Pokemon Scarlet and Violet.

Thunderbolt TM: Where to find it in Pokemon Scarlet and Violet?

You will be required to first head to the Poke Center of Porto Marinada. Reach there and head towards North-East – there should be a cliff. Now, head downwards to an area with the Tera Raid Battle Cave and a Golden Pokeball. This would feature the Thunderbolt TM too.

A few highly aggressive Pokemons of levels 30 to 35 should be here. You can easily fight them off if you have steadily levelled up your own pokemons.

For a better understanding, check out the location, as depicted in the picture below. This is where we found the Thunderbolt TM: 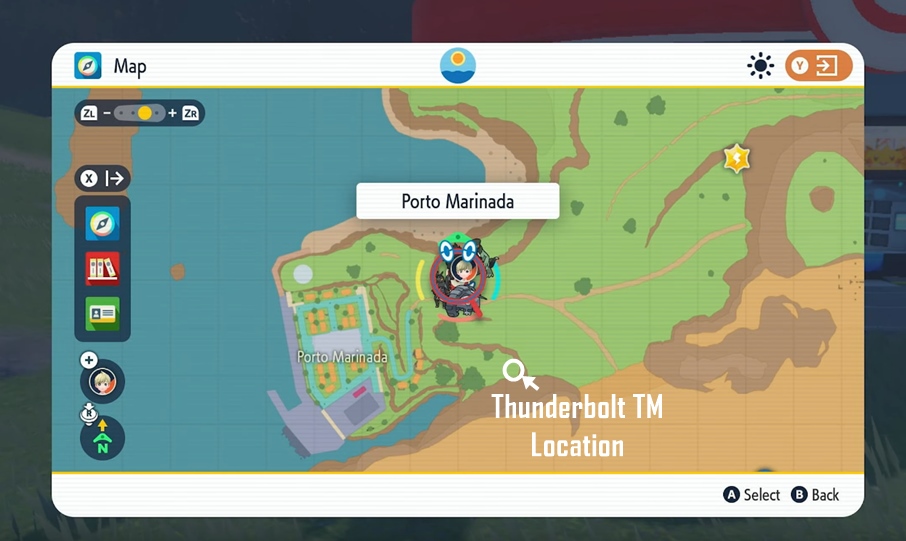 As of now, I don’t know of any other location where you can find a Thunderbolt TM.

How can you make a Thunderbolt TM?

After you have found this move, because it is teachable, you can craft several copies according to your wish. Simply, head to the TM machine and use the below-mentioned items in this particular quantity. To make the Thunderbolt TM use the following:

To make sure that you have the necessary amount of the League Points, do check out our guide on how you can farm them.

That is all that we had on the Location of Thunderbolt TM in Pokemon Scarlet and Violet. For further updates stay tuned with us on Frondtech!