Taipan 4FR God Roll – As there are a lot of weapons in Destiny 2, here’s some info about a hot one. This weapon has made it to some people’s favorites pretty quickly.

The weapon in limelight here is the Taipan-4FR, which is a Legendary Linear Fusion Rifle with a Charge Time of 533 and a Magazine Size of 6.

A Linear Fusion Rifle, be it this one or any other in the game, is a must-have for the guardians, in Season 18. This weapon class excels in every type of activity, atm.

So keeping that in mind, we’ll enlighten you guys with all information we could gather about the weapon, we’ll first explain where you could find it:

Now some stats about the weapon followed by the god rolls: 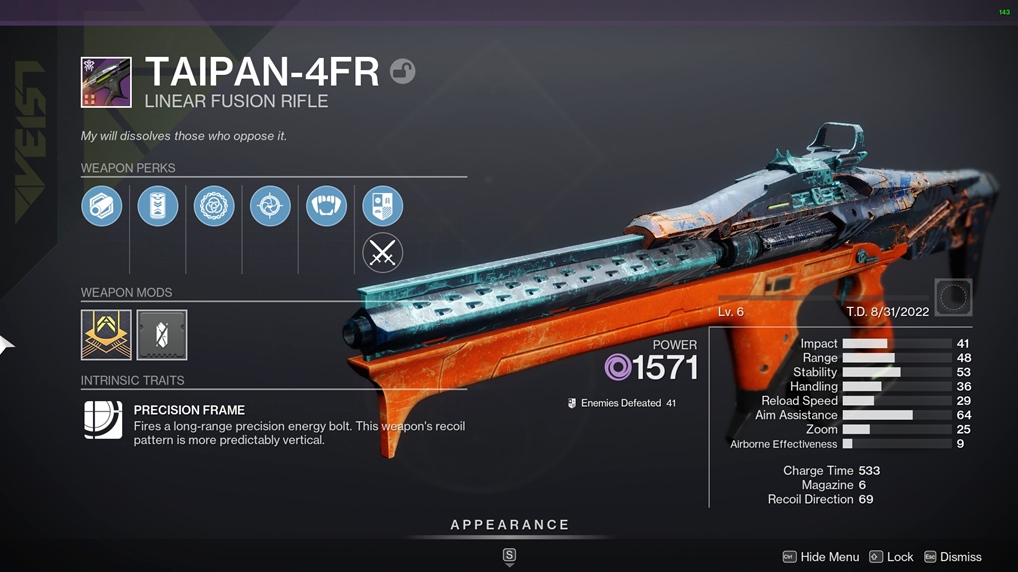 Before you start farming the Taipan, it is mandatory to know about the God Rolls for the weapon.

Let us now look at the perks to determine the best rolls for Taipan-4FR. These are the finest Taipan-4FR perk rolls for Destiny 2 PvE and PvP engagements considering course if you have the patience to farm the weapon.

Now, people who would be farming the Taipan 4fr, are primarily going to farm for a PvE God Roll. The idea of a God Roll can be different for different people. If you ask me, then a Taipan 4fr PvE God Roll should be:

If you ask me, then a Taipan 4fr PvP God Roll should be:

How to get Taipan 4FR in Destiny 2 Season 18

The first and possibly the most straightforward way to find a Taipan 4FR, let’s say, is to craft it at the Mars Enclave, amidst Season 18. You obviously need the Taipan 4FR pattern unlocked for that. If you have done the “Foundry Shaping” quest, that you get from the Relic or the crafter at the Mars Enclave, then you should already have the pattern.

If you need to farm red border Taipan 4FR, then you can follow the method I have shown in this video:

Moreover, if you do not wish to tend to it this way, you’re in for a long walk, as the only other way you could obtain this is to just depend on your luck, that means, looking for loot in the open world, you could come across one of these as a world-drop too.

And that pretty much sums up the guide, that was all we had on the Taipan-4FR, in the game destiny 2, for more such guides stay tuned to Frondtech!