Roaring Moon weakness – At this point, every pokemon scarlet and violet player probably knows that paradox pokemon are superior to normal ones.

Defeating them, or at least attempting to defeat them could prove to be challenging.

Hence, for Pokémon Scarlet players, in this article by Frondtech, we’ll be covering Counters and Weaknesses for/of the Paradox Pokemon Roaring Moon.

Further, we’ve also covered Iron Valiant, which is a paradox pokemon specific to Pokemon Violet, if you’re looking for any insights regarding the same, click here! 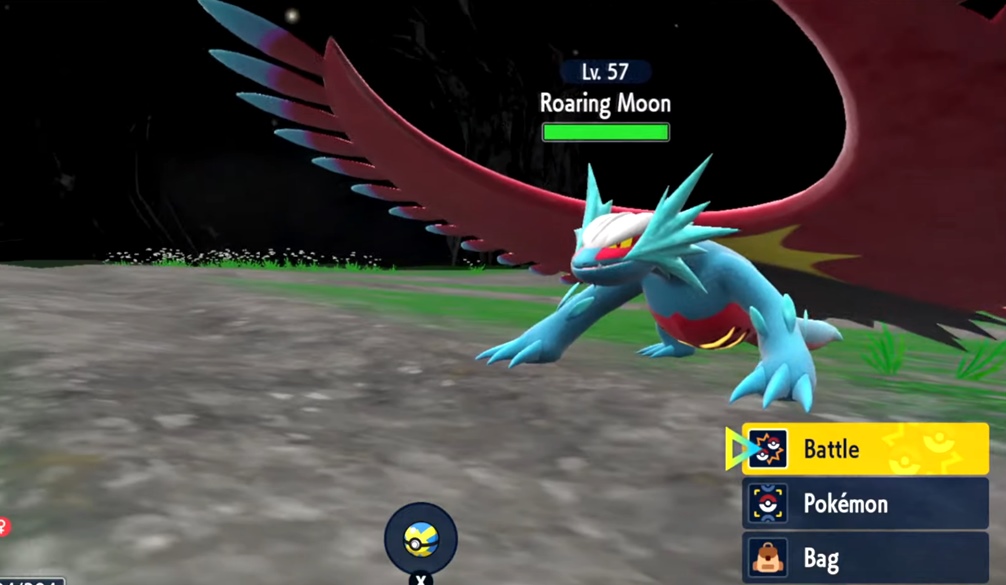 Roaring Moon Weakness and Counters in Scarlet and Violet

Getting into it, this mega-salamence look-alike pokemon possesses some extraordinary stats. Anyone who has participated in Pokemon Scarlet’s final battle, probably knows how difficult it could get to defeat Roaring Moon.

However, this goes without saying that every pokemon in the game has strengths and weaknesses, and with a bit of due diligence, you could make your face-off against the Roaring moon much easier!

Roaring moon has an extremely well attack stat, followed by remarkable speed, this is backed by a let’s call it, mediocre special attack and HP.

These abilities paired together could wipe out entire teams if used properly, the photosynthesis ability could, in fact, be a game changer at places!

The Roaring Moon is a dragon/dark type pokemon, which leaves it vulnerable to pokemon which have the following types:

Roaring moon certainly doesn’t have a lot of options against Fairy-type moves that, for starters, could be used in your favor.

Koraidon, Chien-pao, and Dragapult could be regarded as the best possible counters to Roaring Moon. You might have trouble acquiring these pokemon, so the best options after those would be Mewoscarada or Mimikyu.

Mewoscarada can actually beat Roaring Moon’s speed, while Mimikyu can survive at least one primary attack from Roaring Moon.

Both of these pokemon can also learn Play Rough, which, if paired with decent attack stats, could wipe out a good chunk of Roaring Moon’s health.

That’s everything we had regarding Roaring Moon’s weaknesses and counters.