It has already been a few weeks since the launch of Outriders, and players are finally starting to reach the endgame. Unlike some other Looter-shooter titles, the endgame of Outriders is actually difficult. Expeditions are no joke. Things start to get quite difficult from Challenge Tier 8 or CT8. So you have to make sure that your build is on point.

This guide will show you the best way to farm Trespasser’s Cowl in Outriders.

Outriders – How to farm Trespasser’s Cowl – Delivery On Time Mod

What is Trespasser’s Cowl

Trespasser’s Cowl is a Legendary Helmet or Headgear in Outriders. This Legendary helmet is only available for the Trickster class, and is definitely one of the best Legedaries in the game.

So what is so special about this Headgear? Well, besides being a really sick looking piece of armor, the Trespasser’s Cowl comes with a pre-attached mod called Delivery On Time. 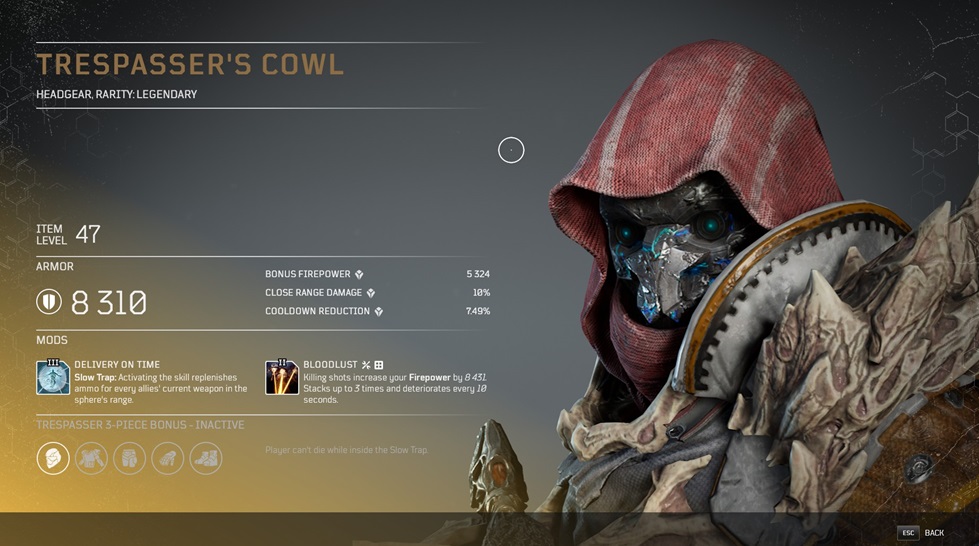 DELIVERY ON TIME
Slow Trap: Activating the skill replenishes ammo for every allies’ current weapon in the sphere’s range.

Just like the Instant Reload mod on Ugake Otarah’s Cowl, this mod is also a blessing for players who are stuck with the Perpetuum Mobile mod. Perpetuum Mobile is an ammo regen mod that goes on weapons. And trust me, there is nothing worse than having to replace a damage mod with an ammo mod on your weapons. My own progress has suffered a lot due to this exact reason.

With the Trespasser’s Cowl, all you have to do is activate your Slow Trap ability, and you and your friends will replenish your entire magazines immediately. This is undoubtedly one of the best armor pieces you can get to complement the Twisted Rounds build on your Trickster. Just replace your Venator’s Knife ability with Slow Trap, and you should be good to go. If you want me to write an article on my “Unlimited Ammo Trickster build” with the Trespasser’s Cowl, just let me know in the comment section below.

Trust me, you could mow down an entire Expedition without being having to reload your weapons even once. If you are having trouble finding the Ugake Otarah’s Cowl, then this definitely the next best thing.

How to farm Trespasser’s Cowl

Unlike Borderlands, the Legendaries in Outriders do not have dedicated drop locations. So you have no choice but to depend on RNG completely. Still, I think there is one method that has a comparatively greater chance of giving you this Legendary helmet than any other method in the game.

I have done 7 runs till now. And let me tell you, if you are specifically looking for an armor piece then this method is way better than doing the low tier Expeditions. At least, you are guaranteed to get something in this case. Each successful run takes around 35 mins. I am using an M.2 SSD, so I’m guessing that helps in my case. If you are using a normal HDD then the whole process might take a bit longer. But it is still worth it.

Now, if you do not want to do repeated runs and waste a lot of time on the farming. Then here is a nice trick that you can try(obviously at your own risk). Here is an awesome video by YouTuber LaserBolt on how to farm Legendaries from the Hunter Mission more efficiently:

The whole process might take some time, but it is definitely worth it. Also, this method might get patched in the future. So utilize it as much as you can before it goes away.