Naraka Bladepoint fps drops stuttering lag – Naraka Bladepoint is a completely different take on the Battle Royale genre. It is quite different from the other popular BRs that are out there. I am talking about titles like Apex Legends, Fortnite, COD, etcetera. The approach that 24 Entertainment(developer studio of Naraka) has taken, is kind of similar to another BR title I know, Spellbreak. If you didn’t know, Spellbreak was all about abilities, and Naraka is all about melee-based combat. The game promotes less focus on ranged combat. Yes, they are present, but they aren’t as powerful as the melee weapons.

Naraka Bladepoint is a Battle Royale where up to 60 players can take part in a single match. Instead of straight-up weapons, Bladepoint offers players insane mobility powered by parkour and grappling hook, a vast arsenal of melee and ranged weapons and a roster of characters with powerful abilities. The game is doing quite well so far on PC, with over 50,000 players constantly playing the game. Though the numbers are a bit low, considering that it is a Battle Royale title. I would say, it is too early to comment on how things would turn up for Naraka Bladepoint in the future.

Now that we are done discussing what the concept of the game is, let’s talk about the issues that it has. A lot of players, who have bought Naraka Bladepoint on PC via Steam, are facing a handful of errors and performance issues in the game. I have already covered some technical errors, it is time to address the performance issues now.

This optimization guide will show you how to troubleshoot performance issues like fps drops, stuttering, and connection lag. 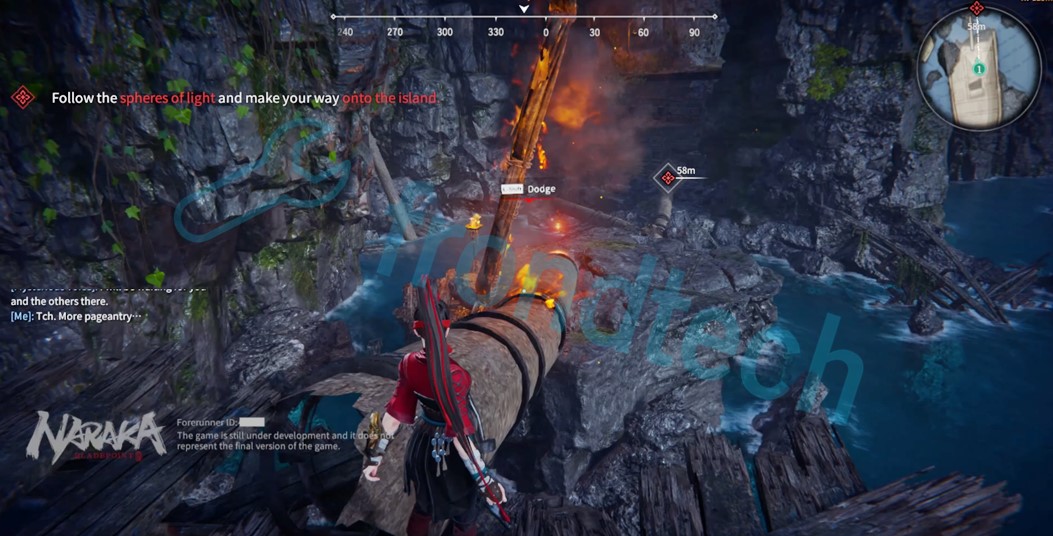 How to fix FPS Drops, Stuttering and Lag in Naraka Bladepoint

If you take a look at the official system requirements of Naraka Bladepoint, it is quite obvious that this isn’t a less-demanding title.

Yes, you can run the game on a GTX 750 ti. But that is not enough to get you past 720p/60fps. Now, this would not have been an issue if this was a single player or a PvE title. But it isn’t, it is a Battle Royale. Which is undoubtedly one of the most competitive genres out there. In BR games, fps is everything. You would probably be playing against players who are sitting with RTX 3070s, playing the game on 240hz monitors. And nowadays, just having skills is not enough. You have to “git gud”, and “git a gud PC” as well(XD). So if you do not have a decent system, you might have to live with the performance issues.

If you have a decent GPU, but you are still getting fps drops and random freezes, you might have to tweak the graphics settings to squeeze out some extra performance. I have tested the game on a GTX 1650 and Ryzen 5 5600x, and the settings you would be checking out below would help you get close to 110-120 fps(just in case you have a 144hz monitor). 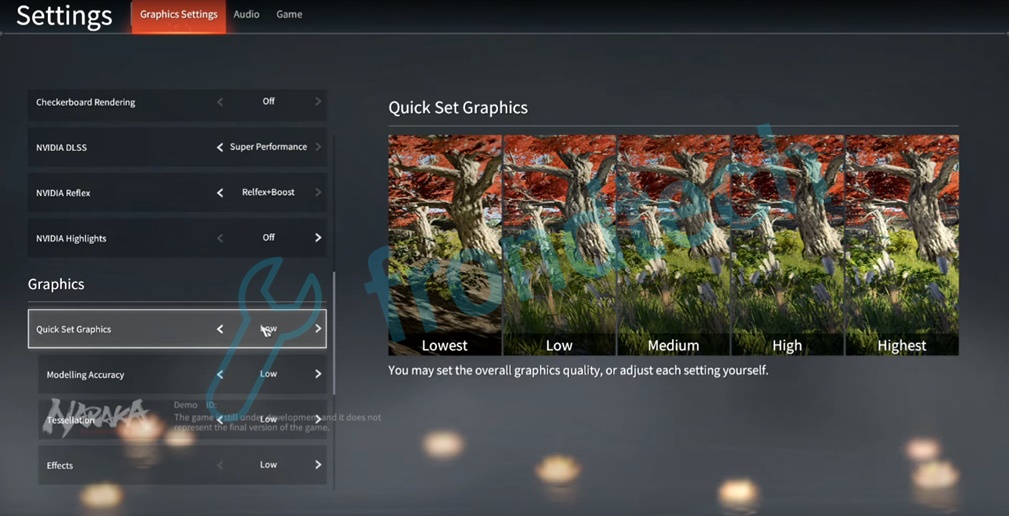 Nvidia has already released a driver that is specifically optimized for Naraka Bladepoint. The version is 471.68. Install the driver to eliminate any sort of driver-related issues. You can either download it via GeForce Experience, or you can visit this link to download the driver manually. 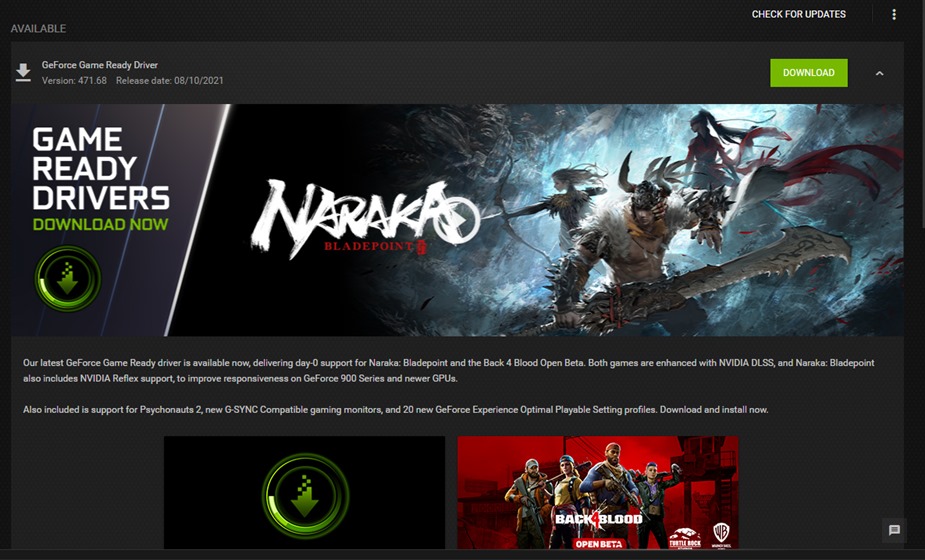 AMD has not released any driver that is specifically optimized for Naraka Bladepoint. I checked the release notes of their latest driver, which is Adrenalin 21.8.1 Optional. I didn’t see anything about Naraka there. Still, if you want to update your driver just for the sake of it, you can do that from here.

Move the game to your SSD

Now, I knew, from the official system requirements, that the devs have recommended the use of SSD for Naraka Bladepoint. I didn’t pay much heed to it initially. Then I came by this post from a Steam user:

I installed the game on SSD. Heres the noticeable different

– Main menu now doesn’t load in like a broken game where game start to render each part of character.
– Smoother spawning in the waiting area.
– Smoother experience and no massive fps drop when spawning in the arena.
– Considerable reduction in fps drop. (No longer experiencing random drop that turn game into a slideshow)
– No longer latency spike to 500ms (for some reason)

Save to say this game is horrible optimized for HDD. If you have a SSD consider moving the game file if you want a playable experience. (This problem might be fix during launch)

I went ahead, uninstalled the game from my HDD and re-installed it on my SSD. And the difference in performance, that I noticed, was actually drastic. Normally, I don’t recommend installing games on SSDs on my articles, because I know that a lot of low-end users still use HDDs. And I regularly play games that are installed on my SSD, and my HDD as well. Honestly, I have not gotten better in-game performance in any game by just switching my storage device. Yes, the load times were faster. But after the loading is complete, the performance more or less stays the same. Naraka Bladepoint is probably the first game that I have ever seen, benefit so much from an SSD. So if you have an SSD, use it, please.

If you do not have a powerful processor, then I would suggest that you turn off features like Nvidia Instant Replay or the Windows Background Recording. These both do the same job and might cause unnecessary stuttering in demanding titles.

To turn off Nvidia Instant Replay:

To turn off Background Recording:

If your laptop features an Nvidia graphics card inside, then you need to make sure your laptop is using that instead of the low-powered integrated one.

If you have got heavy applications or utilities running within the background, then there’s a possibility that the lag is the result of some applications feeding up on loads of resources. Here is what you need to do:

If you have a lot of useless files piled up inside the “Temp” folder of your system, there is a chance that it might be making your PC slow and less responsive. Especially if you are using a normal HDD instead of an SSD. So removing them is the best thing to do.

To do that, just press the Windows+R keys at the same time. Type %TEMP% inside the box and press Enter. Select all the files inside the temp folder by pressing Ctrl+A and, just press the Shift+Delete keys on your keyboard. There might be some files you might not be able to delete. Skip them instead.

Try these for now, and let me know, in the comment section below, if any of the fixes mentioned above has worked for you or not. I will be updating the article with new ones in the future.

If you think this guide has helped you, then let us know in the comment section below. And for more Naraka Bladepoint guides, keep an eye on Frondtech. Good luck!