Gammoth Monster Hunter Stories 2 – Wondering where to find Gammoth in MH Stories 2? Don’t worry, we got you.

Where to find Gammoth is Monster Hunter Stories: Wings of Ruin 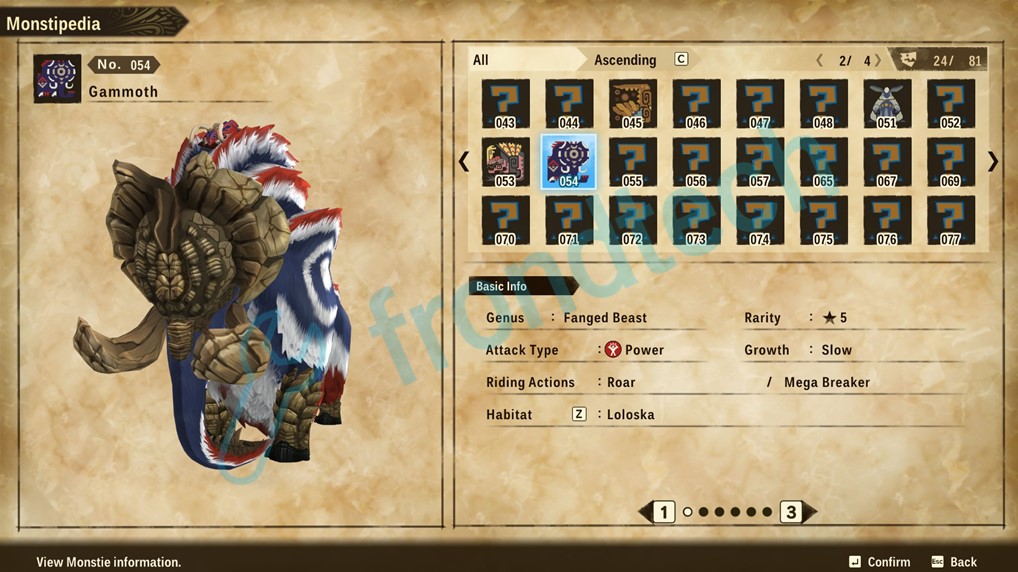 Gammoth is a Royal Monster in Monster Hunter Stories 2: Wings of Ruin. It has a Rarity of 5, and is definitely one of the best Monsters you can find for your party early game. Gammoth is the third Royal that you come across in the game. The first two being Tigrex and Monoblos. And let me tell you, the stats on this Monster is insane. It excels in every step, early-mid game. It has insane amount of HP, really high Attack, and really great Defense stats. I mean, if you go and check the Monsterpedia. It shows that the Max HP on Tigrex is 6800, and on Monoblos, it is 6000. Gammoth has a Max HP of 19780!

Its Riding Actions, Roar and Mega Breaker, are quite useful. They come in handy in a lot of situations. Roar is really useful in locations, where there are too many monsters roaming around. Use Roar, if you just want to walk past a group of monsters without engaging in a battle. Regarding Mega Breaker, I was finally able to remove my Blue Yian Kut-Ku from the party. I was using it for Rock Breaker. But now that I have Mega Breaker on Gammoth, I don’t need it anymore. Overall, I would highly recommend that you get Gammoth in your party. If you somehow manage to catch it during the mid-portion of the game, you wouldn’t have to worry about getting knocked anymore.

You can find Gammoth at Woodland – Loloska Region. This is where you come across a Gammoth for the first time. The good thing is, you don’t have to specifically look for this location. Just do the ‘Provisions in the Forest – Investigate Loloska Forest’ quest, and you should discover Woodland. The best part is, there is a Catavan Stand right beside the location of Gammoth. So if you are planning to farm the Royal Monster, a couple of times. You can do that with minimal travelling. Here is the exact location of Gammoth on Woodland: 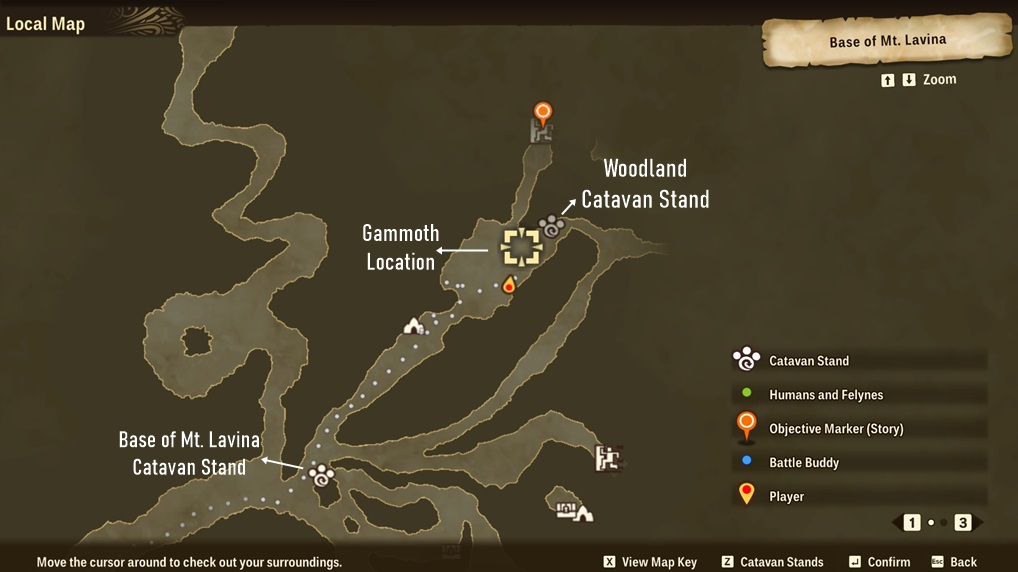 Now, when I said, “If you somehow manage to catch it”, earlier, I was actually being serious. Locating Gammoth is the easy part. Beating it is the difficult one. Extremely difficult one.

None of the monsters you have come across, till now, even compare to the level of Gammoth. There is a high chance that you won’t able to beat it this early. Your best bet is to continue doing other stuff until your level is high enough to match Gammoth. It doesn’t matter even if you have Monsties like Tigrex, Monoblos or Anjanath in your party. You would lose 9 out of 10 times. And there is a reason for that.

I don’t know how you are going to beat it. Here is what I did to beat Gammoth. When I fought Gammoth for the first time, I got knocked out in just 2-3 turns. I was at level 25 at that time, and it didn’t take me long enough to realize that my level is not high enough. So, I went on to doing some serious grind, and increased the level of my party to 31. How I did it? Well, I just kept on replaying the Loloska Elite Trial Quest from the Quest Board of Kuan Village. It took me some time, but it was way faster than fighting monsters in the wild. I was also using the Training Charm at the Prayer Pot to get some extra exp.

After levelling my whole party to level 31, I decided to give my fight with Gammoth another try. I was still getting knocked, though, until I discovered few stuff. The reason you are going to get knocked 9 out of 10 times is not because of you or your Monstie. It is because of Avinia and Frostfang in your party.

You see, the only way of beating Gammoth, when you are at the mid-portion of the game, is by constantly doing Double Attacks and winning your Head-to-Head battles. And you can actually do that by going for Speed Attacks only. The Gammoth only uses Power attacks. So all you have to do is get your Tigrex and keep doing Speed attacks. Just remember the RGB rule or the Red beats Green beats Blue rule. The problem is, you have no control over the attacks of Avinia and Frostfang. They will randomly go for Technical or Power attacks, take insane damage, and would lose their 3 hearts in no time, causing you to lose the entire battle. So I went on doing the story missions again, and came back solo for the fight after Avinia was out of my party. It would be better if you could get the armor and weapons shown on the screenshot below: 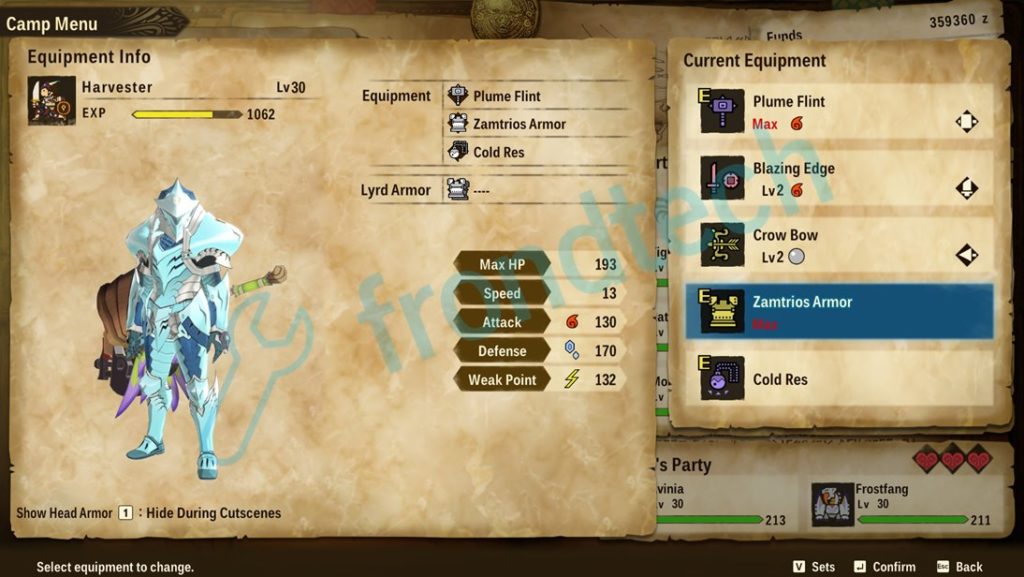 I didn’t record my fight, but here is a really awesome video from Youtuber Akantorex, where he is showing his solo battle with the Gammoth:

Now, to get or catch a Gammoth, you need to make it Retreat. You won’t be able to catch it if you eliminate it completely.

Get some good ol’ Paintballs in your inventory. Paintball increases monster Retreat chance for 3 turns, and it is most potent on low HP monsters. One Paintball costs 200 Zenny. Bring the health bar of Gammoth down to 10-15% and throw a Paintball. Try to beat it within the next 3 turns. If everything goes according to the plan, the Gammoth should Retreat. Once it Retreats, a Monster Den should pop up nearby, marked with a green-colored Den icon on the Map. Enter the Den, look for the Nest of Gammoth, pick up the Egg and leave the Den. Now, just visit the Stables and hatch the egg. Congratulations! You now own a Gammoth! You can finally break the bigger rocks.