It is not just that new pokemons have been added to Pokemon Scarlet and Violet. Even the familiar ones have been given a few new traits. These games, in a very unfamiliar way, give the introduction of the paradox Pokémon that basically boasts about the very well-known designs by all. Delibird has the same in the form of Iron Bundle in Pokemon Scarlet and Violet. Different from the present-day counter of Iron Bundle, this pokemon is surprisingly powerful too, with high stats and various special attacks. You might face more than just one or two of such pokemons, so knowing their weaknesses is a must for you. Here is a guide to help you with that. 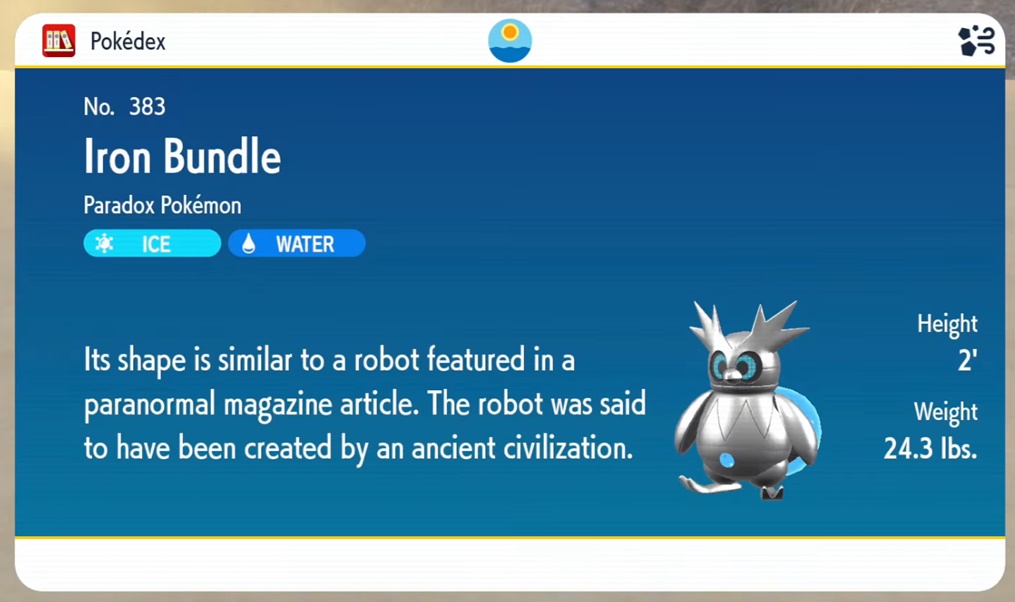 Being an Ice/Water type, Iron Bundle is weak to the following kinds of moves:

It has great Special Attack, Speed, and Defense, but lacks in Special Defense and HP. Despite all of this, it shares one feature with Delibird, that is, it can learn the Flying-type moves, giving it kind of coverage against the grass and flying types. Due to its water typing, it also takes out a lot of the rock types. And owing to its abilities added with speed, most electric Pokémon are also out of the question. Hence, there are only a handful of things that can be used against Iron Bundle to defeat it safely.

The best chance that you have against Iron Bundle is using an Electric Pokemon that has high HP and Special stats. Out of all the pokemons that are available in Gen IX, your safest and best bet would be to use Bellibolt to defeat Iron Bundle.

It has great bulk along with excellent electric moves like Thunderbolt and Discharge. Adding onto this, its ability of Electromorphosis will help, with every hit, to charge up its electric moves. If your Bellibolt manages to somehow take one hit, then it will most likely take down Iron Bundle in its next attack.

However, if you want to completely avoid any damage whatsoever, then a great option could be Miraidon. Even though it has electric and ice typing, Iron Bundle would face great difficulty in defeating this legendary Pokémon Miraidon.

That is all there is to know about Iron Bundle weakness in Pokemon Scarlet and Violet. Stay tuned for further updates!