Icarus stuttering fps drops – This Optimization guide will show you how to take care of the stuttering and fps drops in Icarus. A lot of users are facing these problems. So don’t worry, you are not alone.

After several delays, the ‘big survival game’ of 2021, has finally been released. Icarus is a session-based PvE survival game for up to eight co-op players or solo. Let’s take a look at the official description about the game:

Confront and conquer a brutal PvE world determined to wear you down or tear you apart. From toxic atmosphere to savage wildlife and game-altering weather events, Icarus is a planet with a temper. Preparation and planning are everything. Whether it’s to find a source of oxygen, stalk your next meal or stock supplies for a long journey into the wilderness.

Master two separate tech trees: planet-side and orbital. Use the planet’s resources to craft handmade tools, buildings and machinery to protect yourself and aid your mission. Then return to orbit with your prize – rare exotic materials that you can engineer into advanced tech. As you progress, choose which tech to take on your next drop so you can travel further, gather faster, automate production or survive longer.

Your time on Icarus is limited, so use every second wisely. The orbital space station waits for no one. If you fail to return to your dropship in time, there is no rescue – your character’s progression and tech is lost to planet Icarus. Drop sessions can vary from hours to days long with varied missions and locations. Every drop has a clear goal and time limit, but how you overcome its challenges is up to you.

All those sound great, right? Unfortunately, not everything in Icarus, is in the ideal condition. The game is stacked with issues at the moment. Performance issues, to be more specific. PC players are experiencing stutters, fps drops and random freezing, left and right. And, without a patch from RocketWerkz, these things could not be fixed permanently.

This guide is a collection of basic fixes and workarounds, that would help you make the situation is a tad bit better.

How to fix Stuttering and FPS Drops in Icarus

Before we start, let me clear one thing. Icarus is one of the most demanding games that have released till date. I don’t know how much of it is true, but that game recommends a whopping 32 GB of RAM! Yes, you saw it right. Even the minimum requirements list recommends a GTX 1060 6 GB, Intel i5 8400, and 16 GB RAM. Those are incredibly high specs, if you ask me. Why don’t you check out the official system requirements by yourself:

So, if you are playing this game on a low-end GPU, like the GTX 1050 Ti. Then I am sorry to say, but you won’t be able to get rid of the stuttering completely. It is best to just go for a refund.

Here are some optimization tips recommended by the devs of Icarus, that may help you eliminate the stuttering and fps drops in Icarus:

NVIDIA DLSS and FSR acceleration technologies are enabled in both settings.

These tips are suggestions, they will have different results on different graphics cards.

Nvidia has already released a Game Ready Driver, specifically optimized for Icarus. I have personally tested the driver on all of my system. And I can confirm, that it has no issues. I cannot necessarily guarantee, that you will get performance boost after installing the driver, for sure. But since, it has been recommended by the devs. It is best to follow their instructions.

You can download it from this link or directly via GeForce Experience. Here are the release notes:

AMD has also released a driver optimized for Icarus. The version is called Adrenalin 21.12.1 Optional. You can download it from this link, or via AMD Auto-Detect. Just visit the link, fill-in the details, and download the driver. Restart your PC once it is done.

3. Play the DirectX 11 version of Icarus 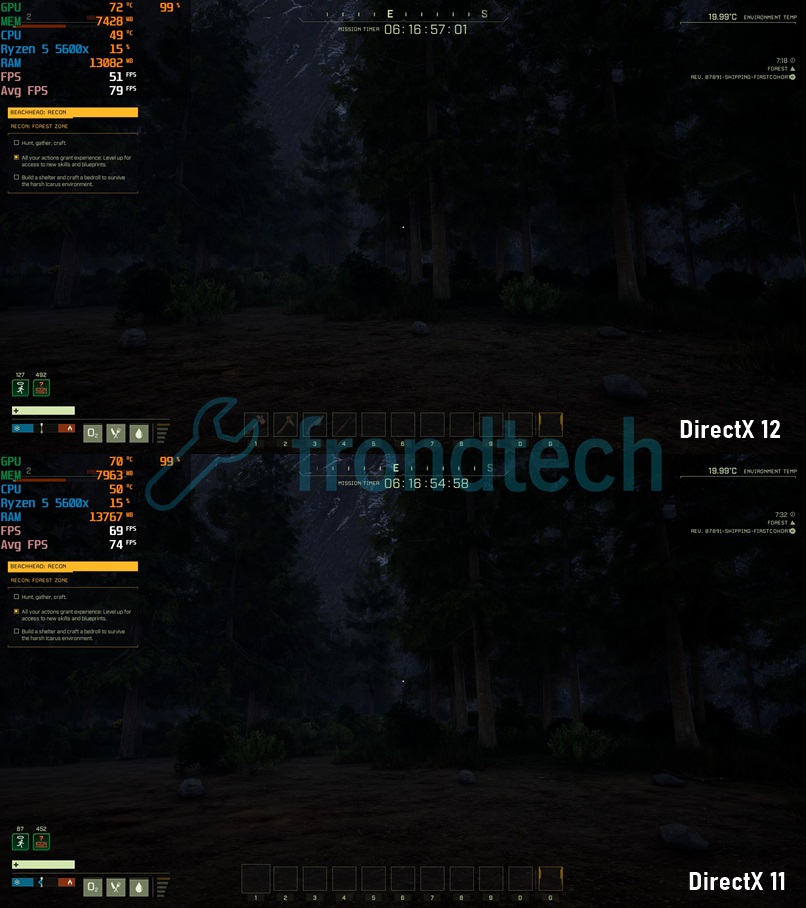 All settings are at ‘Epic’, with Ray Tracing on, and DLSS set to ‘Balanced’. As you can see, there is a difference of 18 FPS. Which, if you ask me, is huge. If you do not care about RTX, then DX11 is your best bet. If you don’t know how to launch the DX11 version of Icarus, just hit the Play button on Steam, and a window with 2 options should pop up:

Pick the first one.

DLSS in Icarus, works really well. In fact, the game looks way better with DLSS on, than with AMD FSR on. On the RTX 3060 Ti, I was getting close to 10 FPS extra with DLSS enabled.

So, just turn on DLSS, and set it to ‘Balanced’. Keep the sharpening to 0.40. And you should be good to go.

As strange as this might sound, but it actually works. The higher is your FOV, the more FPS you get. For some reason, if you increase your FOV in the game, your camera zooms out. Causing everything on your screen to look a bit less detailed. As a result, you get a significant fps boost. Check out the difference.

In this image, my FOV is set to 80 with everything else set to ‘Epic'(Ray Tracing on, and DLSS set to ‘Balanced’):

And, in this image, my FOV is set to 105, with everything else set to ‘Epic'(Ray Tracing on, and DLSS set to ‘Balanced’):

As you can see, the difference is huge. 74 fps vs 103 fps. That is a free performance boost, if you ask me.

6. Tweak the settings to squeeze out extra performance

Everything, written in this portion, has been recommended by the community. These tweaks come from a Steam user. He managed to make the game run smoothly on his RX 480. Here is what he recommends:

You can tweak the config file of Icarus to get a small performance boost. Again, these tweaks have also been recommended by the community.

Here is what you need to do. Go to this location: C:\Users\[your_username]\AppData\Local\Icarus\Saved\Config\WindowsNoEditor

The AppData folder maybe hidden for you. Here is how to unhide it:

Inside the WindowsNoEditor folder, Open the ‘GameUserSettings.ini‘ file with notepad. Make a backup of the file before that. Now under ‘[ScalabilityGroups]’, make the following changes: 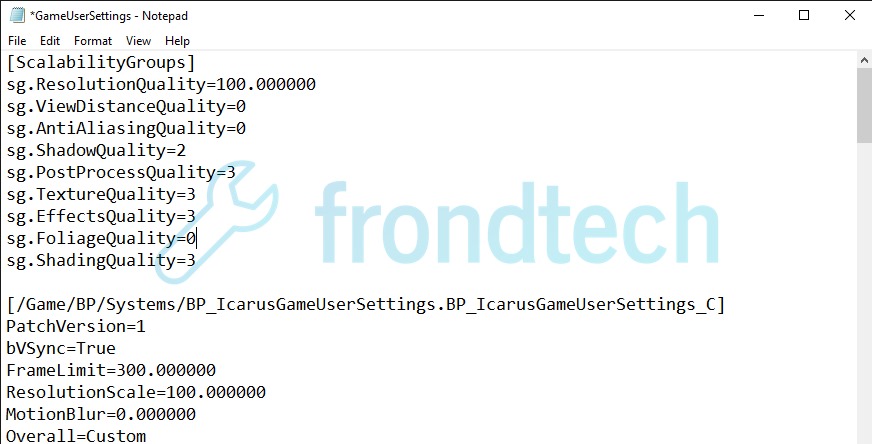 Some of these are going to override the in-game settings you just did (hence to do the game settings first). During beta, changing settings in-game didn’t always work out either. That is probably fixed now. I put this as a “base”. If its set to 0, it will look worse (will be on low), if its set to 3 it will be “high” setting.

Once you get FPS you desire, you can start increasing the graphics ever so slightly. You don’t want it to drop below 30.

These are all the fixes that I have for you at the moment. Sure, there are other things like, closing demanding applications, disabling all overlays, increasing the priority of the game via task manager, disabling Nvidia Instant Replay, Windows 10 Background Recording, etc. But I am sure that most of you have already tried all of that. So, I decided to not include them above.

Let’s face the truth, the developers don’t expect low-medium end users to play this game. The game is extremely demanding, and it is going to stay that way. The devs wanted to make Icarus future-proof. So, they ended up making the extremely heavy in the process. Just to show you how demanding Icarus really is, I have uploaded a video on YouTube. Where the game is running at maxed out settings, with Ray Tracing enabled. Check it out, it will give you a good idea of the situation:

If you think this guide has helped you, then let us know in the comment section below. And for more Icarus guides, keep an eye on Frondtech. Good luck!