Let me start by saying that I have been playing Outriders non-stop since its official launch. It is my favorite game at the moment, and this is coming from someone who has thousands of hours in games like Destiny 2, Warframe, the Borderlands series, etc. Did you get a Looter-Shooter? Throw it at me, and I will play it till oblivion.

The game is filled with mind-blowing combat, and the new DLC “Worldslayer” adds an improvement with expansions in crafting and gameplay, which were already so well-made in the game.

The game is mainly set in an alien world where you will be playing the role of an Outrider with your crazy haircut, slashing through your enemies using sci-fi guns and superpowers.

If you haven’t tried out this game yet, let me tell you, it will be your most satisfying and enjoyable RPG Looter Shooter game that you can play with your friends on Co-op. The game has a good grind but a weak storyline, but the game mechanics, graphics, combat, and gameplay makes up for it.

The PAX Tree is the secondary skill tree in Outriders that you will be able to unlock while playing the Worldslayer Campaign. Different Classes feature different and unique PAX trees, which have two branches ranging out from them.

The PAX three nodes are more powerful than the traditional skill tree nodes in the game, thus providing effects that are at par with the T3 and the Legendary Mods.

Also, note that you can allocate only up to five nodes at a once on your PAX tree, although you can respec it if you want. So this article will guide you on how to unlock PAX Tree in Outriders Worldslayer.

How to unlock PAX Trees in Outriders Worldslayer 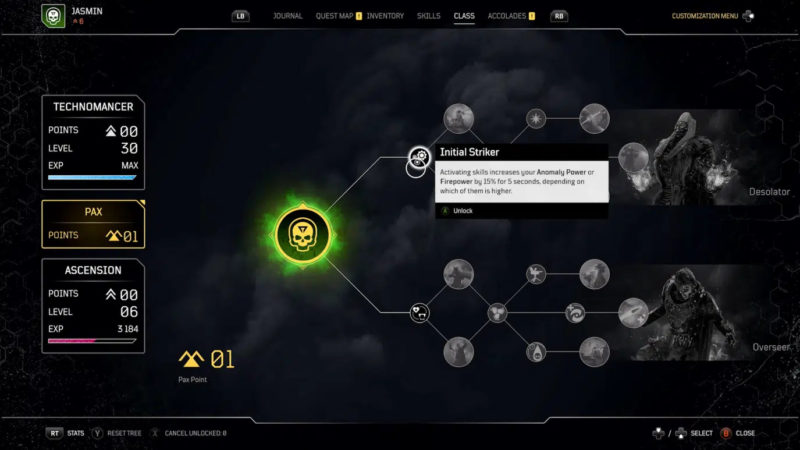 You will be able to unlock the PAX Tree once you have reached Level 30 in Outriders Worldslayer in the game. You will also need to complete the Trepedition quest, which is a part of the primary Worldslayer campaign.

Once you unlock the PAX Tree, you will have access to a different set of skill trees, and you can find it under the Class Tab on the menu. Initially, you will only have one PAX Point. You can earn more PAX Points quickly by completing main quest missions like Pilgrimage, Shards, Wrath, and the Trial of Tarya Gratar.

As mentioned earlier, you will only be allowed to allocate 5 Pax points on a PAX Skill tree. It will help if you are worried about missing any of these pax points because all of these are tied with missions and the endgame activities in Outriders Worldslayer.

These are the different PAX Skill Trees available for each class.

So this was all about how to unlock PAX Trees in Outriders Worldslayer.