Evil Dead is an asymmetrical multiplayer game featuring Coop and PVP modes. There is a wide range of maps in the game, and it also includes the famous Cabin in the Woods from the Evil Dead Movies. You will also be getting a wide variety of weapons, including Ash’s chainsaw and the broomstick.

There are plenty of characters you can unlock in the game. The iconic Ash Williams is one of them. But, on top of unlocking Ash, you can also unlock different variations of him, as well as different skins for him.

The Ash Vs Evil Dead skin is available for the main protagonist of the game, Ash Williams, who is also a playable character in Evil Dead the Game. So, let’s see how to unlock it

How to unlock Ash vs Evil Dead Skin in Evil Dead

To unlock Ash Vs. Evil Dead skin, you have to play the very first story mission in the game called “If You Love Someone, Set Them Free… With a Chainsaw”. This mission can be accessed from the menu by selecting the “Missions” tab and choosing the first tape on the top left.

As you first start the game with Ash Williams, you will see him equipped with a Chainsaw, which we can use to cut the Deadites and finish them off with great finisher moves. Apart from the primary chainsaw melee weapon, you will also be equipped with a secondary fire weapon: a shotgun or a pistol, but you need to save up that ammo for the higher-level elite Deadites. You will be starting from the Knowby Cabin, searching for Linda’s necklace near the Bronson cave. Stock up your ammo, and don’t forget to pick up the matchsticks before leaving for the mission. 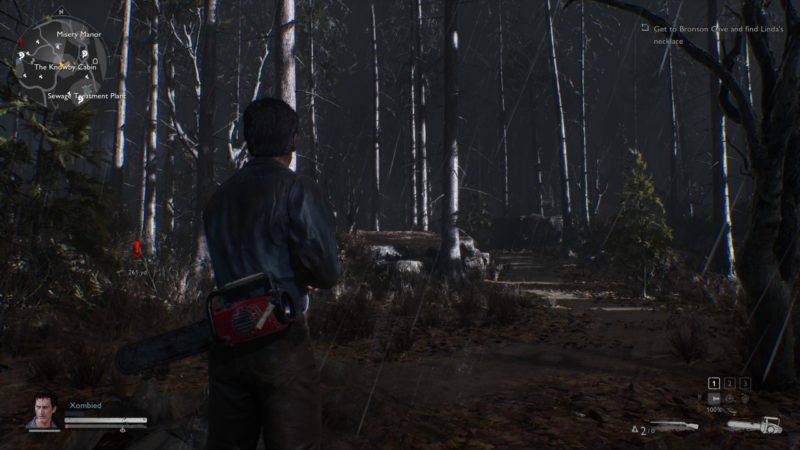 There are two parts to this mission. First, you would have to find Lina’s necklace by defeating the Elite Deadites in that cave which will complete the objective. After that, you would get yourself a Shovel and dig up his deceased girlfriend’s head, leading to the second part’s completion.

Once you are out in the woods exploring, always be careful of the floated warped traps. These traps are blurry and spawn a Deadites that might ambush the players. These Traps are spread out all over the map but at fixed points and especially on those paths where the players are most likely to travel. The best way to deal with these traps is to touch them and let the hostile spawn and then dodge them immediately to avoid their quick attacks.

As mentioned earlier, Linda’s necklace will be guarded by an elite Deadite. Kill him and collect the necklace which will complete the first objective. After that, you will be tasked with digging up Linda’s head. Upon retrieving it, head towards the work shed to put Linda out of her misery. You will find a lot of enemies on the way to the small shed. After locating the work shed, you will have to fight with the final boss, Henrietta, and a Minion Deadite enemy. The fights in Evil dead the game are quite difficult, but it shouldn’t take long if you have enough survival items and ammunition with you. After finishing off the boss, put Linda’s head in the clamp in the shed and that will complete the mission, thus letting you unlock the Ash vs Evil Dead Skin.