Apocalypse Tier Outriders – Let me start by saying that I have been playing Outriders non-stop since its official launch. The game is filled with mind-blowing combat, and the new DLC “Worldslayer” adds an improvement with expansions in crafting and gameplay, which were already so well-made in the game.

The game is mainly set in an alien world where you will be playing the role of an Outrider with your crazy haircut, slashing through your enemies using sci-fi guns and superpowers.

The game replaced the older Challenge Tier system with the new Apocalypse Tiers in Outriders Worldslayer DLC. Although both the tiers are supposedly similar, the latter provides excellent alterations in gameplay and is gratifying. This Apocalypse Tier is available for both Worldslayer owners and non-owners.

Mastering the Apocalypse Tiers will help you earn extraordinary rewards in the game. The Apocalypse Tier is like a difficulty scalar in the game and enables you to adjust the problem and rewards you get. You will have to start with Tier 1 without difficulty or loot modifiers. As you level up to higher tiers, you can earn more loot by fighting more difficult enemies.

Overall there are three main reasons for progressing through the Apocalypse Tiers, and the first one being it determines the item level for the drops, and those affect crafting. The second reason is the higher tier you are on better your chances of getting a legendary or an Apocalypse Gear, and the third reason is you can tweak the game’s difficulty just in case.

So this article will guide you on how to make progress in Apocalypse Tiers quickly in Outriders Worldslayer.

How to Unlock Apocalypse Tiers in Outriders Worldslayer

To progress in the Apocalypse Tiers in Outriders Worldslayer you will have to earn XP. As you gain more and more XP you will make progress in unlocking the next tier.

Once a new Tier is unlocked, you will be instantly upgraded to a new tier with a higher difficulty rating and better reward ratings. You can also change your tiers by selecting the tier you wish to choose. 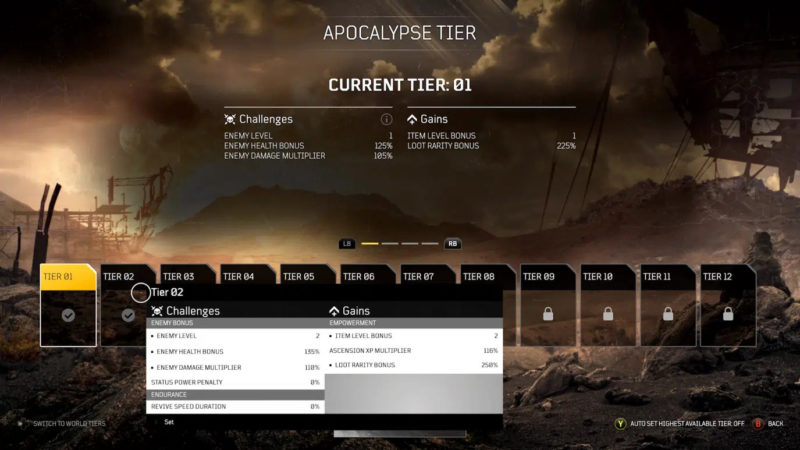 The tiers affect almost the whole game and that includes the campaign as well. The experienced players who have played the Outriders Legacy Challenge Tier system will have the highest spot in the Apocalypse Tier.

You will need to buy the Outrider Worldslayer DLC to increase the tier cap to 40. If you aim to achieve the highest tier 40 on Apocalypse, then you should also be familiar with what rewards come. Once you increase your tiers, you will have more chances of getting legendary gear and also provide a lot of character buffs.

Although the drop will depend upon the level you are currently much like Borderlands games. You will receive rarer rewards when you progress further up a tier.

The equipment level will depend upon your Apocalypse tier, for example, if you are Tier 15 then the max you can equip equipment which is of level 50, and similarly if you have the DLC, and you manage to reach Level 40 you will be able to equip items of level 75.