On this dangerous island, you’re playing as a forsaken person who desires to survive. Be aware of man-eating sharks that are ready to end your game.

But, Raft is trying to help you with its surviving resources. You can get them while traversing the world of Raft or craft them using resources like Beehive, which allow you to get honey.

Beehives are hard to prepare. If you feel the same way while crafting your Beehive and Honey to survive in this adventure world, follow this article to get yours.

How to make Beehive and get Honey in Raft

Before crafting your Beehive and Honey farm in Raft, head over to the Vasagatan shipwreck to unlock Balboa Island; once you’ve opened the island, you can get your Honey on this island.

Now, it’s time to craft your Beehive in Raft, which is pretty simple. All you need to do is head to the island where you can collect an abundance of bees and honeycombs since you should have bees to populate this Beehive. Check your inventory for any Sweep Net to hunt your beehives and honeycombs. Afterward, use your time wisely to collect beehives and honeycombs. If you don’t have Sweep Net, that’s okay. You can craft them by following the below items:

Once you’ve crafted your Sweep Net, reach the island and start to search for the Bees. Using Sweep Net, you can catch those bees smoothly, and in your inventory, you can obtain your bee jar. Get ready to craft your Beehive using the following items mentioned below. 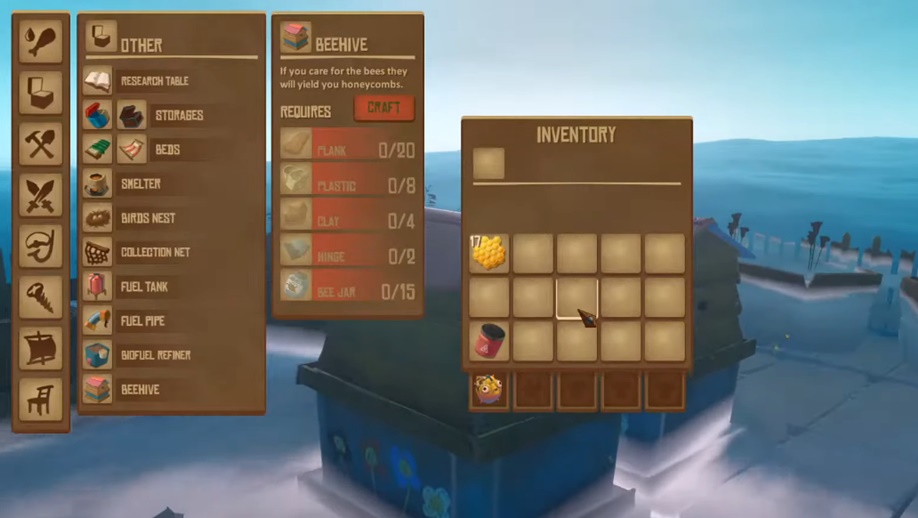 Don’t forget to check your inventory to see whether you have these items; after that, you can begin your mass production of honey.

Once you’ve completed your Beehive production in a Crop Plot, it’s time to plant your flowers. Remember to plant more flowers near a beehive which will produce many honeycombs, and give as many bottles of the honey jar. As I said earlier, you should make flower-to-honeycomb and follow the ratios below to craft each Beehive.

Alright, to gain your Honeycomb per reaping, start to cover your beehives with small crop plots from all sides. Don’t forget to check that each crop plot has three flowers.

Finally, you can use your Honeycombs to fill your jars of honey. It will help you with multiple things like food, and if you injured yourself, you could use honey as a healing salve. On top of that, you can use honey to make biofuel to increase your engine speed.