Gear level V Rising – Stunlock Studios’ V Rising is an online, open-world Vampire survival game. As a vampire, you must emerge from the ashes to seek blood from unwary villages dispersed around Vardoran’s ever-changing and enigmatic landscape.

V rising provides an uncommon experience. As a Vampire, you could pillage villages, attack bandit camps, and traverse the realms of otherworldly monsters as you explore a wide-open world with companions or solitary. In order to expand your vampire empire, you must rebuild your castle and convert people into faithful followers. In a realm of strife, make online allies and wage war against other players. The Game’s plot lies in – “After centuries of hibernation, reawaken as a frail vampire. To recover your strength, look for blood in adjacent settlements while hiding from the hot sun.”

Now, to survive in the world of V Rising you need to keep track of your Gear Level or Gear Score. This feature works just like Lost Ark and Destiny 2. Your Character Gear Level is the total of the Gear Levels of your weapons and armor. For example, if you have 4 armor pieces with each having a Gear Level of 2, and a Gear Level 3 Weapon. Your total Gear Level will be 11.

Let’s check out how you can increase your Gear Level in V Rising, as it is very important for beating high-level bosses.

How to Increase Gear Level in V Rising

You can increase your Gear Level in V Rising by crafting and obtaining stronger equipment and gear. Crafting BETTER gear increases your Gear level in the game. On top of that, you will also get perks from the things you make and equip. Armor will frequently increase Physical power and Max health, but only when players complete a full Armor set. Players who do not have the entire Armor set will not receive the full benefits of the armor.

Weapons, on the other hand, raise Gear level and fulfill specialized tasks in addition to being combat weapons. Axes, for example, are used to obtain wood and provide benefits when cutting down trees, swords are used to chop plants, and maces are used to mine. Weapons also improve Gear level based on their quality and crafting tier. So, if you want to boost your Gear level in V Rising, your best chance is to create workbenches and fight bosses to obtain more crafting components.

Initially, to increase your Gear Level, keep playing the game until you unlock the Simple Workbench. Now build the Simple Workbench from your Build Panel. As soon as you finish building the workbench, interact with it. You will notice new and powerful weapons and gear, you can craft. Gather the necessary resources and craft your upgraded Gear. 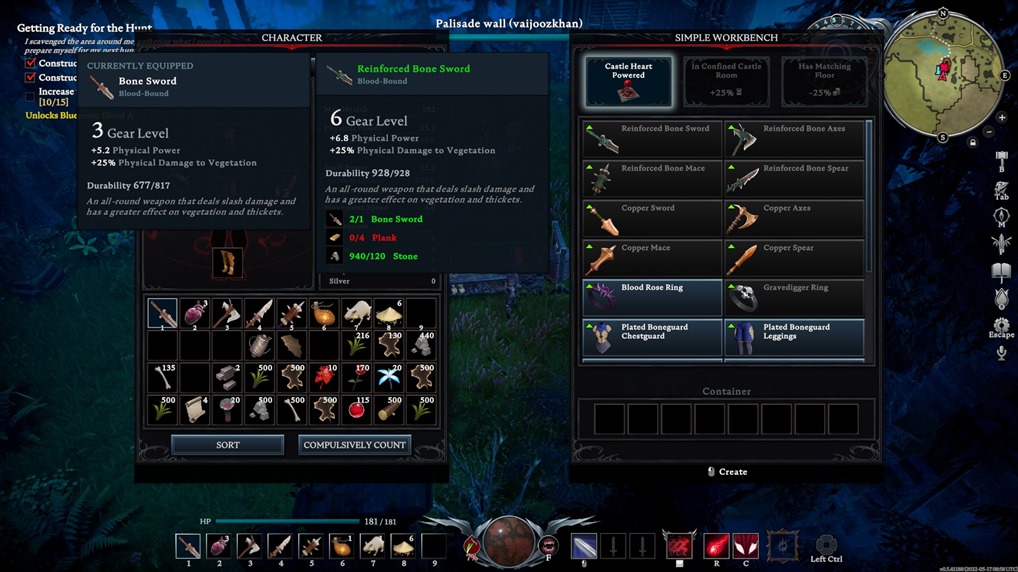 If you think this guide helped you, let us know in the comment section below. Also, you can check out the other V Rising directions on Frondtech. Good luck!