It feels like just yesterday, only, we got the Witch Queen update. And here we are, already in a new season of Destiny.

The Season 17 or Season of the Haunted update has brought a handful of content to the game. The last time I checked, the size of the update was around 6 GB on PC. Which might be not as huge as Witch Queen. But, there is enough content to keep players going for a while. There are new Exotics, a new activity called the Nightmare Containment, a brand-new destination called the Derelict Leviathan, a ton of new powerful Legendary weapons, Solar 3.0.

But there is another addition that might not be interesting for everyone. But the veteran players know what’s going on.

Player titles in Destiny 2 have always had their own share of grinders. If you don’t know what I am talking about, it is the title that you see on the top of the names of players. Pretty sure you have seen few Dredgens and Unbrokens roaming here and there.

Season 17 or the Season of the Haunted has also added a new title in the game. And looking at the name, I personally think a lot of players would be interested in getting this on top of their names. I am talking about the “Reaper” player title.

Yes, you can actually get “Reaper” title in Destiny 2, now. Imagine the scenario. A Hunter, wielding a Scythe, with the Reaper title on top of his/her head. Pretty sick stuff, isn’t it?

How to Get the Reaper Title in Destiny 2

To get the Reaper title in Destiny 2 you will have to complete all the Season of the Haunted Seal Triumphs. Here are the Triumphs: 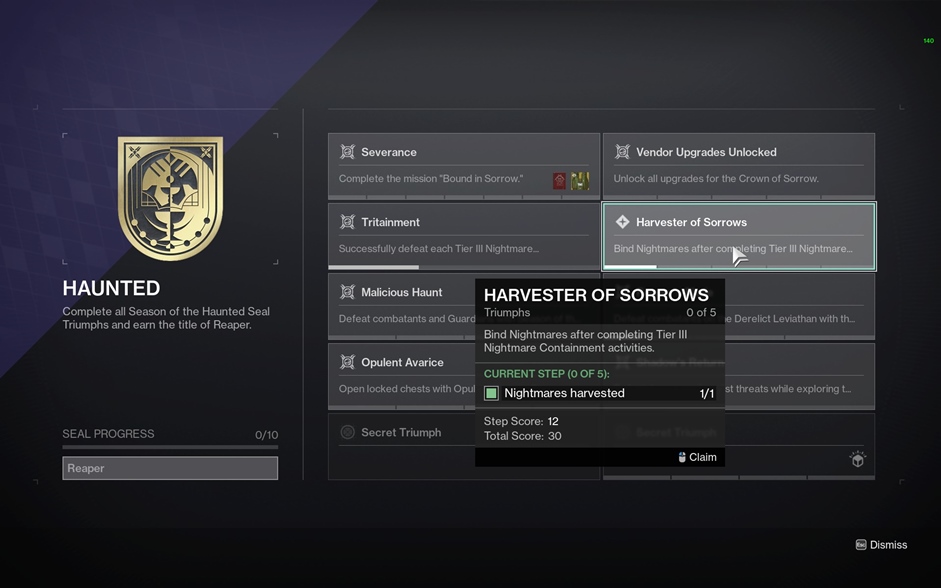 So, a total of 10 Triumphs, that you have to complete, in order to complete the Haunted Seal. Also, completing the “Severance” triumph will give you the Tymbal Lucidae ship.