The seal you receive after the reprised King’s fall raid is called ‘King’s Fall’ only. And by completing it, you will get the Kingslayer title in Destiny 2.

Actually acquiring it takes the completion of a bunch of Triumphs to be very straightforward. Some of these triumphs are challenges, smaller challenges let’s say, some encounter-triumphs, and finally completion of the master mode. 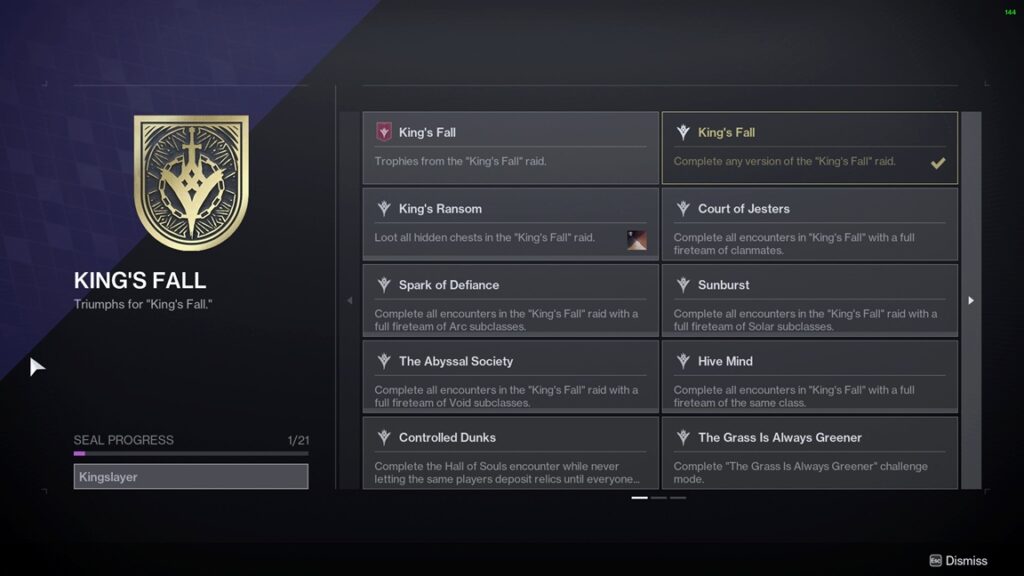 Here are all the Triumphs you need to complete to get the Kingslayer Title in Destiny 2:

You have to complete a basic version of the King’s Fall raid.

So there are three chests in the King’s Fall raid, all of which you need to search for and loot, that’ll take you a step forward.

Gather your clan, because you’re going to need to get through all the encounters amidst the King’s fall raid.

The Spark of Defiance

You’ll also have to complete all the encounters with a team of Arc-Subclass.

Well, another one of these, going through all the encounters but with a team of solar subclass.

Doing all the encounters with a team of voids. Wherein hunters can use tethers, Warlocks with nova-bombs, and titans with a ward of dawn.

Completing all encounters with a team of the same class, 6 warlocks would suffice.

Completed Hall of Souls encounters without allowing the same players to deposit relics until everyone else has done the same.

The Grass is Always Greener

Doing and completing the Grass is Always Greener challenge, is another task you’ll have to do.

This is another triumph you’re required to complete, you have got to complete the Basilica Encounter while never stealing a brand from any player standing near a totem.

This is another challenge that you’re required to complete.

Completing the Warpriest encounter without ever allowing the same player to obtain the Brand before everyone else has it.

Start and complete the gaze-amaze challenge.

As the name suggests, this task requires you to complete the Goloroth encounter without ever allowing the same player to get Golgoroth’s Gaze before everyone else has.

Get done with the Under Construction task.

The Floor is Lava

While Never Allowing A Torn Between Dimensions Player To Touch The Ground in The Daughters Encounter.

Completing the Hand’s off challenge is also required, here.

As mentioned earlier, you’ve got to complete the Master version of the King’s fall.

Get done with the Oryx encounter by detonating the bombs, while moving to the last stand, we’ve covered this in another guide we’ve composed, so make sure to check that one out too!

Finally, you’ve got to complete all the encounter challenges in the master version of the King’s fall.

That’s pretty much everything we had on how you could complete the King’s Fall Seal and how to get the Kingslayer title. For more such guides, stay tuned to Frondtech!