The Vow of the Disciple is a new Raid that came along with the Destiny 2’s newest expansion, The Witch Queen. The new Vow of the Disciple Raid brings in an Exotic Pulse Rifle that you can earn by completing it. So this article will guide you on how to get the Collective Obligation Rifle in Destiny 2 the witch queen.

The new Season of the Risen has kicked off with The Witch Queen holding the Baton, in Destiny 2. We are having a great time with the DLC so far. The Campaign is also great with the new Savathun’s Throne World looks new and doesn’t look like a reskinned world.  Destiny 2 the Witch queen bought some of the best bosses and  Lightbearer Hive enemies, top class Legendary weapons, like the Funnelweb and the Ragnhild-D, followed by unique Exotics, like the Parasite and the Osteo Striga.

The new Raid has hit a great milestone and bought in a very positive response for the Destiny 2 The Witch Queen DLC. Apart from the multiple encounters, you will also face one of the most intense and powerful bosses that you will come across out of all the Destiny 2 raids. Finishing the new Vow of the Disciple unlocks a lot of gear and a handful of awesome loot. That includes, if you spend more time in the Vow of the Disciple raid, you will be rewarded with much more powerful and incredible gears.

And one of those rewards include the new Collective Obligation Pulse Rifle.

The Collective Obligation is a new Exotic Pulse Rifle in Destiny 2, that has arrived with The Witch Queen DLC. This also has a very low drop rate, just like the other exotic raid weapons like the Vex Mythic Class. This is a unique weapon with the Intrinsic Trait, Void Leech, which allows this Pulse Rifle to leech Void Rebuffs when you damage your enemy, when they are weakened, suppressed or even volatile. Once it charges, you can hold the reload button to swap the firing modes.

When you are on this mode, the damage incurred from this weapon is the same as the void debuffs that were leached earlier. You can also see another unique perk on the weapon, known as Umbral Sustenance. And because of this trait the weapon’s magazine is reloaded automatically when you gain Devour, Invisibility or get a void Overshield. 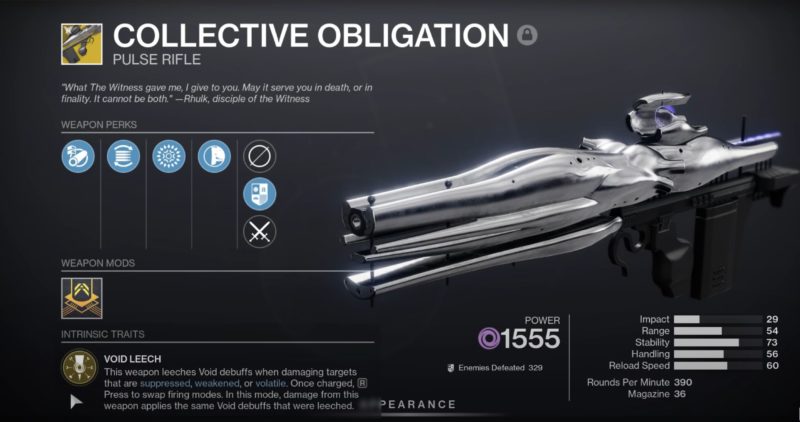 How to get the Collective Obligation Pulse Rifle

The Collective Obligation Pulse Rifle will be a random drop when you will be doing the new Vow of the Disciple Raid. The drop will be random, just like the One Thousand Voices from the Last Wish and the Vex Mythoclast from the Vault of Glass.

Right now, you can get this Collective Obligation Pulse rifle as a drop from the chest after you defeat the last boss, Rhulk, in the Vows of the disciple raid.

This exotic Pulse rifle features a wonderful synergy with the newly revamped Void 3.0. The new Intrinsic Trait, called the Void leech. In the essence, the new collective Obligation Rifle is capable of storing all the three debuffs that you get and use them in such a way that you don’t need to trigger the abilities.

So this is how to get the Collective Obligation Exotic Pulse Rifle in Destiny 2 the Witch Queen.