There is no doubt that Tiny Tina’s Wonderlands is a “Borderlands” game. And just like Borderlands games, Wonderlands also has Legendary Weapons, Gear and Spells. These Legendaries are, in no way, easy to find. And, if you do not have any idea about where to look for them, your mind end up wandering the huge open world of Wonderlands, aimlessly.

In this article, I am taking a look at the Sworderang in Tiny Tina’s Wonderlands. Let’s check out what it is, and where you can farm for it.

Sworderang is Shotgun of the Legendary or Orange Rarity in Tiny Tina’s Wonderlands. There are several variations of Sworderang, and the prefix and suffix of this weapon change depending upon the card that you get. It is a Feriore Weapon, and it comes with all Elements.

Sworderang, as the name suggests, is a mixture of a sword and a boomerang but in a shotgun form. We have seen a similar weapon like this in borderlands 2 called the Gunerang, except this time you throw a sword instead of the gun itself, and it comes back and explodes on impact. But you do have to be careful as you will take in that certain amount of damage if it comes back and hits you. The thrown sword spins and slashes anything that comes in its way. Although this gun is pretty hard to use because the swords sometimes don’t hit the enemies directly. Also, if the swords fail to find an enemy nearby they will come back and damage you instead. The sword does a lot of damage when it hits an enemy but since this isn’t a weapon that you can use directly at face to face gunfights, it might be a bit tougher to use against armed enemies. It is a good weapon for crowd control but in boss fights, there are far better options available. 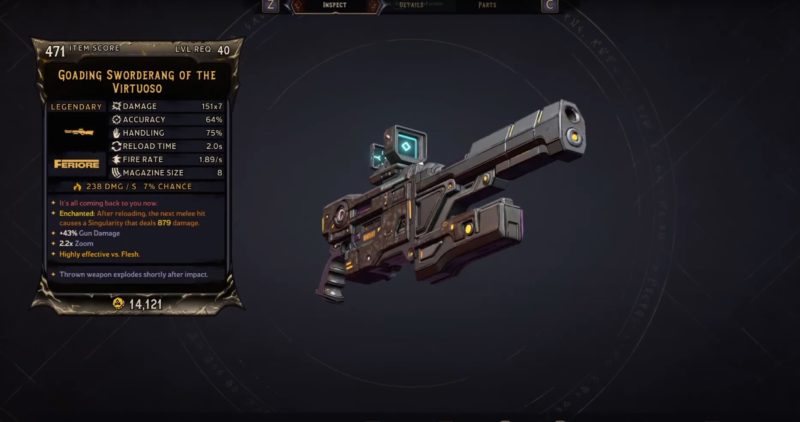 How to get Sworderang in Tiny Tina’s Wonderlands

To get or farm the Swoderang weapon in Tiny Tina’s Wonderlands, head over to the Sandchoked Catacombs at the Ossu-Gol Necropolis, and you have to run towards the Obelisk as marked on the map. It’s a bit of a long run, but that shouldn’t make you worry, as you will find a save station just before you enter the arena so that you can respawn in case you get eliminated during the fight. For the Obelisk, you have to activate it and fight a bunch of enemies until a point where the Obelisk will be destroyed, and a boss will spawn from the ruins of the Obelisk. The boss we are fighting today is called the Mandiblon, Chomper of Skulls. The Mandiblon drops the Sworderang Legendary Shotgun in Tiny Tina’s Wonderlands. 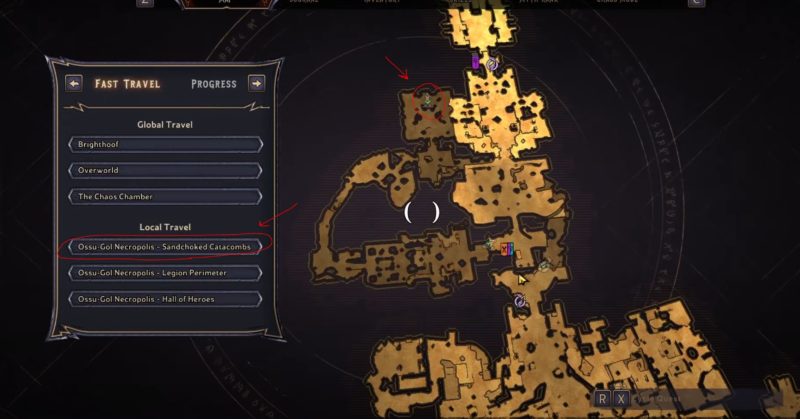 Mandiblon is a boss of the Shark Type. This boss is pretty healthy so make sure to have a good weapon in your arsenal. Since this is a shark type of boss, bring a fire weapon along with you as fire deals more damage when used on flesh type enemies. And also don’t forget to increase the loot luck before fighting Mandiblon by finding the lucky dice in the area to help you get closer to the chances of getting this legendary once you slay the shark boss. Not every run guarantees a Sworderang, but it is fairly easy to get if you are on higher levels. 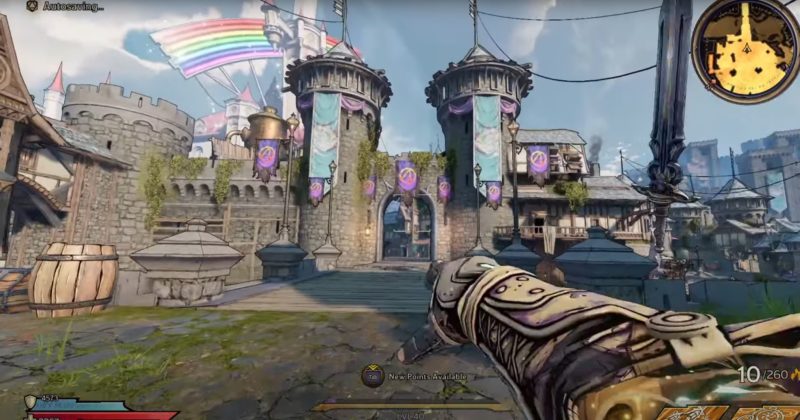