Striped Finehide MHR Sunbreak – After much hype and anticipation, the Monster Hunter Rise has finally released the Sunbreak Expansion that they have been teasing for a long time. This new expansion improves upon many existing aspects while adding new and fresh content.

Coming to the main topic of the article, You can farm for the Striped Finehead from the Remobras in MHR Sunbreak DLC. This is a monster material you need to collect from the tiny monster known as the Remobra. These Remobras can be found in locations like the Shrine Ruins, Sandy Plains, Lava Caverns and the Flooded Forests. This Remobra falls under the Wyvern category and looks like a snake with enormous wings.

These Remobras are common and can be found in all locations mentioned. It is not challenging to slay them off. But there is no guarantee that every time you slay the Master Rank Remobra, you will get the Striped Finehead drop. You will have to grind for it a little, and it’s worth it, as finding the resource will help you craft the complete Remobra X Set.

So this article will guide you on how to get Striped Finehead in MHR Sunbreak.

How to get Striped Finehide in Monster Hunter Rise Sunbreak

Once you have unlocked the Master Rank, head over to the Shrine Ruins, Sandy Plains, Lava Caverns and the Flooded Forests to find Remobras; since the DLC added a lot of maps, there are more chances of you finding the Remobras. These are the places that you should especially look for the Remobras to get the Striped Finehead in Monster Hunter Rise Sunbreak. 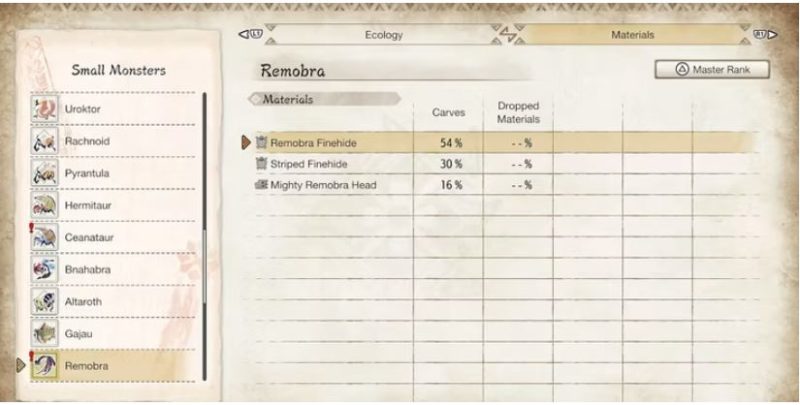 You can try looking for the Remobras in the Lava Caverns as there are more zones under it where you will be able to find the monster. This is also the best place to farm Striped Finehead. You will have a 30% chance of getting the Finhead dropped from the Master Rank Remobra. If the Wyvern doesn’t drop one on your first attempt, continue doing it until you have enough Fineheads for the Armor set. Get to the Smithy once you have collected the required Striped Fineheads, and you will be able to craft the Remobras X Armor set. The Remobra also drops Remobra Hide and Might Remobra Head.

So this was all about how to get Striped Finehead in Monster Hunter Rise Sunbreak.

If you think this guide has helped, then let us know in the comment section below. Also, if you are facing game problems, try checking out our other guides on Monster Hunter Rise. Who knows, you might end up finding a fix.