Red Nucleus Tower of Fantasy – The shared open-world MMORPG sci-fi adventure Tower of Fantasy, created by Hotta Studio and published by Level Infinite, is now accessible worldwide on PC and mobile devices. It is set hundreds of years in the future on the remote planet of Aida. Players will be able to enjoy intense battles, a post-apocalyptic sci-fi art style influenced by anime, free-form character development, and exciting combat.

By accomplishing various tasks, you can earn multiple currencies in this game, some of which are simpler to get than others. It can be difficult to decide where to spend your hard-earned money, but fortunately, many locations take these currencies. You’ve Just got to conduct some research to determine where you can save the most money.

The components needed to carry out Gacha Pulls, also known as Special Order in Tower of Fantasy, are found in the Nucleus. There are three different categories of Special Orders, each with a unique set of terms and a currency. To obtain SR and SSR weapons, which include Simulacra, an AI replica of the weapon, you’ll need to complete these Special Orders.

In this particular guide, we’ll cover how you can get the much-needed Red Nucleus in the game Tower of fantasy, and make the online world a little easier for you all! 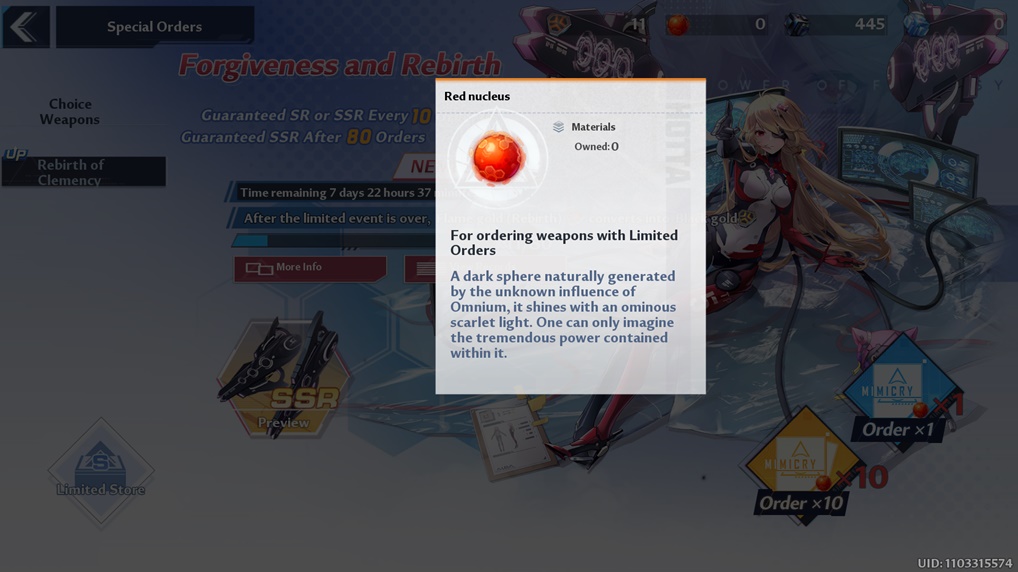 How to get Red Nucleus in Tower of Fantasy

Now, one thing you probably do know, but we’ll still cover for you guys, is that there are merely 3 ways using which you could obtain the red nucleus, which are:

By taking part in the game and gathering Dark Crystals, you can obtain Red Nucleus for basically nothing, meaning free. You can get these crystals when you finish missions and milestones. Dark crystals are crucial to the game and can be acquired in a variety of methods.

They can be obtained for real money, of course, but as mentioned earlier, they can also be obtained for nothing by just playing the game. You’ll earn token sums of dark crystals by accomplishing your daily and weekly objectives and moving forward in the narrative.

Weapons are extracted from extremely constrained banners using the Red Nucleus. You must pull on the flags with your Red Nucleus in order to have a chance at obtaining the restricted SSR character.

There are no assurances that you will receive the character, though, just like in many other Gacha games. We strongly advise saving your Red Nucleus until you have enough to hit the pity on a banner because of the low chances of you being able to obtain it back.

That pretty much wraps up the guide on how you can obtain the red nucleus in the game Tower of Fantasy, for more such articles be sure to come by at a later time!