Red Hellion Wonderlands – The most popular Looter-Shooter franchise is back. But this time, in the form of an RPG game. Tiny Tina’s Wonderlands is the latest Borderlands game, and it finally available across all the major gaming platforms and looking at the number, I would say that the game is performing decently. Of course, the player base is nowhere close to what it was when Borderlands 3 launched. But, as long as a game looks and feels like a borderlands title, the fans don’t care what the name of the game is. They will play it, regardless.

Anyway, just like Borderlands games, Wonderlands also has Legendary Weapons, Gear and Spells. These Legendaries are, in no way, easy to find. And, if you do not have any idea about where to look for them, your mind ends up wandering the huge open world of Wonderlands, endlessly.

In this article, I am taking a look at the Red Hellion in Tiny Tina’s Wonderlands. Let’s check out what it is, and where you can farm for it. 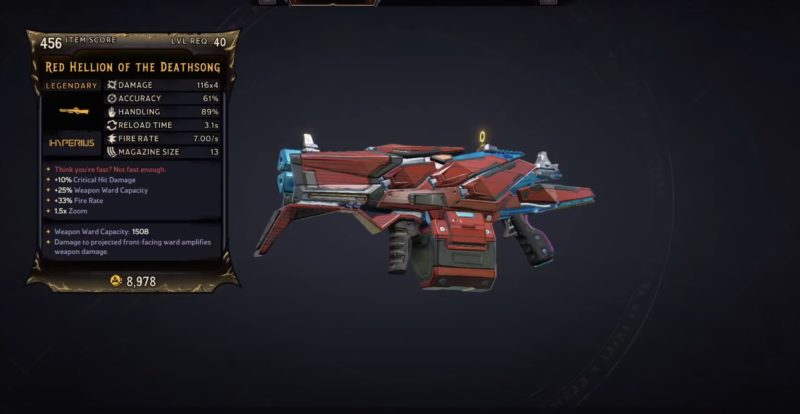 The Red Hellion is a shotgun of the Legendary or Orange Rarity type in Tiny Tina’s Wonderlands. There are several variations of these Red Hellion shotguns and the prefix and suffix of this weapon change depending upon the card that you get. It is a Hyperius Weapon, and it comes in all the elements such as fire, cryo, poison etc.

The gun shoots out four pellets at a time and depending upon how fast you move you will be able to shoot more bullets. For example, at default, you may be able to shoot four pellets at a time but if you are running you can shoot pellets from somewhere around five to eight. It’s basically the faster you sprint, the more pellets you can shoot in one shot. It is a nice shotgun when you pair it with the Run and Gun skill of the Stabbomancer.

Although the weapon looks pretty good as per the specs go, but it is not that special at all because the recoil is pretty bad on it and shooting during fast combat is a pain.  Even with a full build, I was not being able to perform at my best while playing with it. One nice thing about this gun is that it has a large magazine, so you can use it point-blank but a disadvantage being it can suck up your ammo pretty quickly. A good weapon if you are on the lower levels but on a higher level you might need to take out your bigger guns!

To get the Red Hellion you need to do a mission called the Walk the Stalk and the mission is accessible from the Overworld Map. Once you are on the overworld Map you can fast travel to Driftwood and head straight over to the Obelisk as shown in the picture. Now to complete the Obelisk and make the boss spawn, you would have to continue clearing enemies until a point where you can destroy the Obelisk. It might take a bit of time for you to complete this mission.

You will face the Obsidian Wyvern boss once the Obelisk is destroyed. Take down the dragon and make sure you don’t eliminate him over the cliff otherwise all your loot is going to fall off. The Red Hellion should fall once you have slain the Obsidian Wyvern Dragon boss. Also, not every run guarantees a Red Hellion Weapon, but it is fairly easy to get if you are on higher levels.