Ragnhild-D Destiny 2 – Wondering how to get the Ragnhild-D is Destiny 2? Don’t worry, we got you.

Shotguns are one of the most preferred weapons in Destiny 2 and whenever a new shotgun is introduced in the game, the whole Destiny community would jump on it to try out and check how powerful it is. The Ragnhild-D is a Shotgun of Purple or Legendary rarity in Destiny 2. This weapon was added in Season 16 or The Witch Queen, in Destiny 2. It is an Aggressive Frame Kinetic Shotgun. Which means it goes to the Primary Slot. It is a 55 RPM Shotgun, with a magazine size of 5. And the Ragnhild-D is probably one of the best shotguns, that Witch Queen has to offer

So what is so special about the Ragnhild-D? First thing is, this is an Aggressive Frame shotgun, which means it is on par with OP shottys like the Astral Horizon. On top of that, this goes in the primary slot, which means you can easily pair this with the awesome new God-tier SMG, Funnelweb. But the best part about the Ragnhild is that the barrel, on this Shotty, is extremely narrow. Which allows the user excellent visibility. The Range on this weapon is exceptional too. The Ragnhild-D is great in both PvP and PvE, and if you use Shotguns are your main weapons, then you should definitely farm for this. Also, this weapon is craftable, which means you only need to acquire this weapon once. Level it up, and enjoy the Enhanced Intrinsics and Trait. 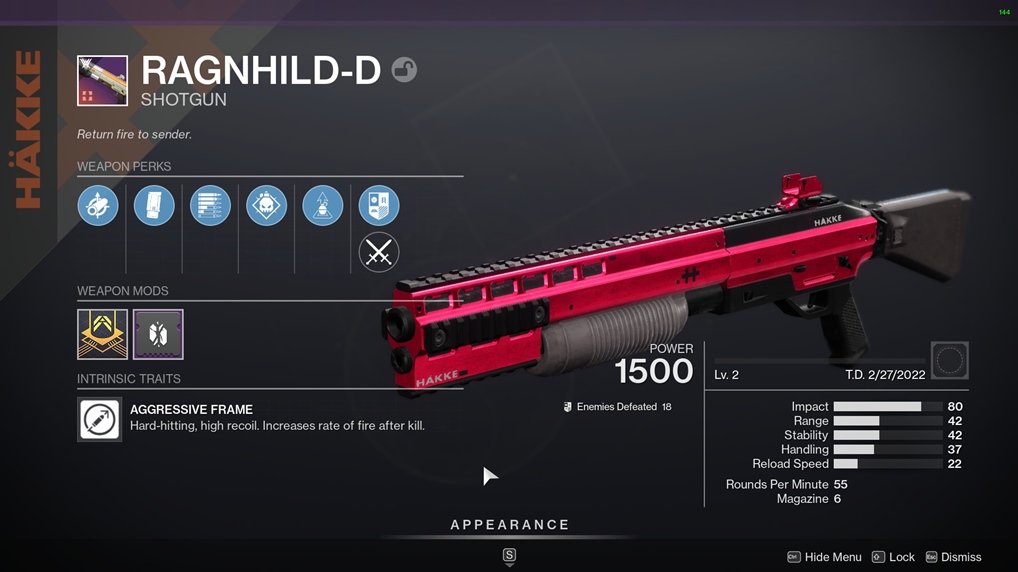 Let’s take a look at the base stats of Ragnhild-D:

Now, the idea of a God Roll can be different for different people. If you ask me, then a Ragnhild-D PvE God Roll should have:

Now, the idea of a God Roll can be different for different people. If you ask me, then a Ragnhild-D PvP God Roll should have:

Ragnhild-D is a world drop, and the drop is complete RNG-based. I got mine while doing the “Reshaping the Enigma” quest. Here are the best ways to farm for it: