The latest edition of Shadow Warrior 3 is packed with crazy enemies, stunning visuals, new weapons and some powerful Gore Weapons as well. So in this article, we will guide you on how to get Gore weapons in Shadow Warrior 3 game.

There are several types of Yokais and enemies that you will encounter in this latest edition of Shadow Warrior. But except for one type of Yokai, where after executing the enemy with a Finisher move, you can obtain a gore weapon for a limited amount of time. You can take down any enemies within a fraction of a second using these weapons. So in this article, we will guide you on how to get Gore Weapons in Shadow Warrior 3. 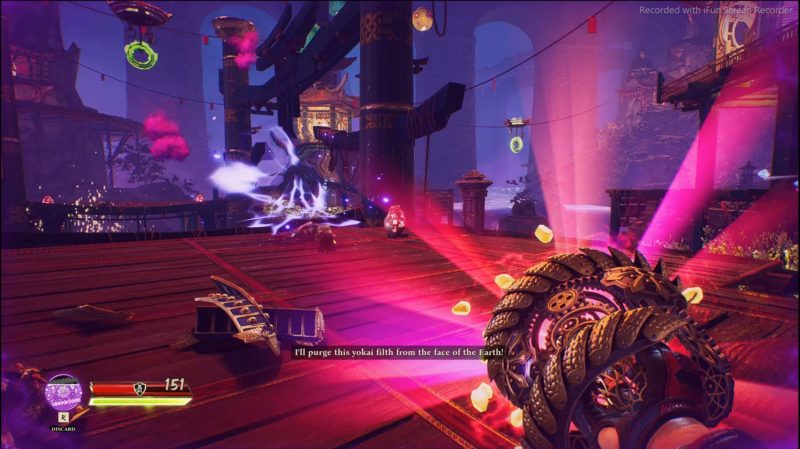 How to get Gore Weapons in Shadow Warrior 3

The Gore weapons in the Shadow Warrior 3 game can be obtained after you have taken down an enemy with a Finisher move. The Finisher move is visually very spectacular and gruesome at the same time. This finisher move can instantly take down any enemy, except for the bosses. You can perform a finisher move by pressing the Q button.

Also, you do need to keep a check on the Finisher points. For example, for smaller enemies and Yokai, you only need one finisher point. But for bigger ones like Hattori and Slinky Jakku etc, you will take at least two finisher points. Gassy Obariyon is the only Yokai in the game who will need three finisher points to perform the execution. It is very easy to farm finisher points, as you get those from the fallen enemies only. You will also encounter certain yellow spawn points in the later stages of the game.

The Gore Weapons vary from enemy to enemy and depends upon the usefulness, power and animations as well. The animations when you use the gore weapons are visually very rich and spectacular. There is one Gore weapon that you cannot use head to head offensively, is the one that drops specifically from the Shogai and Yoriki enemies, and resembles more of a Scorpion type of finisher from Mortal Kombat which helps double your max HP.

The only non-boss enemy that you cannot perform a finisher on is a type of Yokai that appears in huge numbers and have explosives strapped on their backs. Because of the explosives, you can easily shoot them and eliminate them in groups from a distance.

This is also to note that these Gore weapons will not stay in your inventory and will be automatically thrown away after a limited time.

So this was how to get Gore Weapons in Shadow Warrior 3.