Golden Muck MHR Sunbreak – After much hype and anticipation, the Monster Hunter Rise has finally released the Sunbreak Expansion that they have been teasing for a long time. This new expansion improves upon many existing aspects while adding new and fresh content.

There are a lot of materials that you can find in the Monster Hunter Rise Sunbreak DLC. You can easily make a lot of Master Rank weapons if you upgrade the low-ranked gear in the weapon tree.

Almudron weapons in Monster Hunter Rise Sunbreak either need you to create its Master Rank version, or you can upgrade it if you have lower-ranked almudron weapons.

But to start preparing your Almudron Weapons, you will need the Golden Muck, and so this article will guide you on how to get Golden Muck in Monster Hunter Rise Sunbreak.

How to get Golden Muck in Monster Hunter Rise Sunbreak

The Golden Muck is a low-level but uncommon material that drops off the Almudron. The Golden Muck has a total 22% drop chance as a target reward. The unique resource has a 13% chance of you getting as Capture rewards. You can get a reasonable 30% drop rate if you farm the low-level Almudrons.

Start with the quests that are in the village. Those quests are easy to complete and rewarding as well. You can also take on the six-star “Hermit of the Swamp” Village quest. You can alternatively try out the three-star “Down and Dirty” Hub Quest. 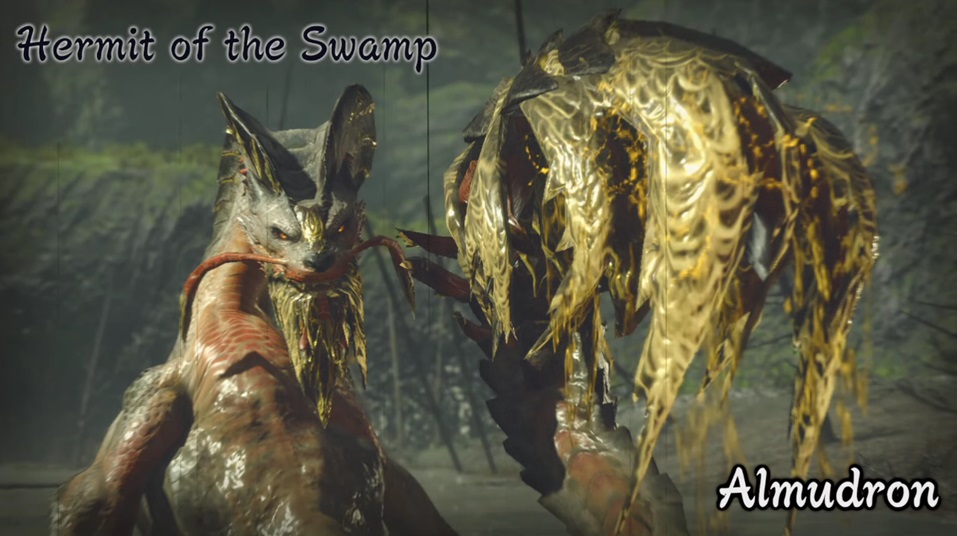 The Hub monsters are much more challenging to take down than the village monsters. The village monster typically has less health and deals more minor damage. You are entitled to eight target rewards, so there is a 40% chance of getting two Golden Mucks.

These monster hunts won’t take more than a minute if you are already in the Master Rank. The Village Almudron will not be an issue if you are already on the High rank. Also, it will serve as an introduction to this monster as well. These master rank monsters are typically more powerful and feature a variety of move sets. You can start with the low-rank Almudron monster to set your expectations of what is coming up next.

You can also farm for the Gathering Hub version of the Almudron. It has 20% more damage but kept its attack pattern the same. For us, the Village Almudron missions took 25% less time than an average hub quest. So it’s best to do the Village Almudron as the less time you take to hunt a monster, you will utilize that time to run a couple of more times to get Golden Muck as a reward.

Using the Golden Muck, you can craft:

So this was all about how to get Golden Muck in Monster Hunter Rise Sunbreak.

If you think this guide has helped, then let us know in the comment section below. Also, if you are facing game problems, try checking out our other guides on Monster Hunter Rise. Who knows, you might end up finding a fix.