Crests Diablo Immortal – Diablo Immortal is a free-to-play (MMO) action role-playing game (ARPG), developed by Blizzard Entertainment and NetEase. It is an online-only game, and the story takes place between the events of Diablo 2 and Diablo 3.

Elder Rift is a fast activity with good payouts that you can harvest. It is possible to accomplish it without using Crests, but the prizes will be significantly lower. If you use Crests, though, you will receive additional loot and a chance to obtain a gem. So, getting to it, there are two types of chests in Diablo basically, Legendary and Rare chests. 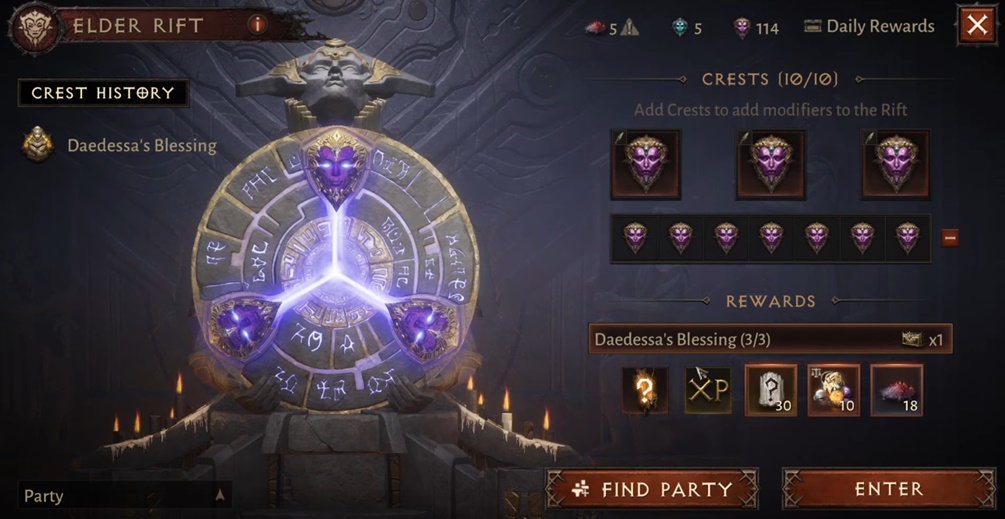 How to get Crests in Diablo Immortal

The easiest way to get Crests in Diablo Immortal is to purchase them using real money. This kind of feeds the “pay to play” factor, but still, if you’re in dire need of the Crests, you could opt for this.

Diablo Immortal’s premium currency, Eternal Orbs, may be used to purchase one Legendary Crest for 160 Eternal Orbs. As in, a currency that can only be purchased with cash. It can also be costly. The bundle of 300 (+15) orbs costs $4.99, which is insufficient for two Legendary Crests. The bundles get more appealing, such as 1,500 (+150) orbs for $24.99 (with 10 Legendary Crests). However, they are still rather costly in general. Consider purchasing the Battle Pass if you want to get more bang for your buck. Now, assuming you’ve purchased some Eternal Orbs, you can then, under the Shop’s Crests area, exchange Eternal Orbs for Legendary Crests. Alternatively, you can swap your Orbs with the Crest Merchant, who is located directly beneath the Elden Rift.

Apart from these ways to obtain the crests, you get a free crest every day, just by accessing the Elder Rift Main menu. Even if you do not play the game daily, you could probably stack up on a number of crests via this method.

One final method to obtain Crests in Diablo is Hilts. Hilts is another exchange currency you get for completing achievements. You can use these hilts to exchange with the Hilts Trader, precisely located on the East Side of Westmarch. You could just jump in and spend all your Hilts, but it appears to be the simplest way to obtain crests in Diablo Immortal, since Hilts are not farmable, they become increasingly rare and valuable as you continue. So, if the Elder Rift isn’t a top goal for you, you should probably save your hilts as you might need them for something else later on in the game.