Set in the European city of Villedor and you have to play as Aiden Caldwell, a pilgrim. The Dying Light 2 game is always known for its extremely smooth parkour movements and responsive environments. This game is a follow-up to the original 2015 Dying Light game, which once again fuses the infected and parkour mechanics along with a new stealth element that is added to their current installment.

The third and final part of the Authority pack DLC is here. The Dying Light fans will always remember the free DLC weapons and cosmetics that were released for the game in the last instalment during the very initial days of its launch, and it seems like the new Dying Light 2 game is going to follow the same path as well. Just like we had Dying Light The Following DLC as a story expansion, Techland promised a new story expansion for the Dying Light 2 as well, but the release date of the same is not known yet.

However, the final part of the Authority Pack DLC is out on Steam now. It is again free to play the expansion, and you don’t need to purchase any season pass to claim the Authority DLC Pack 3 Gear in Dying Light 2 as long as you own the base game.

The first major DLC from the new title Dying Light is called the Authority DLC, and it comes in three parts. It is free to play expansion and the DLC will get downloaded and installed whenever you click the update button on Steam. It is a very small update. The update adds the Authority pack items into the game, which includes both cosmetics and weapons. Once you update the game on the Steam platform, you are ready to go in-game and claim the DLC items. Just visit the nearest Stash, Press F to access it, and you will have it displayed under the Extras Tab.

The three DLC Parts are as follows.

The Authority DLC Part 3 gives the final piece of the DLC, The Two-Handed Authority Hammer, which makes a total of seven pieces, thus completing the set. These are the pieces that you got out of all three DLC parts. 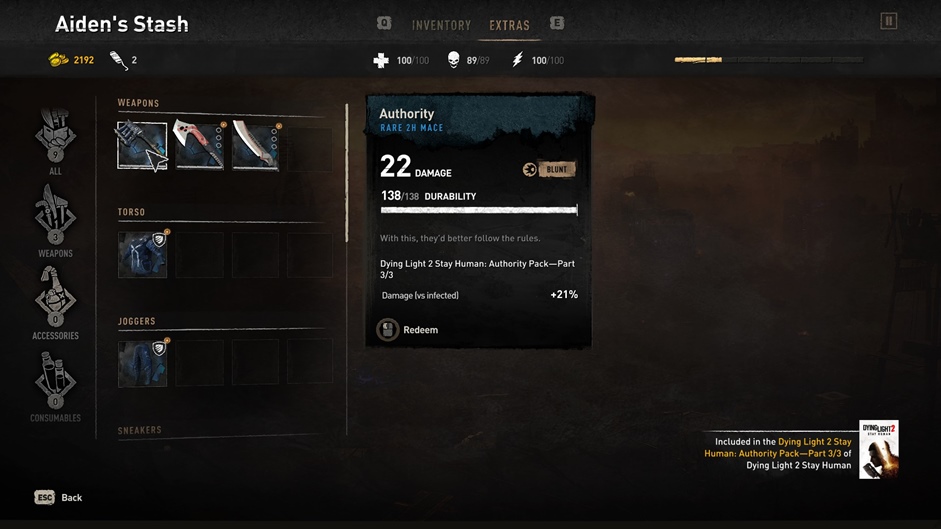 The Authority Pack Part 3 DLC features a two-handed Authority hammer with a score of 6, and it doesn’t scale as of now. But these items are a very nice addition for both new and intermediate players in the game. Aesthetics wise, the two-handed authority hammers look cool as well. Make sure you modify this weapon with a Korek Charm to prevent them from breaking because the weapons from this DLC is not repairable.

So this was all about how to claim Authority DLC Pack Part 3 gear in Dying Light 2. If you think this guide has helped you, then let us know in the comment section below. Also, for more guides on Dying Light 2, keep an eye on Frondtech! Happy Gaming!