It has been a couple of weeks now since the Dying Light 2 game has been released. And we were very excited to play it from the launch day itself. This game is a follow-up to the original 2015 Dying Light game, which again merges the zombies with parkour mechanics along with a stealth element added in their latest edition.

Although we faced some startup issues earlier, you can address them here. However, with recent patches, the game is performing well. This new Dying Light 2 game also has its very own stealth elements built-in if you want a much quieter approach.

The second part of the Authority pack DLC is already here. The veteran players of the Dying Light franchise will remember the free DLC weapons released for the game in the last instalment, and it seems the new Dying Light 2 game is going to follow the same path as well. Techland earlier promised a story expansion DLC, but the release date is still unknown.

However, the second part of the Authority Pack DLC is out on Steam now. It is again free to play expansion, and you don’t need to purchase any season pass to claim the Authority DLC Pack 2 Gear in Dying Light 2 as long as you own the game.

The new Downloadable Content for Dying Light 2 is called the Authority Pack, and it comes in three parts. It is free to play expansion and the DLC will get downloaded and installed whenever you click the update on Steam. It is a very small update that adds the Authority pack items into the game, which includes both cosmetics and weapons. Once you update the game on the Steam platform, you are good to go and claim the in-game items. Visit the nearest Stash, you will have it displayed on the Extras Tab.

There are three parts to this DLC. 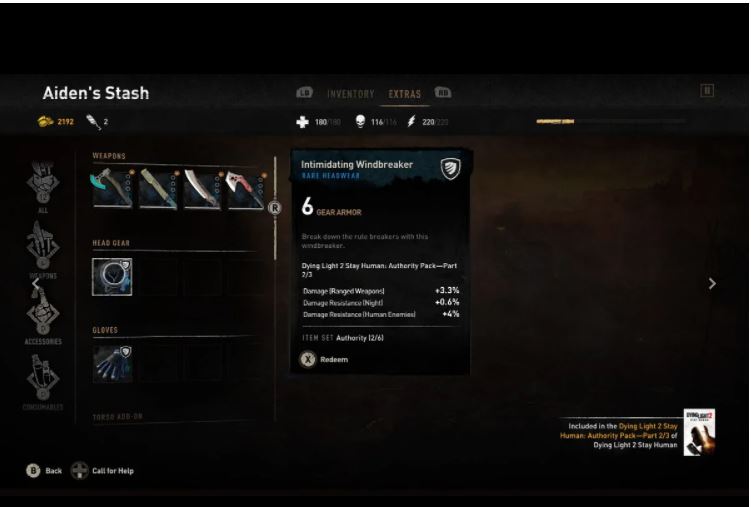 Please note that each of these outfits would give a resistance of 4% from human enemies. You can get an additional 6% extra resistance when you complete the full DLC set.

The Authority DLC Part 2 gives the next three pieces of the DLC which makes a total of six pieces. And one more piece is remaining to complete the entire set of 7 Pieces.  These are the pieces that you get out of all three DLC parts.

The Part 2 DLC features the gears with an armour score of 6, and it doesn’t scale as of now. So these items are pretty much awesome if you are a new or an intermediate player in the game. Yes, it looks pretty awesome as well. One thing to keep in mind is that to claim the bonus stats on your outfits, you have to collect the full DLC Set. Also, make sure to modify the weapon with a Korek Charm to prevent them from breaking because the weapons from this DLC is not repairable.

So this was all about how to claim Authority DLC Pack Part 2 gear in Dying Light 2.