Just like other “Borderlands” games, Tiny Tina’s Wonderlands is all about awesome weapons and bosses. And the game has a lot of them.

Every single boss in Wonderlands is different from the other. They have different mechanics, different damage types, and you deal with them in different ways. Some are easy to beat, while some can give players a run for their money.

Chaos Chambers is actually the endgame activity of Wonderlands. So, the bosses you meet there are quite difficult to beat, most of the time. You cannot just go and defeat them without a proper build, at high Chaos Levels.

But in this article, I am not talking about the regular bosses. We are going to be taking a look at the Secret Raid Boss, Gloopathoth, Keeper of the Abyss, and see how you can beat it.

How to Beat Gloopathoth in Tiny Tina’s Wonderlands

Gloopathoth is actually a secret Chaos Chamber boss, that you won’t probably see, unless you do the necessary steps required to summon or spawn her. Here is a complete guide on how to solve the puzzle and summon Gloopathoth.

Gloopathoth is actually a form of Tina, that she transforms into, inside the parody world of Wonderlands. She is not one of the hardest bosses that you will face in the game, but a rather tedious one.

Initially, the boss will not take in a lot of damage. Unless you have a build like Moxsy, that allows you to do millions of damage, don’t bother spending your ammo. Keep shooting here with something like the Masterwork Handbow, if you want to. During this phase, Gloopathoth will shooting ice orbs towards you. Don’t let them hit you. 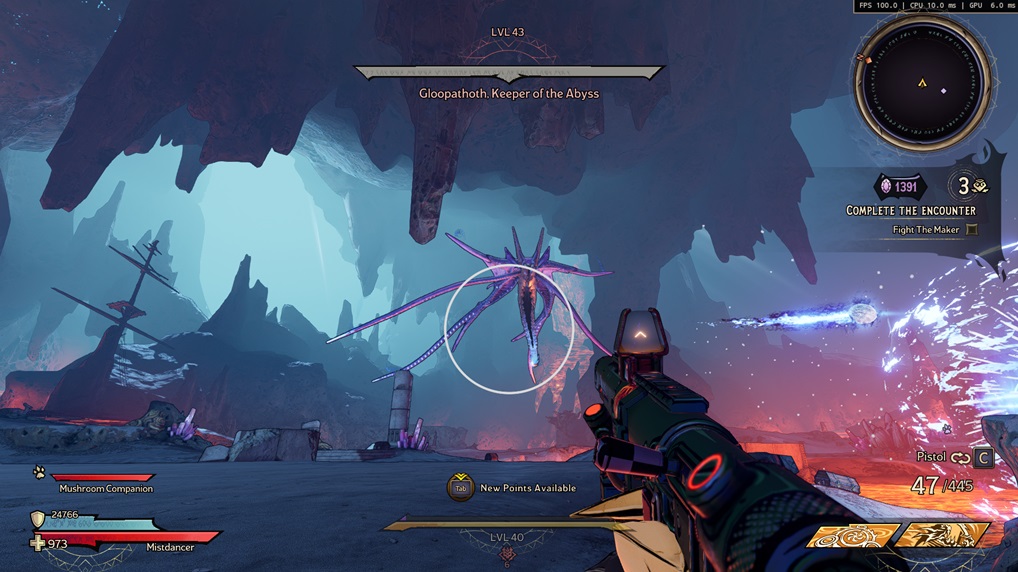 Once the boss has taken in a bit of damage, and is done shooting the ice orbs, she will become semi-invisible, move extremely fast to three set spots, and spawn a total of three blue orbs, that you have already seen while doing the summoning puzzle, on those spots.

Now, the boss will start shooting lasers at you, spawning those serpent-like enemies, etc. She will also shoot those ice orbs occasionally, that you have already seen before.

As soon as the explosion hits Gloopathoth, she will get stunned and drop on the ground. This is the real damage phase. Go ham, and shoot the boss with everything you have got. If you have a decent build, then you would be able to one-phase her. I used my Automagic.exe and the Buffmeister spell to get the job done.

If you don’t manage to one-phase her, don’t worry. She will just go back to the middle of the arena, and start dropping fireballs on you, which you can easily avoid. Just shoot her a few more times, and she should be done.

And that is all you have to do, to beat the secret boss, Gloopathoth, Keeper of the Abyss, in Tiny Tina’s Wonderlands.

Here is me, trying to beat Gloopathoth, for the first time. Check it out: