Forspoken Graphics Settings – This article will show you the Best Graphics Settings for Forspoken PC to fix Stutter and FPS Drops. These Graphics settings will help you balance out the performance without losing quality and the visuals in the game.

Forspoken PC has received a stream of criticisms, especially because of its performance during launch. The system requirements for this game are high, and it was evident that there would be stuttering and FPS drops. It makes no sense because not everyone in this world can afford high-end systems for Gaming, and since the recent rise in pricing, it has been tougher than ever. On top of that, there are other annoying technical errors. According to the latest Steam Hardware Survey, most gamers are still stuck with GTX 1050Ti, GTX 1060 and GTX 1650. We also got to see the RTX 3060Ti numbers have been pushed up, and people are playing on RTX cards now. For this reason, we thought of showing you the best graphics settings for Forspoken to fix Stutter and FPS Drops using the RTX 3060Ti GPU.

These are the best graphics settings for Forspoken. We tweaked and played around with these settings until we got a solid 60FPS on 2K (1440p) in the game. You can use the same settings on 1080p as well.

Before moving to the performance analysis, here is a quick and short video showing Forspoken’s performance when running on an RTX 3060Ti on the latest Nvidia Driver for Forspoken. We have achieved 60+ FPS with the settings we shared with you above.

To change the Graphics Settings in Forspoken, you need to: 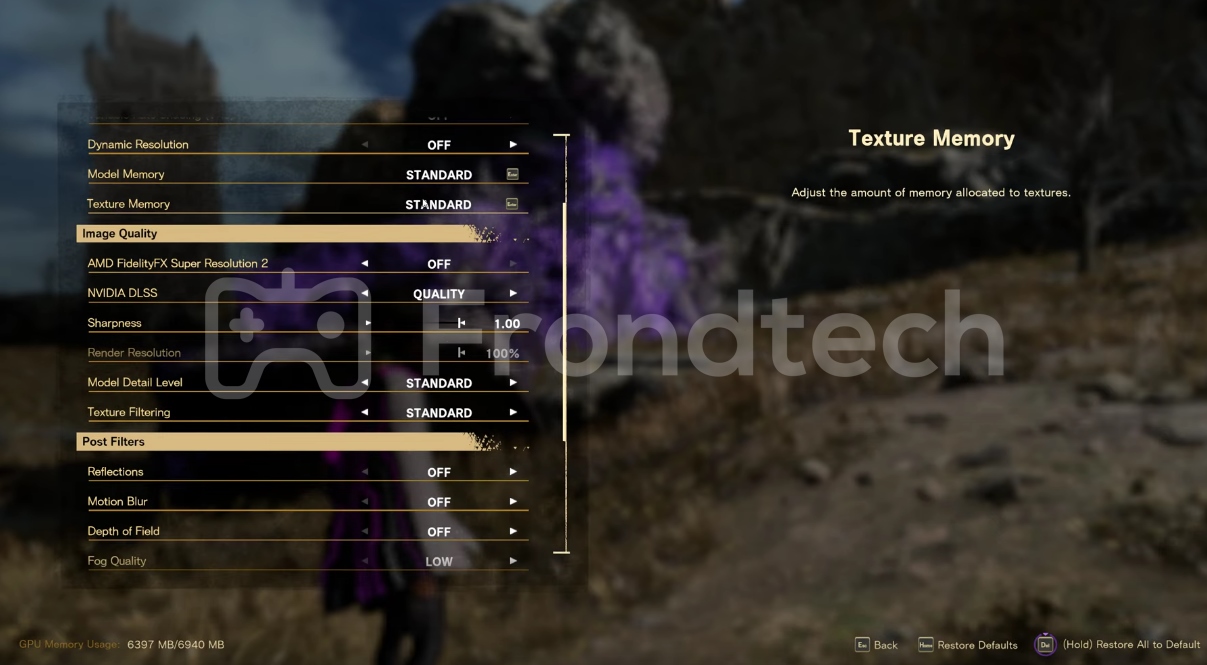 Specifications of our Test Rig

We always recommend running Forspoken at medium to high settings if you want to balance the visuals and the performance. To be honest, considering the system requirements, it is worthless to benchmark games using flagship hardware. It’s the midtier products that we should focus on because most of us are using those GPUs to run our games, and to be honest, we know that all games will run with no issues if you have a high-end graphics card.

The system requirements for Forspoken are somewhat on the higher side, but we tested it out on our mid-range Gaming PC. Here are the specifications of our rig running Forspoken

Here are the benchmark results that we have achieved.

For me, Forspoken is a good game for visuals and gameplay. Still, with the performance issues at launch, this can turn down many gamers, which it already did initially when they released the System requirements for this game. Running this game is no joke for low to medium-end Gaming rags. But we would like to address the fact that this game is a visual treat, and especially it is meant to run and look well if you have a very high-end system. Most of my friends who pre-ordered this game have ended up refunding because of the poor performance during launch, and they are using GPUs like the GTX 1050 Ti, GTX 1060, RX 570, GTX 1660, etc. Although after the recent patch, it is now much more stable.

But this game is quite heavy, and there is no way that older-gen hardware will be able to pull off this game on the highest settings to enjoy the visuals. This game looks wonderful, but that doesn’t mean it is optimized.

So, in my opinion, if you are using a GTX GPU like the 1660 or 1060, rather than refunding, wait for a couple of days before trying out the game because the developers are pushing in regular updates for this game. I would also like to add that this game got a sales hit because it is a Single-player with so premium priced.

Forspoken is an Open World Third Person Adventure Game developed by Luminous Studios and published by Square Enix. It is a graphically enriched game where you can explore and fight enemies in the beautiful regions of Athia, a magical land.