This guide is for players who are experiencing launch issues and crashes in Tom Clancy’s Rainbow Six Extraction PC. A lot of users are reporting these issues. So don’t worry, you are not alone.

Rainbow Six Extraction Won’t Start and is Crashing on PC

Rainbow Six Extraction is finally out on all major platforms. After being delayed so much, the game has finally managed to see the light of the day. The game is currently on all the consoles, and on PC via Ubisoft Connect, Epic Games Launcher and Game Pass. Anyway, some people are reporting some errors with the game. Some users are not being able to launch R6 Extraction, and for some, the game is immediately crashing after starting. Now, this is still understandable for users who don’t have systems that match the system requirements of R6 Extraction. But, even high-end users are facing this. Here are some fixes you can try:

Update your Graphics Drivers to the latest ones

Nvidia has already released a Game Ready Driver for Rainbow Six Extraction on January 14, 2022. The Version is 511.23. This new Game Ready Driver provides the best day-0 gaming experience for Tom Clancy’s Rainbow Six Extraction, which utilizes NVIDIA DLSS to maximize performance and NVIDIA Reflex to minimize latency. You can download the latest update via the Geforce Experience app, or you can download and install it manually, from this link.

AMD has also released a driver optimized for R6 Extraction PC on January 18, 2022. The version is called Adrenalin 22.1.2 Optional. You can download it from this link, or via AMD Auto-Detect. Here are the release notes:

There is a chance that the launch issues or crashes are being caused by some missing files, or some corrupted file in the R6 Extraction install directory. And, there is only one way to spot and fix them. Use the file verification feature of the launcher you are using to fix this issue.

If you have installed Rainbow Six Extraction via Ubisoft Connect (previously known as Uplay), then here is how to do it:

If you have purchased Rainbow Six Extraction on EGL, then here is what you need to do:

Do not run Overclocked GPU or CPU

If you were not here during the Far Cry 6 launch, then let me tell you, the Ubisoft Connect Overlay was wreaking havoc everywhere. It was causing crashes, launch issues, and weird bug that constantly showing an error message saying “Low amount of available VRAM”. And trust me, just disabling the Ubisoft Connect Overlay, fixed it all. You have to remember that Ubisoft Connect is still a comparatively newer launcher, which lacks the stability of Uplay. So expect these kinds of problems frequently.

To turn off game notifications:

First, make sure that you have logged in to Windows 10 using your administrator account. Now, here what you need to do. Go to the folder where you have installed Rainbow Six Extraction.

Look for the R6-Extraction.exe file > Right-click on it > Select Properties > Click on the Compatibility tab > Now tick “Run this program as an administrator”. Save the setting, and start the game by double-clicking on the executable file. 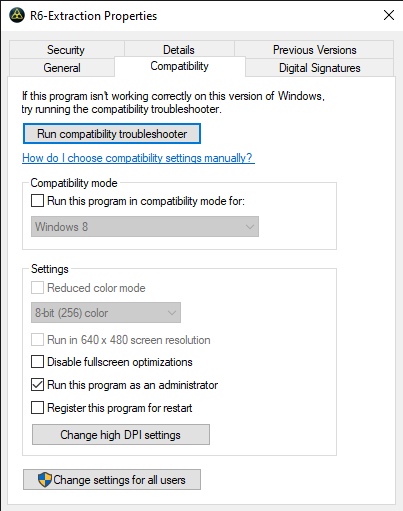 There is a chance that your Visual C++ redistributable hasn’t been installed correctly. Therefore, I would recommend that you update it. This will fix the “vcruntime140_1.dll missing” or “MSVCP140.dll was not found” errors, you are getting.

There’s a huge chance that your antivirus program is blocking R6 Extraction from launching. It may be giving you a ‘False-positive’ or ‘Malware’ message. Make sure that Extraction is not being blocked by your antivirus. Add the .exe file of the game to any whitelist feature in your antivirus.

Certain Microsoft services or third-party software running in the background can cause interference with your games. Please disable all programs temporarily, either manually or by performing a clean boot of your system. If the issue does not occur after disabling all programs, begin to re-enable them one by one. Repeat this until you come across the issue again – the last startup item you checked will be the one interfering with your game. Please note that this process will likely lead to disabling the firewall and security software. Once you have finished testing the game, do not forget to re-enable it.

Set the Video Settings of R6 Extraction to the lowest possible

This step is only for those, who are being able to start the game, but are crashing as soon as they start playing the game. There is a chance that a certain video setting is causing the crash, because it is set to a level of quality, that your GPU is having trouble coping up with. 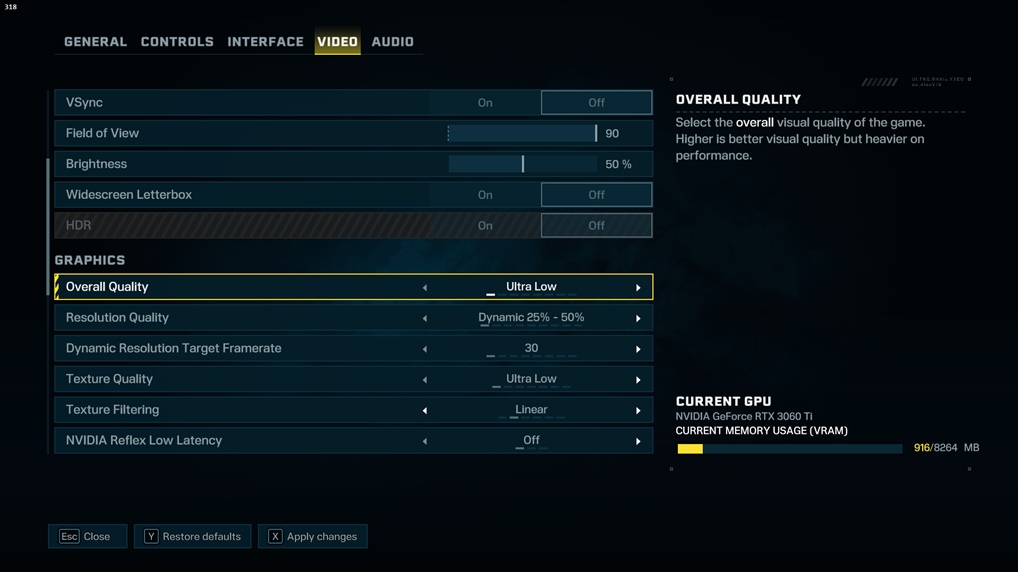 Go to Options > Video > Set “Overall Quality” to “Ultra Low”, and DLSS to “Quality”. And start playing the game. If you don’t crash, just raise the quality to the next preset, which should be “Very Low”, restart the game, and start playing again. Continue doing this until you find the setting that is causing the crash.

Fresh Installation in a different drive

If things are not working properly, then, go ahead and do a fresh installation of R6 Extraction. Yes, I know this is not the most convenient step. But trust me, this is the best thing to do in this situation.

If you think this guide has helped you, then let us know in the comment section below. And for more R6 Extraction guides, keep an eye on Frondtech. We will be covering every single technical issue of the game on the launch day. Good luck!