Evil Dead crashing and won’t launch – Saber Interactive’s new Survival Horror title, Evil Dead, is finally here. Evil Dead 2022 is directly based on the popular Evil Dead Franchise. But, this game is nothing like the old ones.

Evil Dead The Game is a completely online multiplayer title, that features both co-op and PvP. In fact, the Single-player mode also requires an internet connection. Which, if you ask me, is not a great move.

Now, the Evil Dead series is a creation of none other than, Sam Raimi. And, the franchise has fans everywhere. Don’t get me wrong, The 2022 version of the Evil Dead game is good. The only issue is, that the game has some technical issues.

Evil Dead is crashing at startup for some people on PC, and for some, it won’t launch. The good thing is, that many people from the community have already recommended some fixes for that. Check them out. 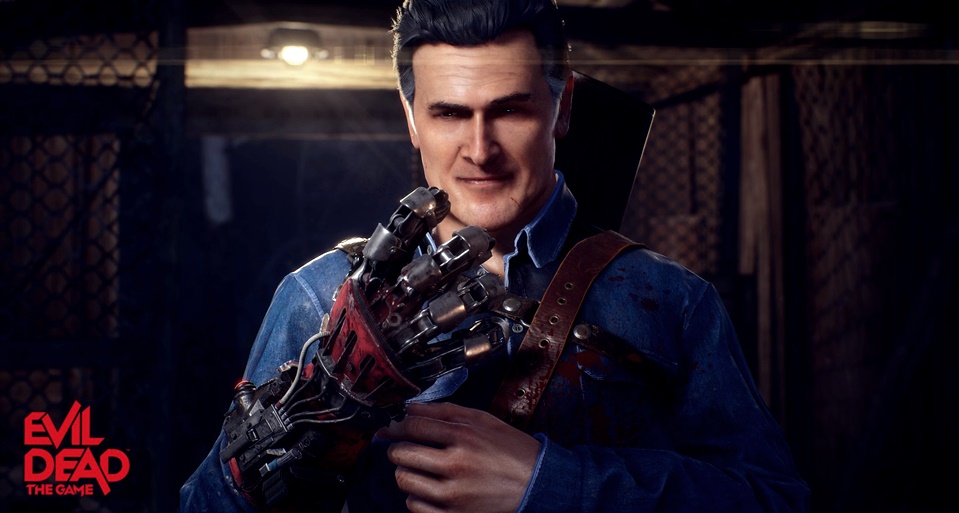 Compare the System Requirements of Evil Dead with your PC Specs

Have you checked out the system requirements of Evil Dead The Game, and made sure that your hardware specifications can support the game flawlessly?

Here are the officially recommended PC requirements for Evil Dead:

And, here are the Minium Requirements: 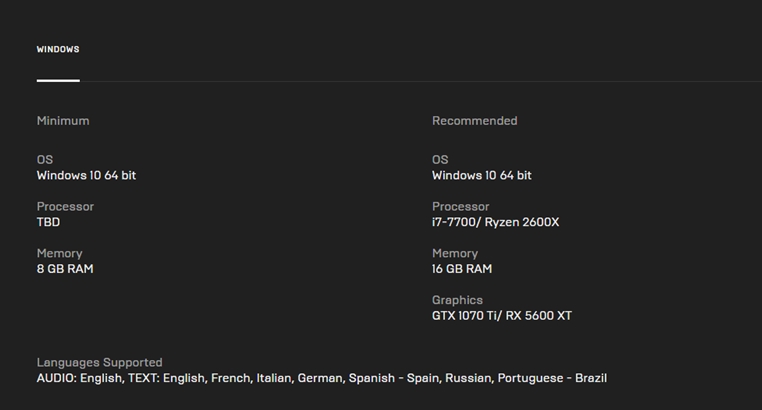 As you can see, the game requires you to have something that is similar to the 5600XT or the GTX 1070 Ti. If you ask me, those are not entry-level GPUs.

As soon as you launch Evil Dead the game, the game will get minimized, your default internet browser will auto-open, and you will get directed to a link, that will show something like this: 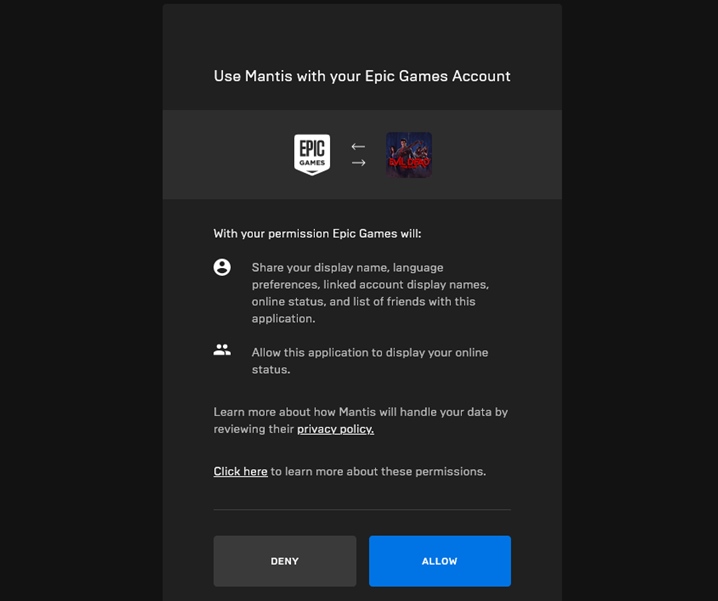 Make sure, you “Allow” this prompt. Otherwise, you won’t be able to play the game.

Evil Dead The Game, unlike Back 4 Blood, is one of those games that does not have support for DX11. You need to have DirectX 12 in order to start this game. Also, if you are on Windows 7 or 8.1, then there is no point in reading this article. In order to check the DirectX version on your system: 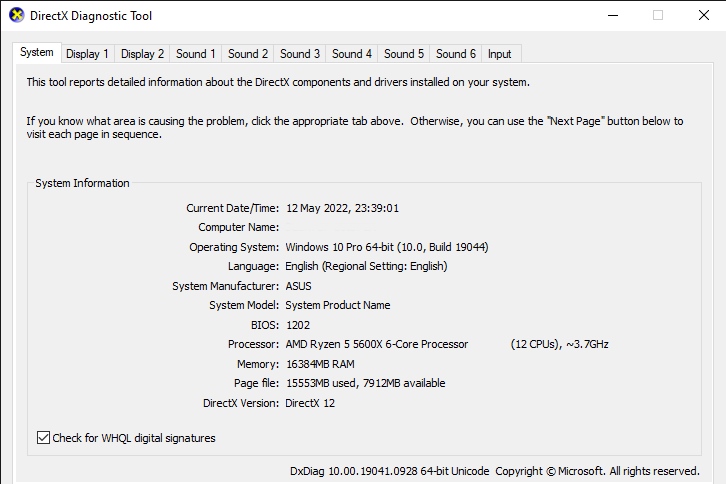 If you are still sitting with Windows 7 on your PC, then I would highly recommend that you upgrade to Windows 10 64-bit. I am using the latest build of Windows 10(Version 21H2, Build 19044.1645), and I haven’t had any issues launching the game on any of my three PCs.

Nvidia has already released a Game Ready Driver for Evil Dead: The Game. The version is 512.77. You can download it from this link or directly via GeForce Experience. 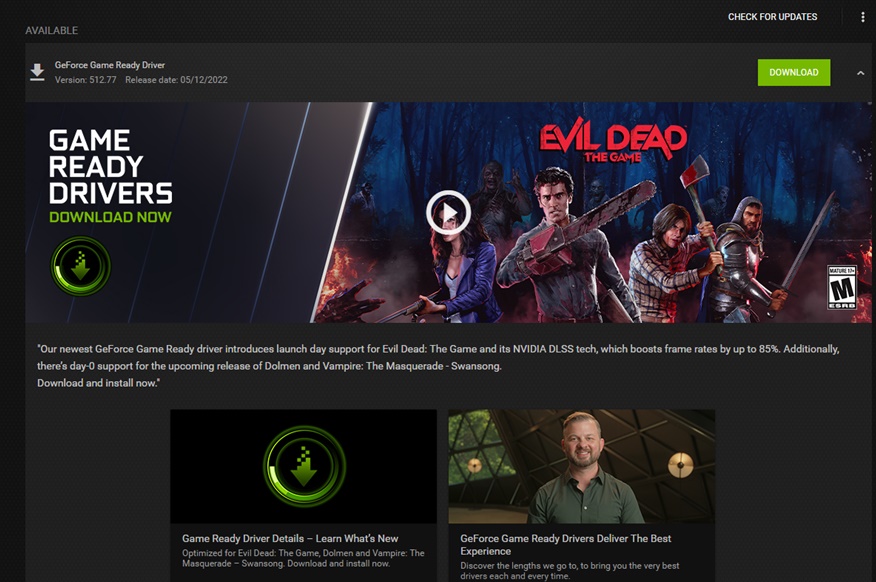 AMD has not yet released a driver specifically optimised for Evil Dead. I will update this article with the correct version, as soon as they do.

Close Rivatuner Statistics or MSI Afterburner, if you are using it

Recently, Rivatuner and Afterburner have been having problems with a ton of AAA games. A lot of people use these tools to monitor their system’s performance. But recently, too many complaints have started popping up, where people are reporting game crashes due to Rivatuner.

So close these applications, restart your PC, and try launching Evil Dead again.

In the process of trying to start Evil Dead, if you are getting errors like “vcruntime140_1.dll missing” or “MSVCP140.dll was not found”. Then, you are missing the correct version of Visual Studio. Please try downloading and installing the latest version of Visual C++ redistributable, as there’s a chance it hasn’t been installed correctly.

Just disable your Anti-Virus software temporarily, and try launching Evil Dead. If you see that the game is still crashing at startup immediately, then the AV software is not the issue here

Verifying the files of Evil Dead via the Epic Games launcher could fix any sort of technical issue that you are having. Here is how to do it:

Since Wonderlands is almost close to 10 GB, the verification process might some time, and your CPU usage might also shoot up to 90% or something. Be patient and try to avoid using any other application during the process.

Use the .exe file of Evil Dead to launch the game directly

Instead of launching Evil Dead via Epic Games Launcher, go to the location where you have installed the game. And launch the game directly by double-clicking on EvilDead.exe. You can also try launching the game as admin. Just right-click on EvilDead.exe, and select Run as administrator.

Use the MUX Switch on your laptop

To fix Evil Dead crashing on your gaming laptop, make sure that you use your MUX switch, and enable your Discrete Graphics. Most of the time, the laptops run on Hybrid Mode. Therefore, unless you choose to run your laptop solely on your GPU, it will keep on using the integrated GPU occasionally.

So, if your laptop is not fast enough to switch to the Discrete GPU, as soon as you launch Evil Dead, it will end up crashing. Different laptops have different ways of switching between GPUs. Just Google your Laptop’s model, and check where the MUX switch is located.

I am using a Lenovo Legion 5 Pro, and I can easily do it by visiting the Lenovo Vantage app.

So, that is all on “How to fix Evil Dead Crashing at Startup and Won’t Launch” If you think this guide has helped you, then let us know in the comment section below. And for more Evil Dead guides, keep an eye on Frondtech. We will be covering every single technical issue of the game on the launch day. Good luck!