Destiny 2’s latest season, the Season of Seraph (Season 19), was released on December 6th, 2022, and will be in play until February 28th, 2023. The season reveals a lot of new features that have been brought to the game, including a new exotic mission: Operation Seraph’s Shield. Season 19, like the previous seasons, brings a bunch of new gear for players to acquire and enjoy.

It’s Destiny. Every season technically brings a ton of new weapons for the players to enjoy. In this particular article, we’ll be talking about a kinetic slot (Pulse-type) weapon that has been included in the season of Seraph, the Disparity.

The weapon is an Aggressive Frame Kinetic-slot Pulse Rifle. The gun has two origin traits you’ll be able to choose from and is a type of weapon that you could essentially use for whatever purpose you deem fit, this makes it important for you to have the weapon in your arsenal, and once you do have it, you’ll have to make sure that you get the most out of it.

Keeping up with the same, in this article by Frondtech, we’ll guide you with the Disparity God Rolls and where you could find the weapon:

We’ll be dropping stats followed by carefully chosen God-rolls for the weapon down below: 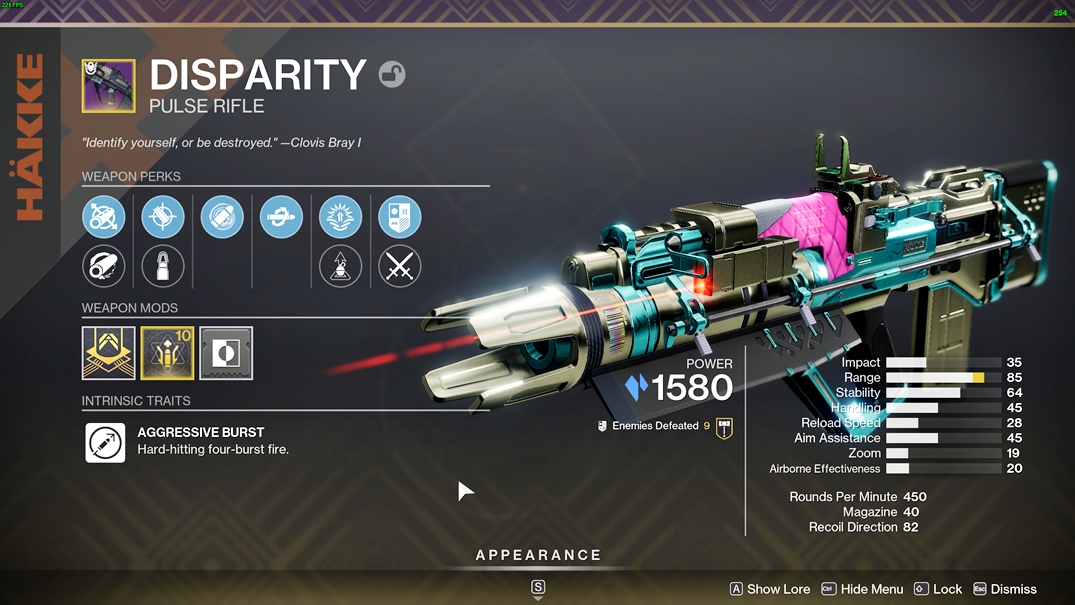 The Disparity is a rare find to have, so getting your hands on one of those could prove to be a little more challenging than you might have anticipated, but it is also to be noted that it’s worth the extra efforts you put in due to multiple features the gun offers.

As we mentioned earlier, the weapon has two origin traits: Ambush and Hakke Breach Armaments. Here, Ambush is a new origin trait that offers more range, better handling, paired up with higher damage output during the opening of a combat. This particular perk automatically activates if you haven’t shot at anyone or no one has shot at you for a while.

Stasis users will be at a general advantage due to the headstone perk. This is due to the fact that Disparity handles range pretty well, which makes long-range combats or headshotting from a long range much easier.

How to get the Disparity is Destiny 2 Season 19

There are two ways you could get your hands on the Disparity:

If you’re looking to follow the first method, you’ll have to perform in heist Battlegrounds. Upon doing the same, you’ll be receiving a normal or a seraph chest as a drop, there’s a chance that you find the Disparity in these.

In the second method, you’ll get a reward from the Operation if you either participate in Archimedes story mission or by decoding the Umbral Engram at the Clovis Exo in the H.E.L.M.

That’s everything we had regarding the Disparity’s whereabouts and the God Rolls.

If you think this guide has helped you, then let us know in the comment section below. Also, if you have any additions to make regarding this topic, then also you can comment below. And for more Destiny 2 guides, keep an eye on Frondtech. Good luck!