Angemon Digimon Survive – Digimon Survive is a tactical role-playing game developed by Bandai Namco Entertainment. Although the game is available on different platforms, it is mainly optimized for the Nintendo Switch.

It is based on the visual novel, and the game comes with multiple ending choices and features gameplay types like Drama Parts, Search Action, Free Action and The Free Battle. This game is primarily based on turn-based battles.

One of the most iconic and majestic Digimon is the Angemon. This Digimon is a Winged character that was first featured in a TV Series and has been a part of it ever since.

Since this is one of Digimon’s most important characters, this article will guide you on how to get the Angemon in Digimon.

It is set in a mysterious world filled with demons, monsters, and deadly battles and will test your survival skills. Your choices will affect your gameplay, and you can build your team by asking opponents to fight alongside you.

How to get Angemon in Digimon Survive

You will be able to come across Angemon during the free battles in Digimon Survive. You will be able first to encounter Angemon at the Amusement Park when you reach Part 4 of the game. Once you discover a free battle with an Angemon, make sure you jump straight into it and answer all the Digimon questions to get Angemon quickly. 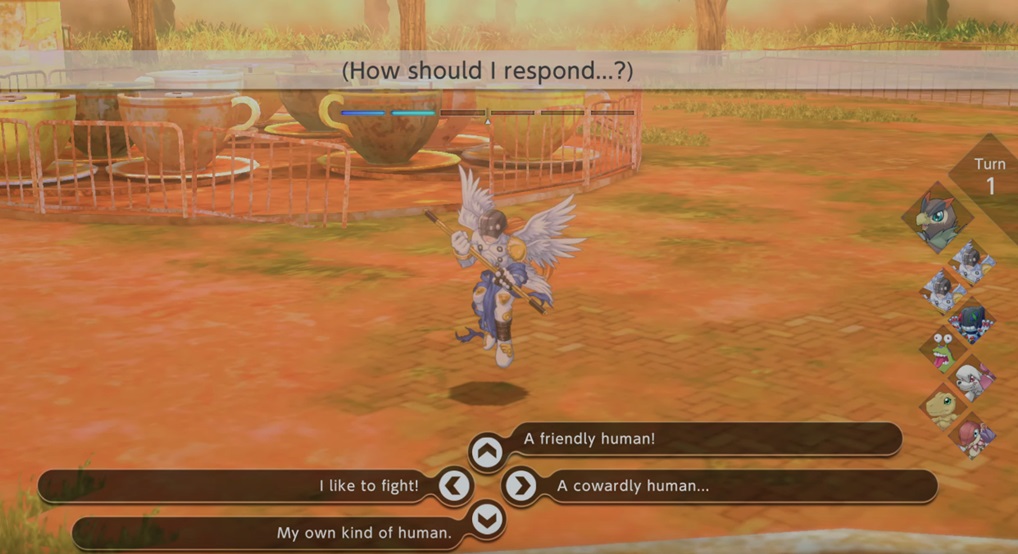 Here is a set of questions that you must respond to get Angemon.

Once you answer the questions, you will have a chance to recruit Angemon into your Digimon Arsenal.

Remember that you only have to choose the best answer for all the Angemon questions. But that doesn’t guarantee you will get it because the Digimon may disappear and refuse to reappear. But this is the only viable way to get Angemon directly. Other than that, there is another way to get Angemon indirectly.

Get Angemon by evolving it from Patamon

If you cannot get Angemon directly, you can try digivolving it from a Patamon. Once you get a Patamon, you can use the Enlightenment Slabs to get Angemon.

This is one of the ways to grow your Patamon, but you need to spend some time optimizing the Harmony so that the evolving option is available for you.

So this was all about how to get Angemon in Digimon Survive.

If you think this guide has helped, then let us know in the comment section below. And for more Digimon Survive guides, keep an eye on Frondtech. Good luck!