The “Down on the Street” mission is bugged in Cyberpunk 2077. Is there a fix? Let’s find out.

It has been almost two months since Cyberpunk 2077 got released, and I have to say, this is undoubtedly one of the roughest game releases I have ever seen in my life. I really don’t want to go into the details again. Because I am pretty sure the whole world knows at this point, that what is going on.

The game already has a lot of bugs and there are more popping up every day. But I am specifically talking about the Takemura bug in Down on the Street mission. There is a part in the Down on the Street mission where you get in a call with Takemura. But the mission is getting bugged for a lot of players in this part. As a result, Takemura is getting stuck on the left side of the screen for many players. There is no option to disconnect the call. And because you are in a call and a mission is active, doing other missions and activities is completely out of the question.

Here is a proper description of the bug by a CDPR Forum user called /mcdima331:

Stuck in a call with Takemura

After completing the mission prior to Down on the Street I’m stuck in a loop call with Takemura asking two options from the initial calls you can have with him. This seems to happen after getting out of the van with him to meet Okada on jig-jig street. Calling him again to try and force end the conversation doesn’t seem to work as he won’t answer it, and the dialogue options never go away. Saving then loading it back from the main menu doesn’t seem to work either. Anyone know the reason why this happens, or a potential fix?

Another user with the name /BranchOffBush took the time to further elaborate the bug:

Quest: Down on the Street
When I boot up my save I get a call immediately from Takemura and he does not speak. I can’t use my phone for any other purpose. He just stays on my screen saying nothing. And the quest. Well you can see what it says there. Any ideas for getting around this bug. Combat does not help… I dont think, I eliminated a bunch of Tyger Claws and the call did not go away. I could try some NCPD and run away. 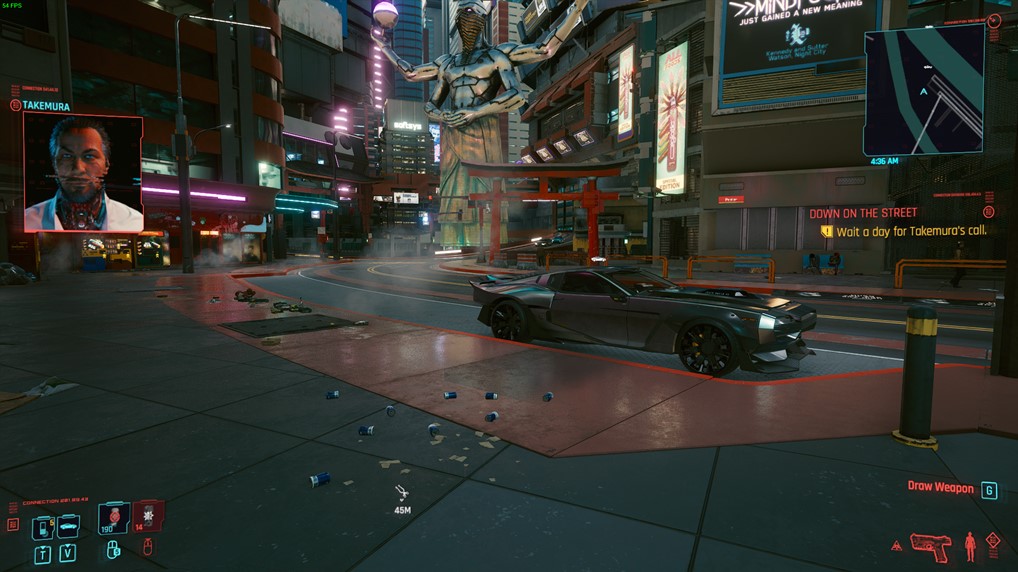 This is stopping players from progressing further in the game. This bug seems to have arrived after the latest Patch 1.1. It is actually hilarious because before this patch arrived, there was already a Takemura bug that is quite similar to this in the game. The only difference was, in the other bug Takemura wouldn’t even call. Patch 1.1 was supposed to fix this bug. But looks like instead of fixing the bug, it dropped another one.

Is there a fix?

No, there is no fix for this bug yet. But if you have been thinking that you are the only one in the party, not the case here. There is an enormous post regarding this bug on the CDPR forums. And you will find hundreds of people with the exact same issue commenting on it. Check it out here.

Yes, there is a workaround. But I couldn’t recommend that as it requires you to have saves from the time before you started the Down on the Street quest. If you do happen to have an early save then you can do this:

But I realize that this fix is not for everyone. You can obviously wait for CDPR to release an official fix. But considering how bad the situation is for them right now, I wouldn’t count on that. Also, if you end up finding a working fix, please let everybody know in the comment section below.

If you think this guide had helped you then let us know in the comment section below. And for more Cyberpunk guides, keep an eye on Frondtech. We will be covering every single technical issue and bug of the game. Good luck!