More than 8,000 enthusiastic Steam reviews have been left for Cult of the Lamb, and some gamers have predicted it will go down in gaming history as a classic.

The protagonist of the video game Cult of the Lamb, a cute but possessed lamb, is saved from death by a sinister deity. As retribution, he is required to found a cult and expand it by going on crusades, gathering resources, and exploring the game’s five zones to battle competing cults.

Not like any other game, if you ask me. A very different genre, there should be more games like this, I’ve got to tell you, haven’t heard of any other game like this, in a good way though haha, this game in my opinion could become a “cult” classic, see what I did there?

Now, let us address the topic that we’re composing this article for, which is, the best rituals in the game cult of the lamb. Why do you need to perform these rituals, you ask? Here’s why:

In the Cult of the Lamb, rituals play a significant role in maintaining your followers’ loyalty and devotion. They also assist in keeping your followers pleased if you intend to temporarily leave your cult.

Be aware that sermons serve a similar purpose and aid in maintaining your followers’ level of faith. However, Rituals have a cooldown as opposed to Sermons. Rituals have lengthy cooldowns and significant costs, so you can’t use them every day. Our suggestion is to always have a ritual ready to use as a fallback in case your sermons fail to save your cult.

We’ve got your backs though, we’ll analyze every possible ritual you can perform in this game and give you an overview as to which one is best! Here they are:

Cult of the Lamb Best Rituals 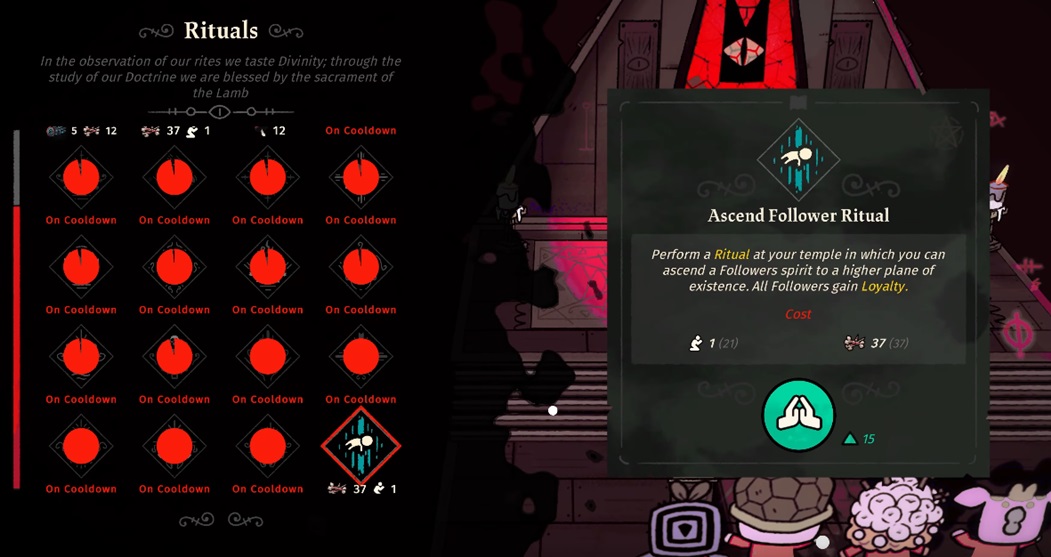 By sacrificing just one follower, you can use this ritual to increase the belief and allegiance of all the other followers. Since it is unlocked at the first level of Law and order doctrine, this ritual can be utilized immediately away. Even though it may appear chaotic, eliminating your disciple is a Ritual that must be performed.

Most frequently, you sacrifice an elderly follower, depleting the Cult’s resources while providing next to nothing in return. A follower should be sacrificed before he passes away when he gets old and is unable to work any longer. Passing of a follower might weaken the faith of other members and bring about illness inside the cult.

Alms for the Poor ritual: 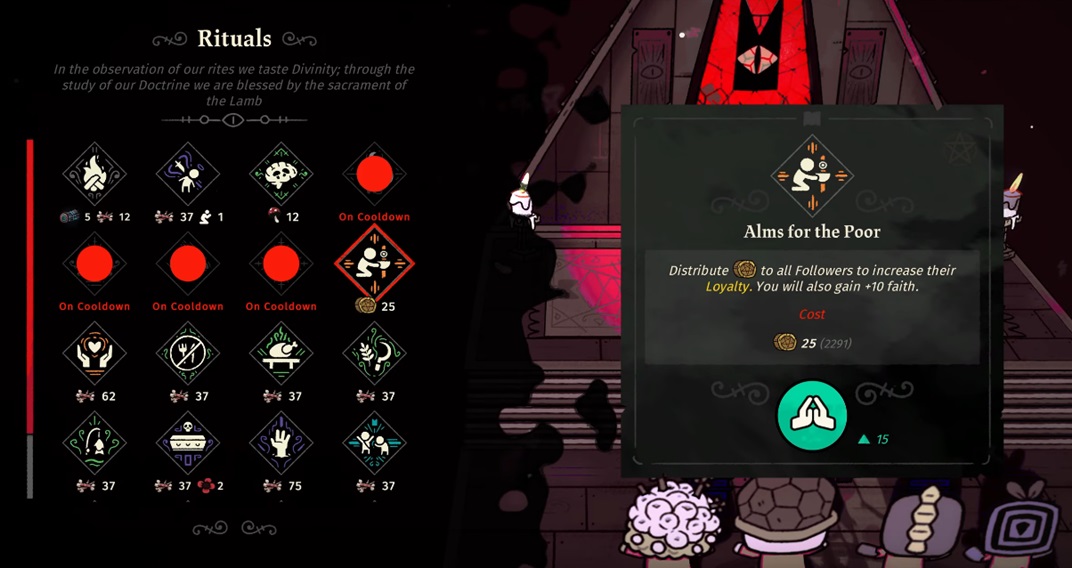 Each Ritual in the Cult of the Lamb is expensive and demands numerous bones. The least expensive Ritual in the game is Alms for the Poor. It does not, however, boost devotion and faith as much as the other Rituals. It needs Gold, which is a simple resource to get.

This Ritual is frequently used by players because it costs the least and is available for only 25 Gold. To increase the loyalty and respect of your supporters for you, give it a try. 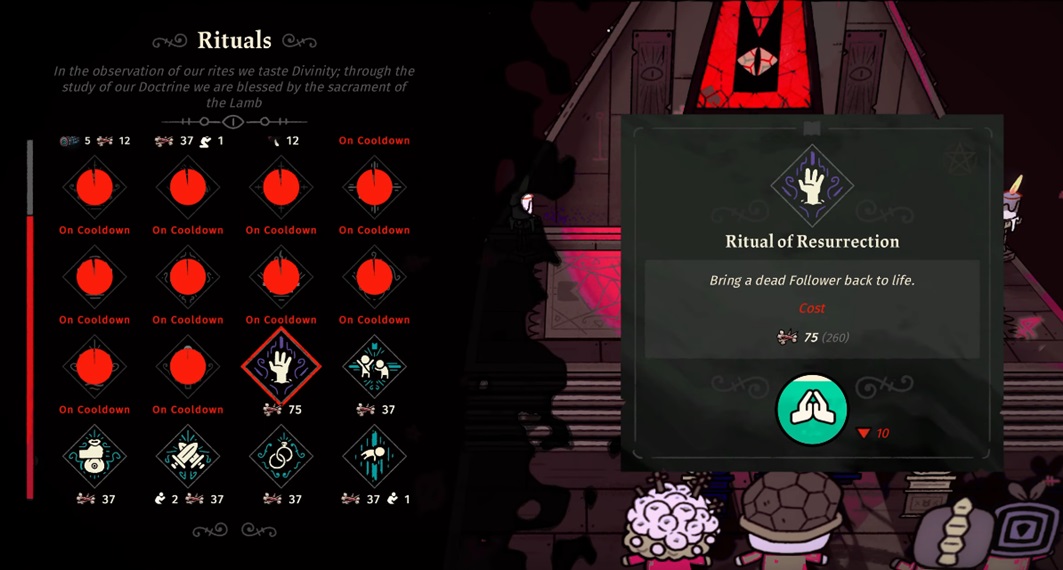 A ritual called resurrection is utilized to raise the followers that have passed. At doctrine level 2, Afterlife, it becomes available. The best part of this ritual is that the followers can return with all of their equipped items and loyalty rankings intact. You can invite your favorite or most dependable followers back. 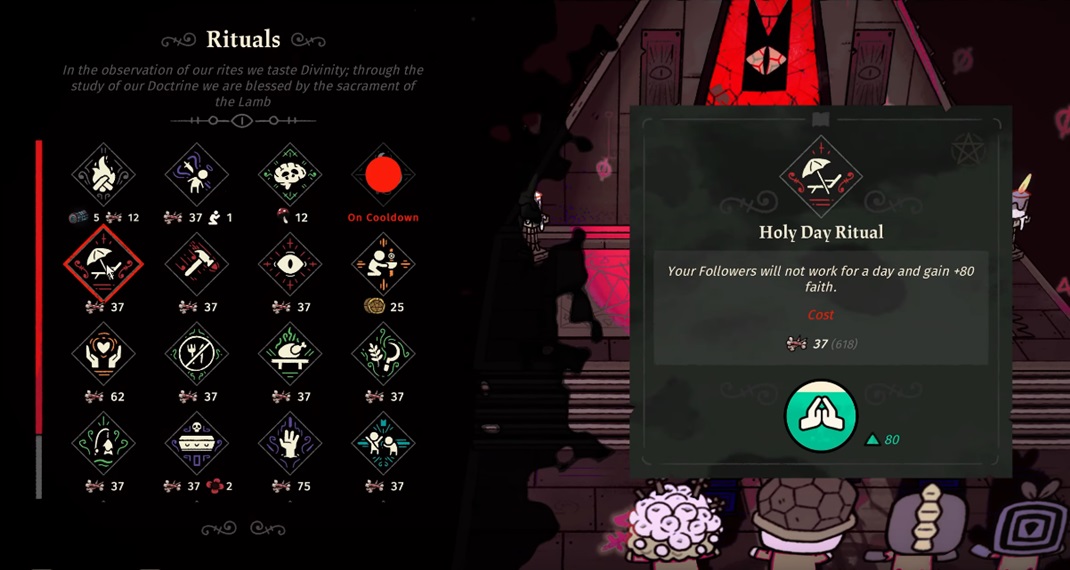 The largest Loyalty and Faith-boosting Ritual in the Cult of the Lamb is the Holy Day Ritual. It boosts a follower’s faith by more than eighty percent. In this ritual, you designate a day on which your adherents will be idle the entire day—no resource gathering, no worship creation.

At tier four work and worship doctrines, which call for numerous commandment tablets, it can be unlocked. This could be viewed as the Ritual’s disadvantage due to its delayed unlocking.

If you are having issues with the Cult, you should invest in this Ritual since it will help you get out of a terrible position, and it can quickly restore lost faith in your supporters.

And the final one, Loyalty Enforcer Ritual: 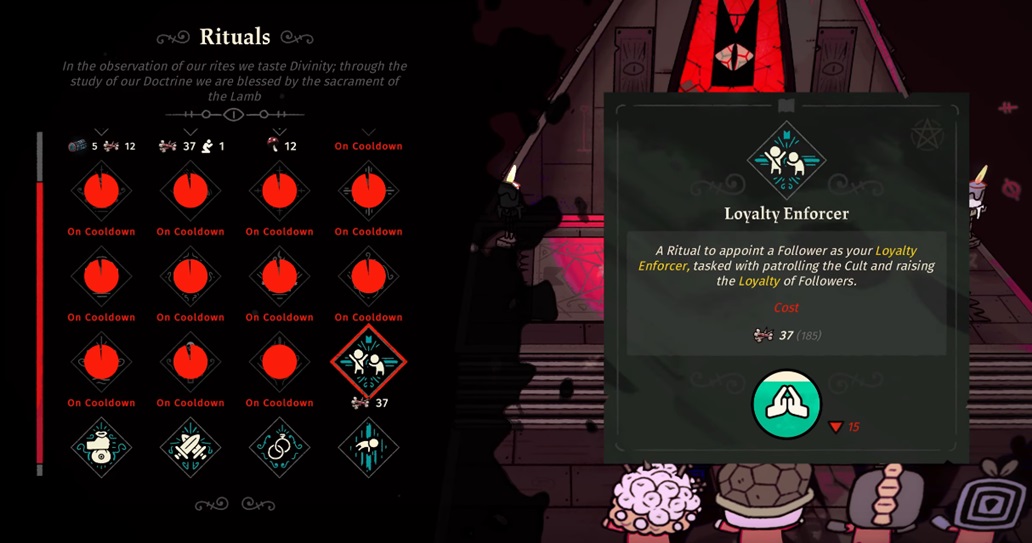 You will designate a follower to patrol the cult and boost the loyalty and faith of the other members in the Loyalty Enforcer Ritual.

During the law and order doctrine, you can unlock the Loyalty Enforcer Ritual. Starting this Ritual will cost you roughly 75 bones.

And that’s pretty much everything we’ve got for the best ritual in the cult of the lamb, for more guides, keep visiting us at Frondtech!