KBI Multiversus – MultiVersus is a 2v2 platform fighter in which players battle on different levels and attempt to knock their opponents outside the arena’s boundaries, with characters being knocked further the more damage they take. If you are a Super Mario Bros. Brawl fan, you should try this one. The game is currently under the Early Access beta and is available for the major platforms.

Multiversus is still in Open beta mode, so obviously, you will face some issues here and there. The game provides a very detailed tutorial on how to play the game like a pro and features the most advanced training known as Knockback Influence Training or KBI to teach you how to protect yourself when you are about to get knocked off the area.

However, some players have reported that they have been trying to complete the KBI tutorial but cannot.

This is one of the highly requested guides as it is a prevalent and frustrating issue now and is specifically happening with most players on the PC.

So this article will guide you on how to complete the KBI Tutorial quickly in Multiversus.

What is KBI or Knockback Influence in Multiversus

The KBI or the Knockback Influence is a type of Maneuvering move which you will master while playing the KBI Tutorial.

KBI is a controlled and protected move that you will be able to perform when you are just about to get knocked out of the game area.

You will be able to use the opposite force after you are knocked off to lessen the momentum of the hit so that you don’t get knocked off the screen easily.

This Knockback Influence Tutorial has two built-in scenarios where it will teach you how to perform a Knockback influence.

How to complete KBI Tutorial quickly in Multiversus 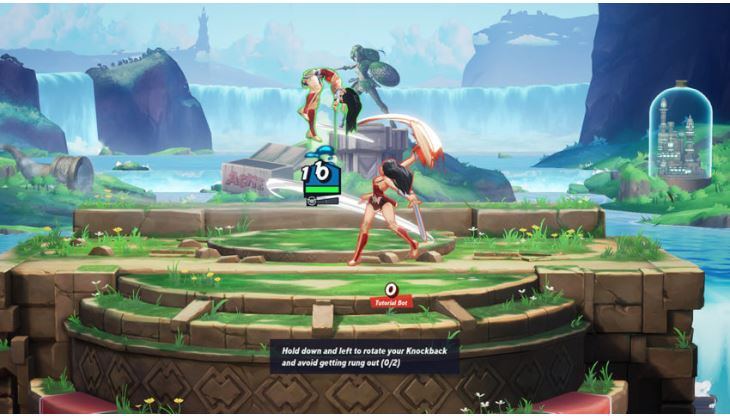 As we mentioned before, there are two stages in the tutorial.

The first one is pretty easy. The AI-controlled Reindog will continue knocking you off from different heights. Your main aim is to use the Knockback influence quickly.

It would help if you first aimed near a wall block to dodge the Reindog’s attacks. It is pretty simple, and you can do it in a matter of minutes once you have made this move on to the next part.

The second part of the tutorial is a bit tough. Here you will have to face Wonderwoman, and she will be using her Sheild bash to knock you into the sky.

The problem here is that sometimes it knocks you off the screen even if your player has 100 damage. So to fix this, if you are on a PC to activate the KBI, you will have to press the down button and the left button together and get to the dashboard immediately.

Similarly, if you are trying to complete it on the Xbox or the PlayStation, you need first to hold the two down and left buttons and immediately go to the dashboard when you are just about to get hit.

This will adjust your trajectory back to safety, and you will be able to complete the KBI Tutorial.

However, it doesn’t sometimes work for PC players because of the bug. I have also experienced the same bug, but the method I explained helped me complete the KBI tutorial on the third try.

If it’s still not working for you, then you can wait for the official fix from the developers.

Although completing this tutorial doesn’t add any game-changing skills, it is essential to note that you won’t have any benefits except clearing an objective.

You can get into the KBI tutorial, try it out a few times, learn the tricks and get back to the main game to try those moves out.

So this was all about how to complete KBI Tutorial quickly in Multiversus.