COD Vanguard crashing and won’t launch – It looks like Call of Duty: Vanguard is crashing for a lot of PC users. While players who are using powerful gaming rigs are not facing as many issues, low-medium end users are experiencing a fair amount. That is why I decided to come up with a basic guide that will show you some simple tweaks that you can try in order to fix the issues that you are having. Here is how to fix crashing and launch issues in COD Vanguard.

Another year, another Call of Duty game. And this time it is Call of Duty Vanguard. The game is finally here, and it is adding on to the hype that was already there, since the announcement of the trailer. People are thoroughly enjoying the title, and you can easily tell that by the booming Reddit page of Vanguard.

But as we all know, games these days don’t come without bugs and glitches. The same is the case with COD Vanguard. A lot of players have been complaining lately, that Vanguard is crashing constantly for them. And this problem has nothing to do with their PC hardware. That is why we decided to put all the fixes recommended by the community of COD on Reddit in one place, so that players don’t have to check multiple sources for them.

Check the PC requirements for COD Vanguard, and make sure that your hardware can handle it

If your system doesn’t meet the requirements for COD Vanguard, then the game would crash almost every time. Check out the system requirements, and decide for yourself: 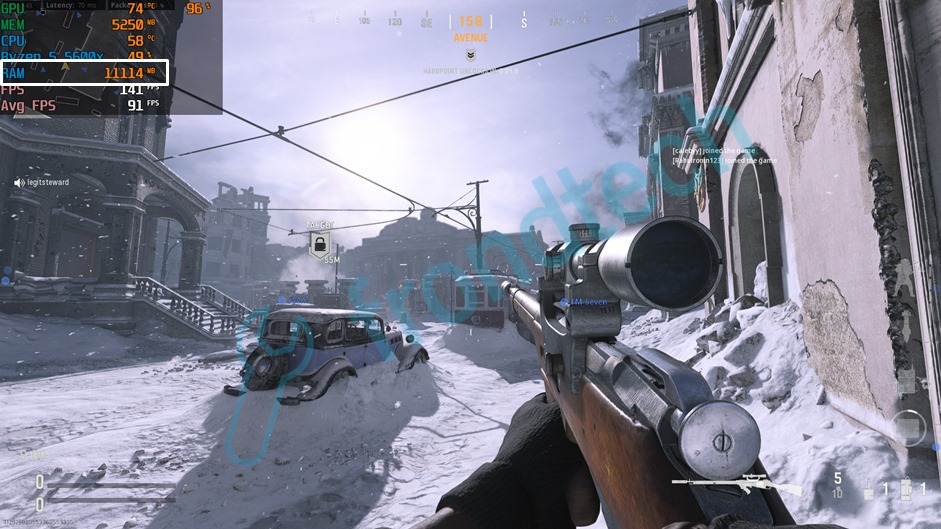 AMD has also released a driver optimized for COD Vanguard. The version is called Adrenalin 21.11.1 Optional. You can download it from this link, or via AMD Auto-Detect. Here are the release notes:

Doing this would also fix any DirectX or Direct3D errors in Call of Duty Vanguard.

[For Nvidia GPU] Update your GPU driver to version 496.49

Nvidia has already released a Game Ready Driver for COD Vanguard. The version is 496.49. You can download it from this link or directly via GeForce Experience. Here are the release notes:

Doing this would also fix any DirectX or Direct3D errors in Call of Duty Vanguard.

If had taken part in Call of Duty Vanguard beta, then I would recommend that you uninstall that first. Then go for the download and installation of the full version. Just set the Game Version to Beta on Battle.net > Click on the settings icon > Uninstall. 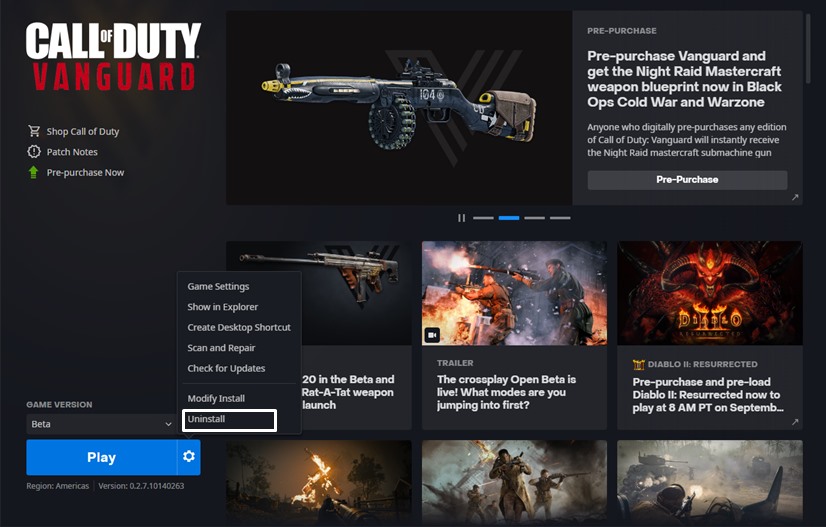 Basically, a lot of users are experiencing crashes in COD Vanguard because the different files of the different versions are conflicting with each other.

How to Repair COD Vanguard via Battle.net launcher

Battle.net launcher users have the feature to scan and repair a game available on the launcher. Same goes with COD Vanguard. This feature will verify the in-game files of the game and download the missing/corrupted ones. Here is how to do it:

Set everything to low

If you are facing crashes while playing a match, and not on the menus. Then there is a chance that a demanding setting is causing the game to crash. Set everything to the lowest possible. Start playing the game. Then keep on increasing your settings one by one.

If by any chance you are witnessing random crashes in Call of Duty Vanguard, then chances are it is being caused by an overclocking application or utility running in the background. A lot of games have been suffering from crashes lately due to applications like MSI Afterburner or Zotac firestorm. So it is best to stay on the safe side and run your graphics card on default speeds.

Are you sure that the Firewall or Anti-virus on your System is not blocking the game?

Windows Firewall might be blocking the game. I never faced this issue because I get a pop-up every time l launch a new game. It is supposed to be like this: 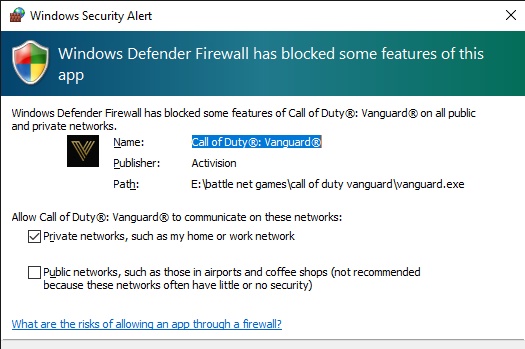 If you did not get a pop-up window like this, then you need to check whether Vanguard is in the block list of your firewall or not.

In some cases, the executable of Call of Duty Vanguard may be getting silently quarantined by some antivirus software, preventing the game from launching. You may need to disable Real-Time Scanning function or Real-Time Protection function of your Anti-virus to play. If you do not want to completely disable the software, then you will have to add the .exe (Vanguard Launcher.exe) of Vanguard on the Exceptions list of your AV Software.

Run the .exe file of COD Vanguard directly as admin

Avoid the Battle.net once and try to run the executable file or .exe file of Call of Duty Vanguard (Vanguard Launcher.exe) as admin, directly from the installation directory. Here is how to do it:

Microsoft is known for releasing a ton of updates for Windows. Some of them improve your experience, while some of them end up making thing worse. If you do not update your OS often, then there is a chance that you are currently sitting on a bugged version of Windows 10. Install the pending updates, as it would only increase the compatibility of your system.

If your laptop features a dedicated graphics card inside, then you need to make sure your laptop is using that instead of the low powered integrated one.

If your laptop has an Nvidia GPU, then here is what you need to:

Re-install COD Vanguard (If nothing else works)

If none of the fixes mentioned above work for you, then reinstallation is your last resort. Game installations go wrong all the time. A file might have gone corrupted during the installation process. And that might be the reason why the game is crashing for you. So do a fresh installation of the game once.

Wait for patches from Sledgehammer Games

If you have played the previous COD titles like, Black Ops Cold War or Warzone. Then you should know how the launches of these titles usually go. The release with a ton of issues that get fixed eventually. Give Sledgehammer Game some time, and I am pretty sure that Vanguard too will get necessary optimizations like the previous COD games.

These are all the fixes we have at the moment for people for whom COD Vanguard won’t launch or is crashing. We will be adding more soon.

One thing to keep in mind, none of these methods are advanced and are pretty basic. There is no guarantee that these steps will fix your problem 100%. If the problem you are facing is a serious one then the best option would be contacting the support. I would suggest that you take a look at the official Vanguard Reddit. You will find a lot of players discussing about these exact same issues.